Find Your Purpose. But Don’t Lose Your Mind.

What two reasons make the 10th of October a very special and important day? 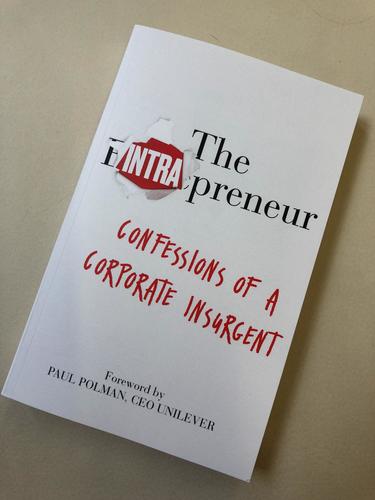 Well the first reason is that it’s World Mental Health Day.  Probably far two few of us, including me, knew that until relatively recently – and it’s meant to be my new specialist subject!  It’s a day aimed at growing awareness for mental health issues around the world and to help mobilise efforts around the cause. I’m writing this update from London where I attended the MadWorld Forum in London yesterday.  It was a day full of inspiring speeches from people like Sir Ian Cheshire, Chairman of Barclays, Sir Vince Cable, Professor Sir Cary Cooper and many others, all aimed at breaking the stigma and increasing awareness of mental health issues in the workplace.  It’s an issue that costs £70billion in the UK alone, equivalent to 4.5% of GDP annually.    Attempting to break the stigma was one of the main drivers of writing my book, The Intrapreneur, which you helped me launch on 10thApril.   Which leads me to the second reason as to why 10thof October is an important date.

The brighter sparks amongst you will have already done the math(s).  Today marks the six month anniversary of my precious book’s appearance in the world and I realise that you’re overdue an update on how it’s doing.

The first ten days post launch were not great for my fingernails.  Would anyone buy it?   Would anyone read it?  More to the point, if they did, would they like it?  Sure, I was expecting some politely positive feedback from family and friends accompanied by a pat on the back and a “jolly well done.  It was…..erm… super etc”.  But what about the opinions of “the crowd” – real people, who have no axes to grind and no reasons to spare my feelings in their feedback.

Well, to my great pleasure, the initial feedback was very positive and over the past 6 months, there have been over 50 reviews on Amazon.co.uk alone, nearly all of them 5 star. I can assure you my family and circle of friends is not that big! To my great delight, this little book that absorbed so much of my time these past 2-3 years seems to be resonating with the people who read it.   I can’t thank you, my supporter tribe, enough for helping to fund the book and make it possible and to all of you who have reviewed it so positively.  If you haven’t got round to it yet, I’d be extremely grateful if you could take just a couple of minutes to write a couple of lines on Amazon (and paste into Goodreads too if you’re feeling extra generous).  It’s so important to how their secret algorithms work in terms of recommending it to other readers.  My goal is to get to 100 reviews by the end of the year and given this update is going to over 300 supporters, I’m hoping that’s an achievable target.  Let’s see.

I should also take this opportunity to apologise to those of you who had long delays before your books arrived.  Unbound needed confirmation of postal addresses before the books would be sent and I think some people might have missed their emails.  If, horror of horrors, any of you are still without the books you’ve paid for, then please contact support@unbound.co.ukwho have tended to be very quick in sorting issues out.

I’m going to be continuing to take the key messages of the book out to whoever will listen:

If you or your company might be interested in having this kind of discussion then please get in touch.  In the meantime, a massive thank you to each and every one of you for your ongoing support.