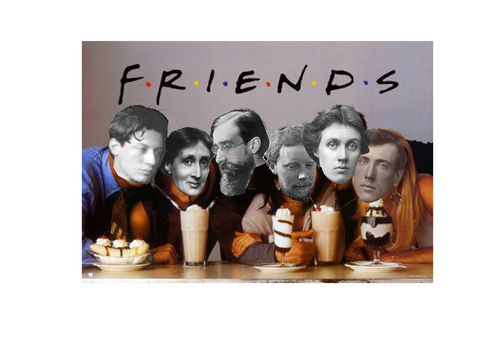 With apologies to Adrian Stephen, John Maynard Keynes, E.M. Forster and Leonard Woolf, who should all be in the picture too.

As many of you will know, I've recently finished up my chapter on Virginia Woolf, who is probably most easily associated in the popular imagination with her coterie of Bloomsbury intellectuals. This is for good reason. Not only were they a group of fairly promising individuals, their influence on each other's work and ways of thinking was enormous. Duncan Grant and Vanessa Bell went on to successful careers as painters, Lytton Strachey produced the iconoclastic 'Eminent Victorians', John Maynard Keynes became an important figure in economics, and then there are the novels of Forster and Virginia Woolf. But their relationships with each other were key to their development. This was certainly the case for Virginia Woolf, who enthused in her later writing about the liberating lifestyle and conversation that opened up her world from what she described as the dark, socially constricted interiors of the Stephen family home at Hyde Park Gate in Kensington. So likening them to the chirpy cohort from a modern sitcom is a bit cheeky, but it's not quite as far-fetched as it might seem.

One of the things that Virginia enjoyed about life in Bloomsbury was the enormous freedom they felt to talk about topics that would have been taboo at Hyde Park Gate. 'So there was now nothing one could not say, nothing that one could not do, at 46 Gordon Square,' she later wrote, and went on to describe being able to speak openly of 'buggers' (ie, homosexuals), for example. 'Thus many customs and beliefs were revised' (MB, 57). Lesbians ('Sapphists', as Woolf preferred to call them) become more of a topic when Vita Sackville-West entered the picture, though she was not so enamoured of the group, which she thought overly serious, dubbing it 'Gloomsbury'.

Virginia also wrote about the relish with which she and her sister, Vanessa, threw off the old Victorian style in their new digs: 'the red plush and black paint had been reversed; we had entered the Sargent-Furse era; white and green chintzes were everywhere; and instead of Morris wall-papers with their intricate patterns we decorated our walls with washes of plain distemper.' And the atmosphere was going to be charged with creativity rather than buttoned-up behaviour: 'we were going to paint; to write; to have coffee after dinner instead of tea at nine' (MB, 46). It doesn't sound terrifically wild, but for the Stephen sisters, whose lives had been ruled by the Victorian clock, it was somewhat akin to Chandler quitting his boring job or Rachel NOT getting married.

Sex, far from being a taboo subject, was deliberately talked about, discussed, theorized about and joked about. These conversations did not perhaps reflect the breadth of experience of the t.v. cast but were remarkable nonetheless for their honesty. Virginia Woolf describes one scene in particular, when she and her new brother-in-law, Clive Bell, had become antagonistic toward each other and it was creating some amount of tension:

'It was a spring evening. Vanessa and I were sitting in the drawing room .. At any moment Clive might come in and he and I would begin to argue ... Vanessa sat silently and did something with her scissors. ... Suddenly the door burst open and the long and sinister figure of Lytton Strachey stood in the threshold. He pointed his finger at a stain on Vanessa's white dress.

It may sound a bit juvenile, and not quite like Joey and his revolving bedroom door (though the men seemed to swap partners with some alacrity) but it illustrates the casual intimacy of the group that we might find surprising for this generation, but which they carried on through most of their lives. As for character correspondence, it seems the older half-brother George Duckworth (who threatened to move in with Vanessa, Thoby, Virginia and Adrian in their new abode but then suddenly got married--phew!), stands in for Barry, the dentist whom Rachel didn't marry as the series opened. When it comes to Monica and Chandler, either Vanessa and Clive or John M-K and Duncan Grant could be in the running for those roles. However since Grant had been Adrian's lover and later became Vanessa's the pairings get complicated in a way even those seemingly super-hip t.v. writers might have found tricky to get past the sponsors.

Above all, researching those unconventional Bloomsburies made me think about the importance, or not, of a nurturing group of like-minded creatives in an individual's achievement. I'm now writing on John Galsworthy, whose primary source of moral support was his wife, Ada, who required a large amount of attention herself. Theirs was a particularly close and guarded relationship. But Galsworthy also had important 'friends'. Early on he came to know the young Joseph Conrad, and there was H.G. Wells (whom he visited at his house in Sandgate, Kent, built by C.F.A. Voysey), and Thomas Hardy (who built Max Gate). In his fiction Galsworthy's protagonist builds a house to try to keep his wife from straying. Was the author influenced by the homes of his friends? Watch this space.