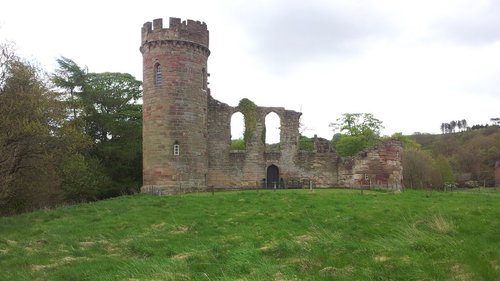 First of all, great thanks to Celia, Will, Jill, Vivienne, Joe, Stephen, Jean Bernard, Richard, Chris, Dee, Roslyn and ALL of you who are supporting the book. You can have a read of some of my  thoughts on Thomas Hardy and Max Gate, which the Hardy Society have very kindly posted on their website.

Though currently my thoughts have turned to Robinson Crusoe and the early novel, which I am discussing with my students at Goldsmiths. I am learning new things all the time, and finding more fascinating connections between the novels and the houses they inhabit. It may be that Robinson builds the first house in fiction but the first Gothic mansion in the history of the novel appears in Tom Jones, Henry Fielding's 1749 story of a lucky bastard (in the literal sense). Squire Allworthy's house is said to be in the 'Gothic stile' and was probably modeled on Fielding's own family home of Sharpham Park, with details from Hagley Park and Prior Park, which belonged to his supporters George Lyttleton and Ralph Allen, repectively (see Wesleyan edition, with notes by Fredson Bowers). The mention of the Gothic style is also a nod to Sanderson Miller, an architect and proponent of the Gothic revival. He designed a rotunda and 'ruined castle' for George Lyttleton at Hagley Park. Fielding had an eye for a good house, and a pen for lashing his enemies, which he did in his 'Vernoniad', which mocks Robert Walpole's governance, his house, Houghton Hall, and his art collection:

'a huge dark lantern hung up in his hall/and heaps of ill-got pictures hid the wall.'

I guess that's what you might call hitting him where he lives.

A brilliant post! I can't wait to read the book!