The Fun of A Cock and Bull Story 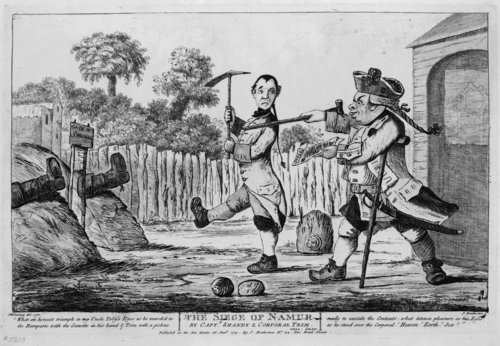 The more I write about Laurence Sterne and Tristram Shandy, the more I want to watch (again) the blissfully idiosyncratic film adaptation directed by Michael Winterbottom. Re-reading Shandy–the expostulations in the parlour, the pounding of poor Susannah's feet across the hall overhead, the ruminations on wit and judgment (focusing on the two knobs on the back of the chair), Dr Slop's ineptitude (his overly tied kit bag), the forceps and poor Tristram's nose, the sash window and poor Tristram's privates, the fortifications, Corporal Trim's reading of the sermon (The Abuses of Conscience, which Sterne had published a decade earlier), the amorous machinations of the Widow Wadman, etc. etc. – it seems an impossible task to reinterpret it. But that's the joy of the film, that it takes its cue from the folly of it all. Reading the book is like eating a multi-layer cake with wildly assorted fillings, but sticking the fork in at all angles, each of which brings a new treat (strawberries! cream! Yorkshire pudding!) only related by the fact of being tucked between the delicious folds. I'm rather taken with Peter Conrad's introduction to the text, in which he decides that 'to tidy up the form would be to deny randomness, and thus to tell a lie about life.' For a writer who struggled through penury and the obligations of preferment, ecclesiastical squabbles and marriage strife, illness and so very much death, particularly of infants, randomness must have seemed the rule and to rail against it folly itself. So instead he celebrated and put in the book everything 'which I find Laugh-at-able in my way.' How glad we are for that.

Thanks to all my new subscribers, Jude, Edith, Keeley, Steve (again), Claudia, Anonymous (you know who you are), Richard (now I know who you are), Julia, E. O. (keep writing, writing!), Anonymous 2 (perhaps you've met Anonymous at a previous function?), Keith, Michelle... for making this delving into digressions possible.