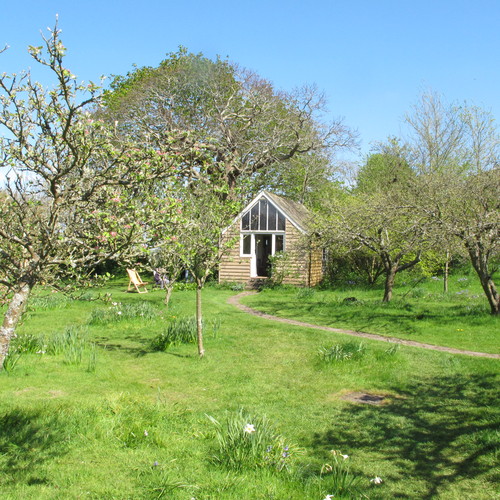 Of course, one of the great perks of this project is travelling to the many fascinating dwellings that I'm looking to learn more about. Over the weekend I made a trip with my dear friend (and volunteer research companion) Guilland Sutherland to Monks House in Sussex. My interest was to compare Monks House with Talland House, the Stephen family holiday home in St Ives, of which I wrote here. 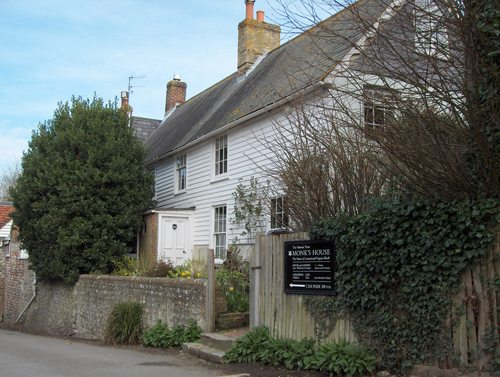 As an adult, Virginia had two previous summer houses in this area of Sussex (one of which she dubbed 'Little Talland House') before she and Leonard bought the farmhouse in Rodmell called Monks House. It's not clear how the name came about, but what is certainly discernible from her letters and diaries is how much she loved it here, even when the house was not in a very fit condition for habitation: 'That will be our address for ever and ever; Indeed I've already marked out our graves in the yard which joins the meadow.' The house had 'a great many drawbacks', she pointed out to a friend. These included a lack of indoor plumbing, a surfeit of outdoor water coming in and flooding, mice, broken window latches. Still, she pronounced it 'charming' and while she and Leonard undertook to move their main residence from Hogarth House to Tavistock Square in 1924, then to Mecklenburgh Square, in 1939, they never let go of Monks House. It was in the nearby River Ouse that Virginia Woolf drowned herself in 1941, and Leonard buried her ashes in the garden at Monks House. 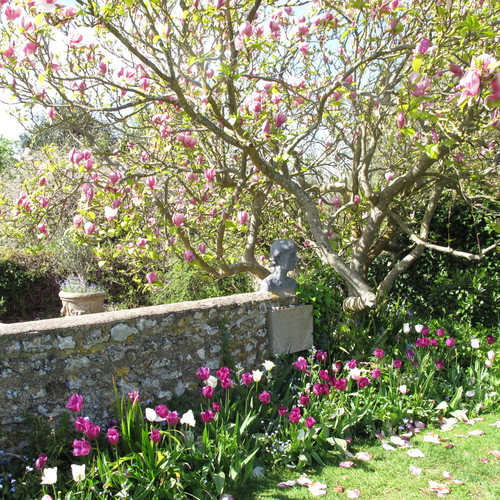 A  late-April day that began with drizzle and erupted into clear sun was a felicitous time to visit the house and the garden, at the moment quite literally bursting with bud and flower: tulips, daffodils, hellebores, all vivid with spring colour, magnolia, apple and pear in a flurry of blossom. Leonard and Virginia enjoyed making the garden together, and it embodies that joyful spirit she could project in her writing, which often gets blanketed in her biography by the tragedy of family deaths and her own illness. But the moments of elation are there throughout her diary, many of them spent here. 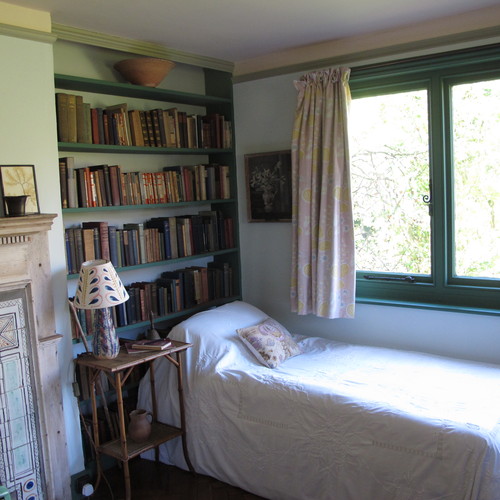 The house was owned by the University of Sussex for some time after Leornard's death. It came to the National Trust in 1980 and still has many of the furnishings and objects that belonged to Leornard and Virgnia, including the sitting room table and chairs bearing Virginia's initials and decorated by Duncan Grant and Vanessa Bell. Virginia's bedroom (above), which was added in 1929, contains a fire surround with tiles designed by Vanessa and inscribed 'VW from VB 1930'. The central panel shows a boat sailing across the bay in front of a lighthouse, in honour of Virginia's 1927 novel. In the corner of the room is a bookcase, probably purpose-built for Virginia's collection of Shakespeare's plays, which bear covers designed by her. 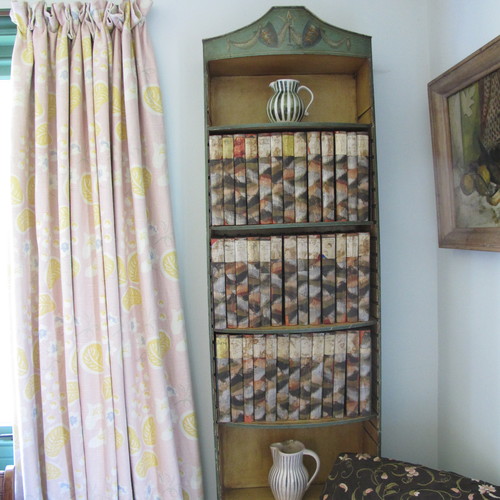 Monks House is a terrifically satisfying experience, as writer's houses go, not only because there is such a tangible presence, with all of the personal items and artworks by Vanessa and others, but because it feels like a real home, with the comfortable imperfections we expect in the house of someone who is more interested in the written word than in matching the china. Virginia and Leonard were eclectic collectors, so this makes the house feel like a glimpse into their world, where visitors such as Lytton Strachey, T.S. Eliot, E. M. Forster and Ottoline Morrell might stop in, though some, like Vita Sackville-West, were less enthusiastic about the house's rustic charms than others. Despite the many improvements they made to the house (the proceeds from Mrs Dalloway famously paid for an indoor bathroom), it was never a paen to luxury. It is said that while it was owned by the University of Sussex (1972-1980) the American writer Saul Bellow came to stay but grumbled about the cold. Today there is a suitably insulated studio available to rent via the National Trust.  Otherwise, it's the perfect time to see the 'sunny house' and garden that Virginia and Leonard loved so dearly. For details visit the website.

A moment here to thank all you new subscribers to the book: Margit, Margaret, Jason, Helen, Joseph, the tea ladies (Shannon and Tara), Yana, my gratitude to you, every one. 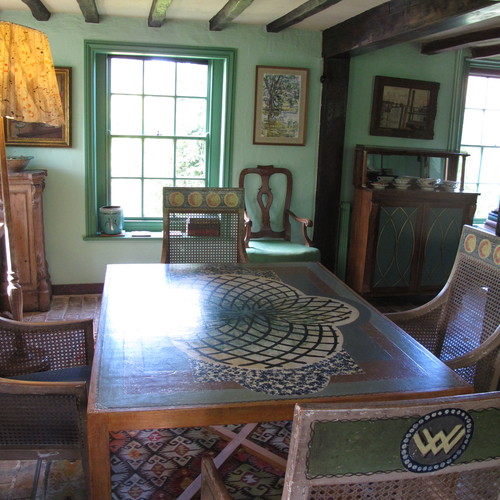 The sitting room at Monks House with table and chairs designed by Duncan Grant and Vanessa Bell for Virginia Woolf, notice the initials on chair back. Virginia chose the minty green colour for the walls. 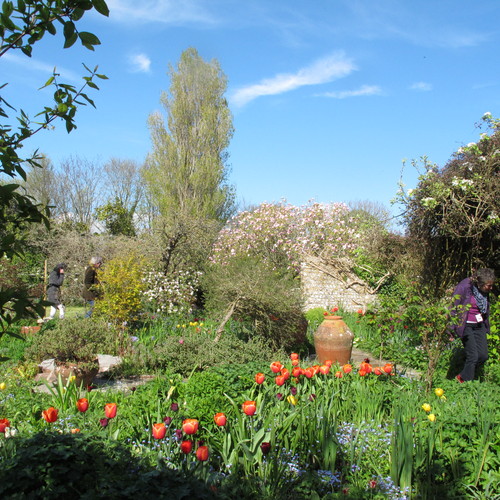 Virginia Woolf declared that her husband was 'garden proud'.

Now this is a house I remember clearly. Lovely day and weird to be in a house lived in by Virginia. I am particularly interested in houses in fiction as I use houses to create atmmosphere in the long fiction I write. Not that I have had much success so far and the only house in print is a villa in Italy in which I am sitting as I write this. I have sigend up for aa Arvon Course later this year on A Sense of Place. I am enjoying crowd-funding this project and following the messages from the shed. Thank you.
Jane Hayward who blogs at evenmorewords.wordpress.com

Thanks for reading and commenting, Jane. The villa in Italy certainly sounds nice. Enjoy the Arvon course. I did one many years ago but I remember it as a really fun and inspiring experience.