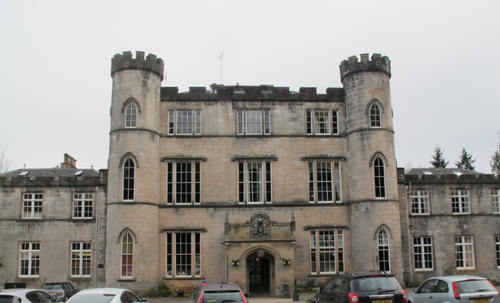 Doing the last bits of research for my chapter on Walter Scott, looking around his haunts in the Borders. After stop at Melville Castle, former home of Scott's patron the Duke of Melville, and now a hotel, we paid a rewarding visit to   Traquair House in Peebleshire, the 'oldest continually inhabited house in Scotland'. 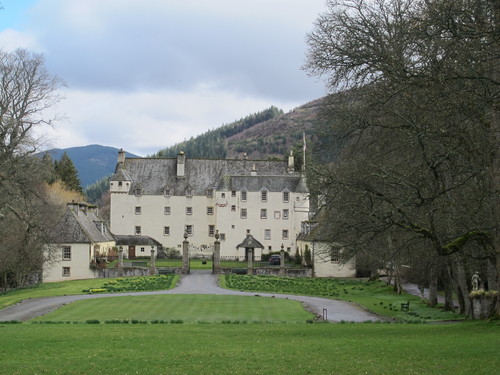 There was a building here at least from 1107, when Alexander I of Scotland signed a royal charter at Traquair. The First Laird of Traquair was established in 1491. By the time Scott was living nearby he would have heard about Charles, the Fifth Earl of Traquair, who installed the 'Bear Gates' at the entry to the tree-lined avenue leading from the main road to the front of the house in 1738. 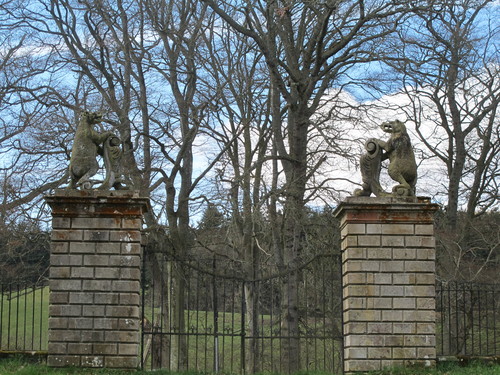 The 'Bear Gates' at Traquair.

In his first novel, Waverley, Scott described the Baron Bradwardine's beloved home Tully-Veolan as having gates, fountain and walls decorated with heraldic 'bears rampant', ie 'standing', as the ancient symbol of a 'noble lineage'. As a Catholic and a supporter of Prince Charles Edward Stuart (Bonnie Prince Charlie), the Fifth Earl had the gates 'firmly locked' in 1754, not to be opened again until 'a Stuart King was crooned in Lunnon'. In the novel, the Baron Bradwardine suffers the loss of Tully-Veolan because of his Jacobite tendencies. But that's after English troops billetted there have hacked down its ancient trees, burnt out its bartizans, and other 'accessaries [sic] of ancient distinction ... were treated with peculiar contumely'. 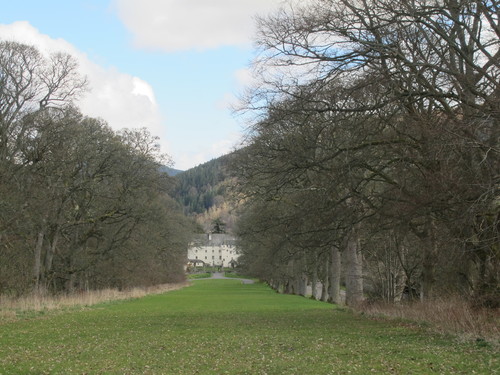 Fortunately, Traquair was never treated with such 'contumely', and still stands, a very handsome and wonderfully well-kept fortified manor house, home to the 21st Lady of Traquair, Catherine Constable Maxwell Stuart, her husband and three children. The main areas of the house are open to the public and make a fascinating visit. When Edward Waverley says of Tully-Veolan that the 'solitude and repose of the whole scene seemed almost romantic' he could certainly have been speaking of Traquair, with its large courtyard, well pond, that long avenue and walled garden. There is another feature, of which not many houses can boast: a still viable secret stair leading from the third floor to a garden escape. Like the upper room at Osbaldistone Hall in Scott's later novel Rob Roy, the 'Priest's Room' at Traquair sits on the third floor next to the library and can be exited unobserved through a corner stair once hidden behind a book-case. Visitors are welcome to descend via this route, though not in dark by candle-light, as we imagine Scott's mysterious Father Vaughn taking leave of the lovely Diana Vernon. Traquair now hosts festivals and brews its own 'Bear Ale' in the eighteenth-century brew house, one of the oldest working breweries in Britain. But you'll still find the Bear Gates closed and locked. 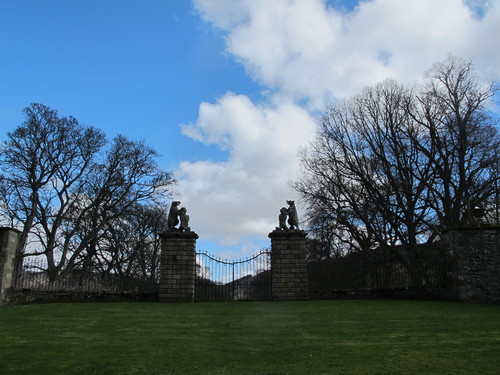