Last chapter finished, the rise of the tower block

It was a great thing to hand over the last chapters, and I'm grateful for all of you who have been sticking with the project, especially you early subscribers who may have thought it would never happen. Though there is still a lot to do: editing, chasing down illustrations, going through my long list of details and references to check. It's now in the editing stage and I must promise myself to refrain from fiddling much more. 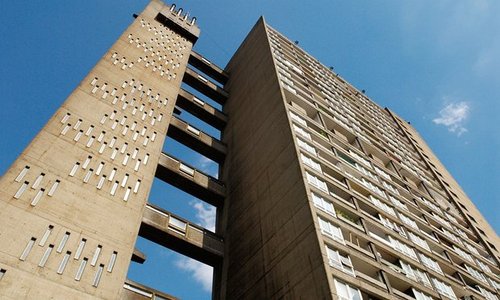 As much as I enjoyed delving into the historic architecture and trends of the Regency and Victorian periods, and bathing in E. M. Forster's lyrical paean to the country cottage, I must say that writing about the modern era, particularly the British tower block, was a fascinating exercise. Of course everyone knows about the chronic failures of the adaptations of Le Corbusier's 'machines for living' but the vision behind them was laudible in many ways: offer people new, modern housing with the latest conveniences, use vertical density to leave land available for green space. Ërno Goldfinger and his ilk were demonized after the collapse of the Ronan Point tower block in 1968, and Goldfinger's bad rap was probably aided by Ian Fleming awarding one of his cartoonish villains the same name. (Image of Trellick Tower, above) 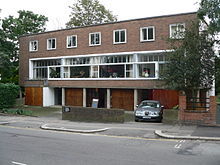 Some unlikely connections emerged here. Long before he built the Trellick Tower, Goldfinger designed a modernist-style house for himself in leafy Hampstead Heath (see image of Willow Road, above), now owned by the National Trust. The build required the knocking down of some Victorian houses, which aroused the ire of the local conservation group. Legend has it that Fleming was one of those who objected, but this is not easy to confirm. However Fleming did have a close friend who was related by marriage to the architect Goldfinger and who was not the architect's biggest fan. It was this connection (rather than the building of the Hampstead house) that inspired Fleming to use the moniker for Bond's nemisis and title of the novel. Goldfinger, feeling the stab was intentional, tried to stop publication, which then DID get under Fleming's skin. 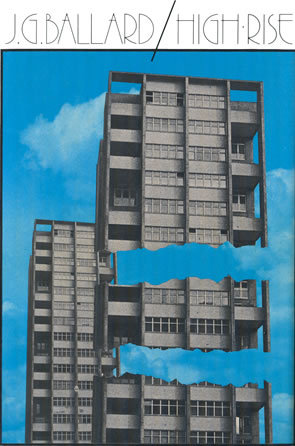 (Above: cover of first edition of High-Rise) The far more obvious fictional critique of the tower block came from J. G. Ballard's novel, High-Rise, which many interpreted as a direct attack on these architectural experiments. But Ballard himself resisted comparisons with the council-run buildings. Instead, he insisted that he was drawing on experience of 'luxury' high-rises which were largely populated by 'middle-class professionals'. The high-rise of the novel still suffers from the mechanical failures that plagued the Balfron Tower and Trellick, namely not enough lifts and those few breaking down. But Ballard seemed intent on pinning the failure on the building design, rather than the class of people. In Ballard's interpretation the building that was designed 'for man's absence' could send even educated professionals into open warfare; so you shouldn't blame the problems of the tower blocks on the fact that they were inhabited by council tenants. This is one of the areas in which the most recent film of the book got it so wrong. Although Ballard's book does descend into an orgy of violence (as the film depicts so lovingly), there is a social message there about lack of community and trust. I also believe that the violence of the book was informed by Ballard's experience of life in Shanghai, and in the Japanese internment camp, where physical brutality was an everyday occurence. Ballard wrote specifically about his life there in Empire of the Sun, but the shere banality of violence is clearly illustrated in High-Rise. 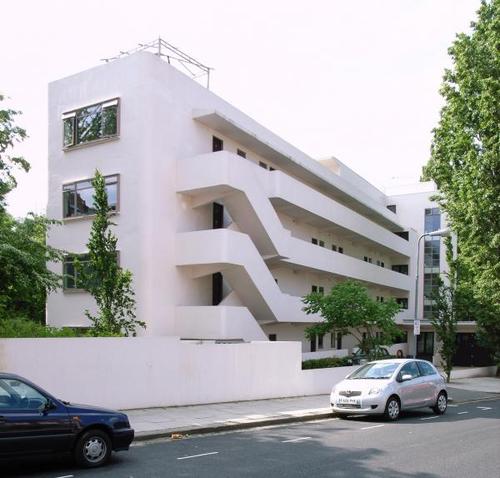 Another interesting piece of the modernist puzzle is to do with Agatha Christie and her modernist-inspired houses. Christie's phenomenal output and variety of settings, and her lack of architectural specificity defy much close correspondence between the ficitonal houses and the reality. Murders take place in grand old houses, townhouses, in apartment buildings, on trains, on archaeological digs, but these are all places the author knew first hand. My interest in her modernist abodes has been encouraged, of course, by some of the wonderful houses used for the television series. But it does give us some satisfaction to know that Christie lived for awhile at Lawn Road (above), in Hampstead. The iconic modern apartment block was designed by Wells Coates in 1934 (five years before Goldfinger built the houses at Willow Road). It enjoyed a thorough refurbishment in 2003, and is now called the Isokon Building, with flats owned privately and a public gallery on the ground floor.

Though the writing is pretty much finished, I'm still looking to raise subscriptions to allow for colour images. If know anyone who might want to subscribe, please send along the link!

And thanks very much indeed for your support.