'in a bye corner of the kingdom' 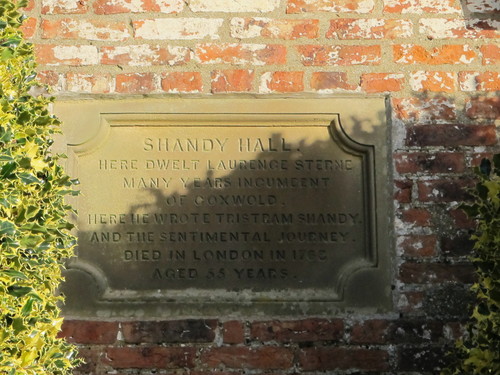 A visit to Laurence Sterne's Shandy Hall, in Yorkshire, leads one predictably off the linear track. I'm not sure what I expected, but I suppose it wasn't to be quite as overwhelmed with the number and range of activities and creative tangents the house (and the Trust) have prompted and promoted in recent years. But then Sterne was never retrograde in his writing or his visions. As we know he published by subscriptions (cf Unbound), I don't think he would have had any real trouble promoting himself on social media, @YoricksHobbyHorse, perhaps? The house is no obsessively preserved monument to Sterne in the eighteenth century. Rather, as curator Patrick Wildgust has overseen it since 2004, Shandy Hall is a living, growing tribute to the wonderfully promiscuous literary excursions of its famous resident, who had enough imagination and wit to keep us laughing and wondering two and a half centuries on. 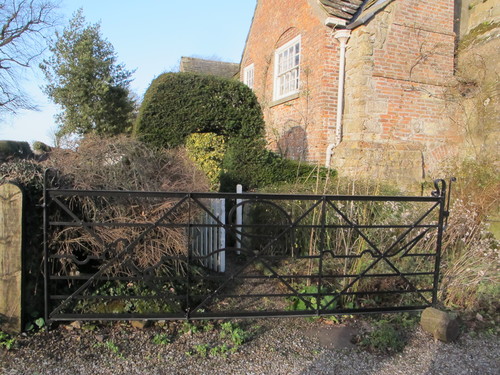 Above: the metal gate depicting the plot-lines drawn by Sterne for Vol. 6

Patrick is interested in highlighting Sterne's influence on subsequent literature and art, a consideration that presents paths in many directions and dimensions I found, much to my delight. In approaching people to participate in contemporary Sterne-inspired events, he says he 'wanted to find out who would acknowledge a debt to Sterne.' It turns out there were/are many. Programs and publications include works by conceptual artists, film-makers, musicians, actors, cartoonists, lepidopterists, sculptors – surely there must have been a neuro-scientist in there somewhere – graphic designers, as well as students, scholars, all-out Sterne enthusiasts – I imagine at least a parson or two – and writers. Frankly, I wouldn't have been surprised (or sorry) to find acrobats tumbling through the halls in some formation derived from Sterne's graphics depicting plot lines. 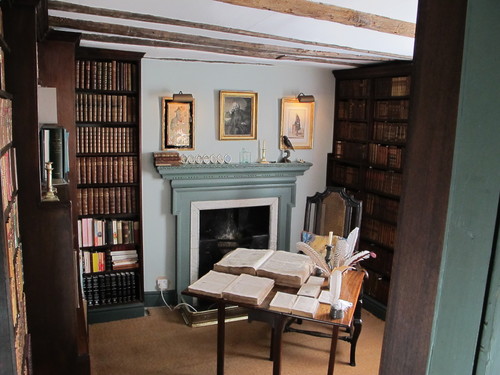 Still the house has all the atmopshere of the 18th-century writer's home that a visitor could want. And it is full of items that help to identify its most celebrated and tendentious tenant, such as a bottle for 'Daffy's elixir', mentioned by Sterne as a favourite, which the intrepid curator found on eBay, and which sits on the mantelpiece in Sterne's study. We picture the author there, as he described himself in the heat of summer, 'Here I am sitting in a purple jerkin and yellow pair of slippers without either wig or cap on.'  Others might have searched out a period jerkin and wig to hang ostentatiously on the back of the chair. But here are quills and books, a desk inviting us to conjure the parson as he wrote seven of the nine volumes of The Life and Opinions of Tristram Shandy and the two volumes of A Sentimental Journey, not to mention sermons and letters, including those to Eliza. More poignant in some ways is the little upstairs room Sterne intended for the young love of his last years, the elusive Eliza. In A Cock and Bull Story the 2005 film based on the novel and starring Steve Coogan and Rob Brydon, Patrick Wildgust was played by Stephen Fry, I suppose our present day laureate of intellect and wit. Fry is known to have millions of Twitter followers. I suspect if Sterne were alive today he would easily draw legions, with his flair for the apposite and unorthodox. Though, he would as likely tweet patterns, puzzles, the utterances of a caged starling....