Hello, 2015! and 18th-century publication by subscription 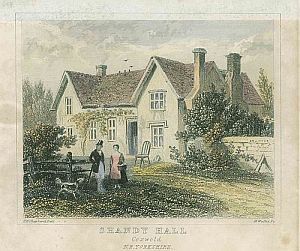 I hope you all had a wondrous, relaxing holiday and are ready to embrace the New Year. I'm beginning my House of Fiction New Year with a visit to Shandy Hall in a couple of weeks time. I'm really looking forward to seeing the house where Sterne went to live after the success of the first two volumes of Tristram Shandy. (Sadly, the vicarage where he lived previously at Sutton-on-the-Forest, was destroyed by fire in 1765).  'Shandy Hall', as it was dubbed after he went to live in it, was the cottage that was given to Sterne when he became vicar at Coxwold in 1760. The house was a late-medieval construction, to which Sterne added his own idiosyncratic additions. I'll update you on those after my return on 16 Janurary.

Studying Sterne's own publishing trials has been enlightening and somewhat reassuring. Unable to secure a London publisher for the first two volumes of Tristram, Sterne was forced to publish first in York, and only acquired London backing once the book had some well-placed (and somewhat engineered) endorsements. After the popularity of the first volumes was established, Sterne negotiated with Robert and James Dodsley in London, not only for the publication of further volumes of the novel but of two volumes of his sermons, which had achieved a reputation of their own. Like the Unbound model, the sermons were published by subscription and, according to biographer Ian Campbell Ross, boasted 'an exceptionally prestigious subscription list', including 'more than 650 names'. Among numerous dukes and duchesses, people such as the poet laureate, William Whitehead, the famed actor David Garrick, the bluestocking Elizabeth Montagu, and the artists Joshua Reynolds and William Hogarth put their names (and money) down in support. So here's to you, Unbounders, in the spirit of those 18th-century 'legislators of taste'.