Fully funded--we're on our way! 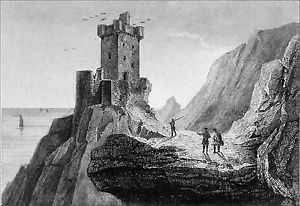 Above: engraving of 'Wolf's Crag' castle, from The Bride of Lammermoor

Thanks to everyone, each one of you who has supported the book by sponsoring and those of you who have come to events, put the book on your Facebook pages, or asked (or told!) friends to support it. It now has the funding needed to do the first printing, which I am very excited about and grateful for. (I'm still hoping for more sponsors, however, since it might mean I could print the illustrations in colour, which would be terrific. Though they will still be great in black and white.)

And, I'm still writing. Just the last few chapters to go now. I've been handing out chapters to friends and friendly editors to read and comment on along the way, which has been extremely helpful. Their comments and suggestions have really helped to give better shape to the book.  I'm working on (re-working) my chapter on Walter Scott at the moment. Scott was one of the most passionate house enthusiasts and, very helpfully for me, he often puts footnotes in his books that mention which existing houses he is referencing. There are a number of important houses in the books: Osbaldistone Hall, Ravenswood, Wolf's Crag, Ellangowan, Waverley-Honour and the great Bear-gated Tully Veolan. Even that wild Highland rebel of Waverley, Fergus Mac-Ivor Vich Ian Vohr, has the picturesque castle of Glennaquoich to retreat to. So, having just finished writing about Charlotte Brontë, who was reluctant to tarry too long from Haworth Parsonage, it's a really different atmosphere following Scott on his romantic ramblings through the highlands and lowlands of Scotland. I visited Abbotsford last September and will be going back to Scott country at Easter.

Also, (and I'll have to write a proper thank you), but I have to say, I've met so many interesting and inspiring people who own or look after the houses I'm writing about. Some of whom have been so generous with their time and information. Each house has a story of its own, which I don't have the pages to tell in full. I've been discovering as I go along that the relationship between an author and a house has a few different dimenstions: the house itself, the author's relationship with it and then how the author uses it in their story. For example, Restoration House in Rochester had existed for hundreds of years before Charles Dickens saw it. His response to the already-ancient and probably somewhat dilapidated house was to imagine Miss Havisham living inside it, so that in his book it came to represent a kind of moral decay.  In a funny twist of fate, in the 1970s it was bought by the comedian and ventriloquist Rod Hull, who made much of the associations with Dickens and even decked out the large upper hall in Satis-House style wedding banquet. The house has recently been beautifully restored, its Dickensian associations only a part of its storied history.

So I best keep writing. Thank you again for the support. I'm really looking forward to delivering the book!