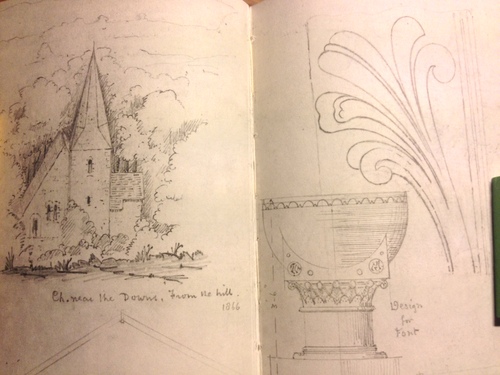 [Above: sketch of a village church, left, and a baptismal font]

Okay, so finishing the last couple of chapters and putting together illustrations for The House of Fiction now. I just had to share this little fascinating gem of a book. It's Thomas Hardy's Architectural Notebook with sketches mainly from his time working for John Hicks in Dorset, Arthur Blomfield in London (in whose office E.M. Forster's father also went to work a few years after Hardy's departure) and G. R. Crickmay, also in Dorset and the West Country, in the 1860s-70s. Hardy began his architectural career doing Gothic restoration work on churches. Some of these projects  he later came to regret, as so many churches had their original historic architectural elements destroyed in so-called 'restoration work' that was embraced with such fervour by the late Victorians. 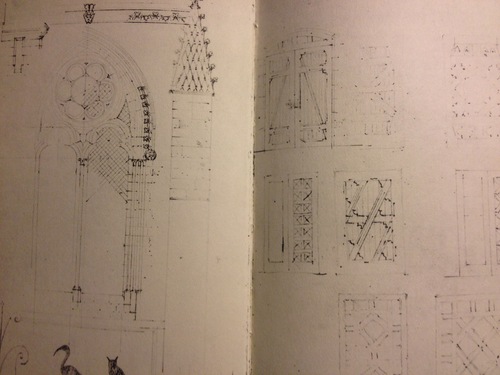 The orignial of Hardy's notebook, a diminutive tome measureing 4 1/2 x 7 1/4 inches, is in the F. E. Hardy Memorial Collection in the Dorset County Museum. The facsimile copy I was so lucky/pleased to find on the shelves of the Goldsmiths College Library was published in 1966 by George S Macmanus Publishing Company, Philadelphia, Pennsylvania. When I've finished the House of Fiction, I am seriously considering a campaign for a reprint of this book. Hardy was certainly a skilled draughtsman before he began publishing fiction. The small sketches of everything from Gothic tracery and scroll-work to the detail where a screw is lodged in a stone wall using a deal block--the threads of the screw are discernible!--are beautiful in their delicacy. 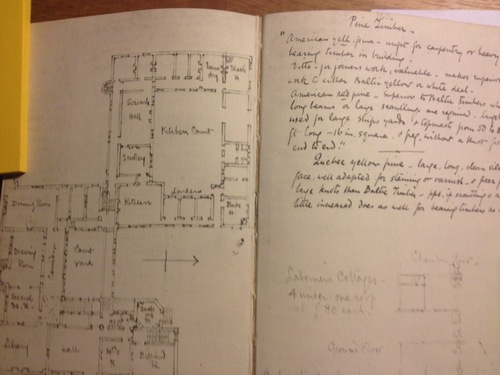 Throughout the Notebook are, well, notes: notes about the use of pine (which was just coming into popular use), drainage, how to sink a well, how to prime ironwork from the foundry, how to keep rats at bay; others on  'Materials for Marble Inlay' and 'Harmonious Contrasts in Col(oured) Decoration'. There is a drawing depicting the 'System of Inlay' for a Lily pattern on oak, with each element of the flower picked out in colour and material. There are pages that detail of improvments to Slape Manor in Dorset, a project Hardy worked on with Crickmay in 1871-2. These are mostly to do with a new coach house. Years later, Tess would observe of the stables at the d'Urberville mansion (which Hardy called 'The Slopes'), that they were 'fitted with every late appliance' and were 'as dignified as chapels of ease.'

There are a couple of designs for large country houses, others of smaller houses, a design for a dairy (probably useful later for Talbothays in Tess) and some for labourers' cottages. The latter was a subject he felt strongly about. One of Hardy's last published pieces was an essay arguing for the preservation of cottages built in the old way, using 'mud-wall and thatch', a process that 'had doubtless gone on since the days of Israel in Egypt and earlier'. Hardy encourages landlords not to tear these cottages down, nor to replace them with bricks, 'since, apart from the warmth and dryness, they have almost always great beauty and charm.'

Thanks for posting about this book. It looks like a treasure!