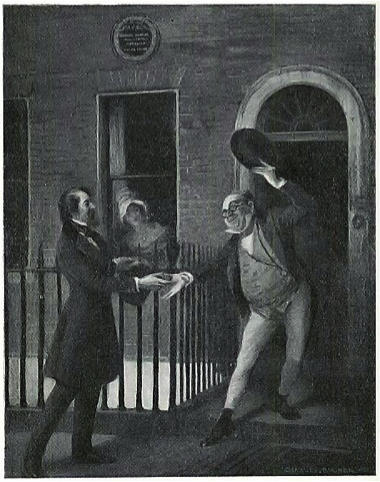 The word refers to Aristotle but could as well be applied to 'Boz', who found walking necessary for his fitness but all in large measure for his sanity. He often walked 12 miles in a day–usually through, around, about London–and once famously walked from his home at Tavistock House in Bloomsbury to his newly purchased retreat, Gad's Hill Place, near Gravesend in Kent, a distance of some 30 miles. But Dickens was as restive in his living as in his creative/walking habits. Born in Portsmouth in 1812, he spent the 'happiest' years of his boyhood in Chatham, Kent, where he roamed Rochester (encountering the mansion that would inspire Miss Havisham's Satis House), explored the Medway (which would inform Pip's escape with Magwitch) and was shown the house that (I feel) most signified his life's ambition and achievement. The illustration above shows Dickens on the steps of another house, on Doughty Street, London, (now the Charles Dickens Museum). The author is shown meeting Mr Pickwick, his character from the eponymously named papers, the income from which enabled him to pay for this, the first proper home he provided for his young, and quickly growing, family. 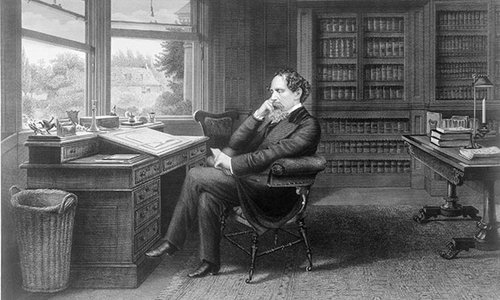 [above: Dickens at his desk at Gad's Hill Place]

Dickens often told the story of his first encounter with Gad's Hill Place, which is situated between Higham and Gravesend. He recalled how 'My father used to bring me to look at it, and used to say that if I ever grew up to be a clever man, perhaps I might own that house.' He also loved to remind people that this was the place where 'Falstaff engaged in the robbery', referring to the first part of Shakespeare's Henry IV when the big bumbling rogue and his friends rob some travelers but are then robbed by Harry and friends in disguise. On being told many years later that the house was up for sale, Dickens jumped at the chance to get it. By this time an author of international acclaim and wealth far exceeding that of his boyish fantasies, he purchased Gad's Hill Place initially as a summer retreat, but then made it his permanent home, after separating decisively (though not legally) from his wife Catherine in the late 1850s.

Dickens was a modern author in many ways. Firstly, he followed close on the heels of Walter Scott, who is considered the first international literary star, only to exceed him in popularity. Also, like most most citizens of the modern, urbanized era, he moved house: as his family and success increased, so did the size of his abode. At Doughty street, he paid £80/year for three floors plus a small basement and attic, and further children, and Oliver Twist and Nicholas Nickleby were born. So when the lease ran out in 1839, he moved with his family to a much more spacious detached Regency house at no. 1 Devonshire Terrace near Regent’s Park, for which he paid £800 for a twelve-year lease plus rent of £160 per year. In 1851, he took the lease of Tavistock House, where Catherine gave birth to the couple's tenth child in 1852. It cost him £1,500 for a fifty-year lease. He meant to live out his life there but then, several years later, he fell in love with the woman who changed the course of many of his intentions. He was living permanently at Gad's Hill Place (now a school, but open at weekends for visits by appointment) by 1860. 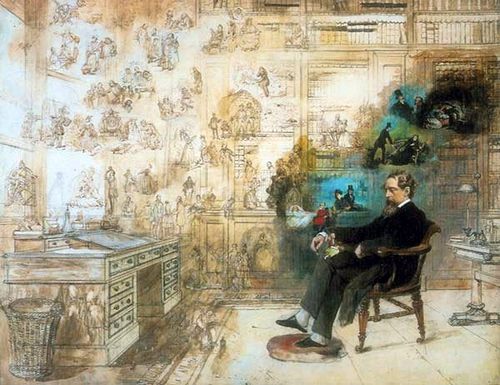 [above: 'Dickens' Dream', the well-known work by Robert William Buss]

This may not seem terribly transient by today's standards, but in between these moves Dickens and his family weren't in one place for very long. From 1839 he spent weeks or months at a time alone or with his family installed at a house in Broadstairs. Here the Bleak House hotel (called 'Fort House' when Dickens used it) was enlarged and renamed in the early 20th century, but maintains the room where he wrote. It's a bit tired, but worth a look. Interestingly, the desk and chair sit on a raised dais with a view over the garden and directly out to the sea. Also in Broadstairs is the Dickens House Museum, situated in a lovely little house facing the seafront. The house once belonged to a Miss Mary Person Strong, who is said to be the model for David Copperfield's wonderfully eccentric aunt Betsy Trotwood. Dickens's son Charley recalled that Miss Pearson Strong ‘fed him tea and cakes’ and at times interrupted their visit to chase the donkeys from her front garden. Today, the front parlour is preserved as it was in Dickens’s time, and other rooms contain a varied and interesting collection of Dickensiana.

Dickens also took his family on several extended trips to the Continent (Dickens became a great fan of the French), and he made two long sojourns to the United States. While 'at home' in London, he often left his family and spent weekdays and nights in his rooms at the offices of Household Words (later All the Year Round) near Covent Garden. Consider this and you begin to get a picture of a man in movement. Add to this his regular visits in later years to wherever his paramour Nelly Ternan was living (France, Slough, Peckham), which he fit in around his life at Gad's Hill and, by this time, his packed schedule of speaking engagements, and you get a picture of a man in a frenzy of his own making. And yet there must have been long, quiet, settled moments of creation. Whether he conceived all of those characters and situations on his walks, on his train journeys or ocean voyages, at some point he sat down and put pen to paper. Like many of his readers, I like to imagine him at one of his desks, which he usually set in the window. One of his daughters said he always had a mirror nearby, as he might jump up from his seat and practice a character's speech or look, and then rush to write it down. But I like to think of him as he sat down again, and those myriad creatures walked, or limped, slouched or slid, skipped or glided from the reaches of his well-aired, windblown imagination onto the page.