The Hidden Matrix: Myth and the Human Mind

One of our foremost interpreters of myth argues that it is essential to all culture: the factory reset of human consciousness

A controversial book by psychologist Jordan B. Peterson, Maps of Meaning: The Architecture of Belief, has brought back into vogue the ideas about mythology as embodying universal mental archetypes first put forward by Carl Jung, and promulgated by Joseph Campbell. Now, I don’t want to get into a whole review of Maps of Meaning, except to say that I fundamentally disagree with this approach, and any attempt to meld superficially similar myths from different cultures into what Campbell called a “monomyth”.
If myths are maps of meaning, they are as particular and localised as a real map. It is because myths are attached to a particular place, a particular people, even a particular individual, that they gain their undoubted universal force. If you reduce the myths of different cultures to a “monomyth”, you empty them of meaning. Such a method is simplistic and reductive, and by ignoring the way myth is calibrated to culture, risks misinterpretation.
Peterson—who rather oddly doesn’t seem to have noticed any writers on myth since Campbell and Eliade—devotes 20 pages to an account of the Babylonian creation myth the Enuma elish. His approach is to use this text as a way to reveal the deep forces of the human psyche. He says, for instance, that the generation of gods born from the primal couple Tiamat and Apsu “should therefore be regarded as embodiments of the archaic transpersonal intrapsychic phenomena that give rise to human motivation, as well as those aspects of the objective world that activate those intrapsychic systems.”
Broad assertions like this seem to me almost meaningless. In essence, I think he is looking at the Enuma elish through the wrong end of the telescope, and the best way to understand its relevance to us today is to ask the simple question, What did it mean to the Babylonians?
So here is my attempt to answer that question. 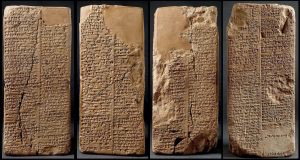 After his acclamation as king, Marduk exercises judgment over the fate of Qingu, Tiamat’s lover and war leader. Qingu is executed, and from his blood, at Marduk’s instigation, Ea creates mankind to serve the gods.
Nevertheless it is the gods themselves who build Babylon from mud bricks, and raise the Esagila temple complex to be Marduk’s home, establishing inside it the temples of Anu, Ellil (Sumerian Enlil) and Ea, and shrines for all the gods. The ziggurat of the Esagila is identified with the Tower of Babel of Hebrew myth.
Then the gods sing a hymn of praise to Marduk, praising his fifty great names, of which one is Bel, meaning Lord; it is the same root word as Ugaritic Baal.
The inner power of a myth such this Babylonian Epic of Creation was so potent that it could even be appropriated by a conqueror and absorbed into the worship of another god. This fate, in which one god is as it were swallowed whole by another, happened to Marduk in 691 BCE, when Babylon was conquered by King Sennacherib of Assyria. From then on, the hero of the Epic of Creation was the Assyrian god Assur.
The Enuma elish, so intimately entwined with the ritual of the Akitu, was for the Babylonians less a primal psychodrama than it was an assertion of continued power, status, and stability. The combination of myth and ritual explained Babylon to itself.

First edition hardback, the e-book and your name in the back of the book
Choose this reward
£10
64 pledges