A dark, chilling thriller about three of the women accused during the 1612 Pendle Witch Trials

Well, we’re over the hump and surely it’s all downhill from here? Thanks to your support, The Hellion is now 50% funded and well on track to being published. A huge £2,779 has been raised by 184 of you, and that is just incredible! Some more stats for you - I have spent 210 hours on social media spreading the word, and walked 73 miles leafleting for my novel.

But, there’s still a whole 50% to go and so we’re not on the home straight yet. If you’re willing, it would be wonderful if you could share the flyer below with anyone who might be interested- friends, family, neighbours, colleagues. You can also share it on social media if you have it! 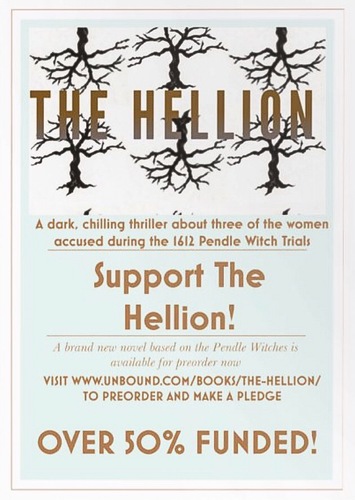 And to say thank you again, I also wanted to share a tiny little snippet of what you’ll be reading (hopefully) when The Hellion is published!

Of course, she was just a child, but she didn’t talk to them as another person might talk. Instead, she would occasionally drop a phrase or a monologue into a room and leave everyone feeling deeply uncomfortable. For example, there had been the time when Old Demdike had been treating them to a story about her life in Whalley when she was a child, and Jennet began laughing hysterically when Old Demdike was describing her mother. When Elizabeth had asked why she was laughing, Jennet had just replied, ‘split like a plum!’

They weren’t words Old Demdike had spoken, and Elizabeth had looked confused, but Old Demdike’s face had turned grey and she began to tremble. She refused to tell stories about her childhood after that.

There were other things too. The way she hummed; a low humming which you didn’t notice at first, until it built and you thought you were going mad. Then she would stop suddenly, and you would realise what she had been doing. A childish game, perhaps, but it always seemed like there was more to it than that.