My timetable this year has involved teaching poetry - epic poetry. First, the Iliad; then the Aeneid. I was pleased to be able to 'forget' the war  for a while (as in the Great War, World War One, whose literary and historical battlefields I've been immersed in for the last five years while researching this book). But I was a little daunted by the length of both classical epics, as well as by their archaic literary mannerisms.

No more. Because not only have I discovered unexpected links between a 3000 year old Greek poem about the siege of Troy and my own recent research into World War One, I've also learned to appreciate the scope of the Iliad. Although it's old and packed with mythological detail the core of the epic is thought to be a folk memory of a real event. That's truly awesome!

What's also awesome is what I'd thought to be the least interesting passages. The famous 'Catalogue of Ships' in Book 2 turns out to be so much more than a 'name-check' of the many and varied Greek forces who have joined with Agamemnon on the famous expedition to lay waste to Troy (in revenge for the Trojans running off with Agamemnon's sister-in-law, the famous face-that-launched-a-thousand-ships, Helen). These are the villages from which the 'cannon fodder' of the Greek forces come from. And Homer's catalogue of ships is his homage to their memory. It's what the poem is for.

He does is personally, too. The first Greek to die (he's also the first to land in Troy) is Protesilaus. He's a name. A death. But he's also the man who will 'never return now to his half-built house' and whose wife 'tears her cheeks with grief'. Later in the poem Axylos is killed by Diomedes. And Homer tells us he, 'had a house by the road and was hospitable to all men... But none of them faced Diomedes for him and saved him from a miserable death.'

Yes, the Iliad is a war poem - probably the most famous war poem ever. But to quote another war poet its subject is not just war but the 'pity of war'. And the names and lists are Homer's own millenia old versions of our own memorials to the 'Glorious Dead'. 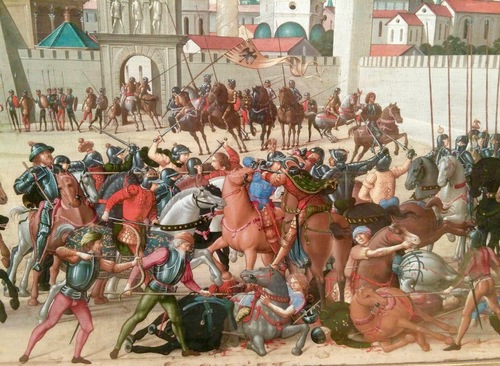