What's the strangest thing you've ever done in the name of crowdfunding?

Ok, so... here's the thing. Crowdfunding is fun, but it's also bloody hard work.

I've sent hundreds of emails, handed out postcards, held a reading at a local branch of Wetherspoons, sent countless messages, thousands of tweets, pestered probably now ex-friends on LinkedIn and Facebook and generally made a thorough nuisance of myself. Oh and I've also dressed up and wandered around at various events (accompanied by a playlist of WW1 trench songs). 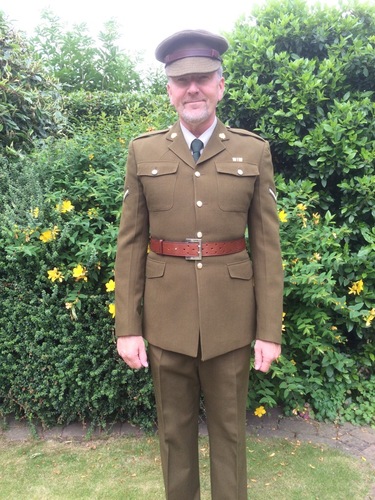 It's gained me a few hundred pledges, of course. It's raised over half the money that the book needs in order to be funded. It's also led to a few rather awkward moments with a few people who object on principle to anything that goes by the name of crowdfunding... even if this - the Unbound model - doesn't quite raise the same objections.

No matter, because I've also had some wonderful, interesting, fascinating, stimulating conversations with people face-to-face as well as on-line. People have told me stories about long-lost relatives who served, tales from their family histories of heroes whose names are still remembered, still discussed. Others have told me of their own experiences, serving soldiers, ex-soldiers, relating what they know to what I've written about the experiences of men 100 years ago.

I've also had some fabulous emails from interested parties offering support, advice, assistance and knowledge. One man took one look at the video and began an online conversation with me about the IWGC graves team pictured at the start of the video, two of whom are wearing VC medal ribbons. (You can find out more about all that in this shed post.)

So on balance, the crowdfunding experience - though tiring, though demanding and though massively time-consuming, has been a good one. It's not just about the money. (Of course, that is important!) That's what I tell myself, anyway; that's what I've told those 'what's in it for me' objectors, too. There's a whole lot more to crowdfunding with Unbound than merely financing a book.

But that does, of course, remain the bottom line.

So, what have you done in the name of crowdfunding?