One of the most rewarding - yet unexpected - advantages of crowd-funding has been the level of engagement with readers (or would-be readers) - even those who may have no intention of pledging but have an interest in the subject matter.

One such occured the other day. I'd posted a link to the book on one of the many World War One sites on Facebook. As usual, my link to the book page made the still image from the video prominent, and one chap decided to take a closer look st the photograph.

Before I go on I should explain that the picture - from the Commonwealth War Graves Commission collection, used with their generous permission (they've been very supportive at all stages of writing and research) - is catalogued as showing the '129th Exhumation company searching the Passcehdaele battlefield' and thought to have been taken in 1919.

But my eagle-eyed correspondent noticed that not one, but two of the soldiers shown are wearing VC medal ribbons. I didn't need to be told how unusual that would have been. Clearly, the men had spruced up a bit for the photo. But was there another, more significant reason for this being such a high profile search team?

The following year, in 1920, four unidentified bodies were exhumed from each of the four main Western Front battlefields - Ypres, The Somme, The Aisne and Arras - and taken by road to a chapel at St Pol. There, the four stretchers were draped in the Union Jack and at midnight midnight on November 9th, Brigadier-General Wyatt entered the chapel by candle-light and selected at random one of the stretchers, after which its load was placed in an awaiting coffin and the lid sealed and secured.

The next morning the coffin began its final journey to Westminster Abbey - one of only a handful of bodies ever to be repatriated. Later that same month, the coffin was lowered into the ground and covered with earth specially dug from Ypres and the grave of an Unknown Warrior - the Unknown Soldier - took its honoured place in the resting place of Kings and Princes.

This fascinating episode features in my book, where the men are assigned 'special duties' - which for Jack means filling half a dozen barrels with soil for the ceremony. But could this photo show the moment one of the corpses - maybe the very one that now lies in the Abbey - was exhumed?

It's an intriguing possibility, and one I'd never have considered had it not been for the process of crowdfunding this novel! 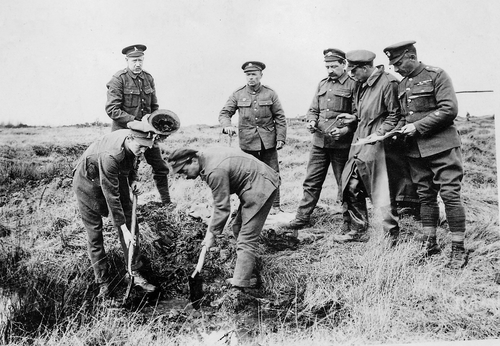