Unfortunately, the good people over at Unbound Towers don't work weekends, so this post is unlikely to reach you before Monday morning. But writing today, Saturday 13th August, the day the GB Men's Eights won Olympic Gold at Rio, is especially appropriate and poignant as a former Olympic gold medallist in the same event was killed on the Somme 100 years ago this year.

Frederick Septimus Kelly was no ordinary Olympian (if there is such a thing). Lieutenant-Commander Kelly served with distinction, seeing action first in Gallipoli where he was wounded (twice) before taking part in the Somme offensive.

And not only was Kelly a top-class sportsman (winning gold in the 1908 London Olympics as a member of the Great Britain Men’s Eights) but he was a composer, too - a musician of immense promise and another in the roll call of artists whose legacy speaks of enormous, unfulfilled potential.

He was also a great friend of Rupert Brooke, and with fellow composer/warrior W. Denis Browne scoured Skyros for a suitable 'corner of a foreign field' in which to lay the poet to rest. Shortly afterwards he composed the moving tribute (above) to his friend, a work filled with the promise of what would have been - but for the war - a major musical force.

He is buried in Martinsart British Cemetery where - unusually - the grave markers are carved from a local red sandstone rather than the more common, white Portland stone that is so familiar. 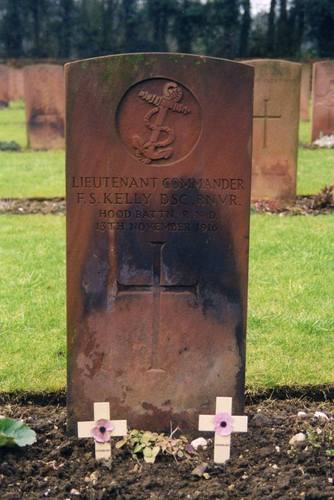