Bit dusty in here, isn't it? Let me just blow a few of these cobwebs away...

RIght, that's better. Although I've neglected the shed just lately, I've not been idle. Far from it. In fact, I'm about to embark on a tour of The Somme, taking with me this - a book by my postman's uncle. Well, postwoman actually, and great-uncle. 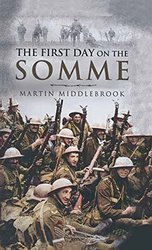 Martin Middlebrook is an icon among military historians, internationally renowned, award-winning and best-selling. He's in his nineties now so the battlefield tours he once personally conducted no longer have him at the helm. But his mind is sharp and his interest in military history - and The Great War in particualar - is as sharp as ever.

I have my postwoman to thank for all this information. A chance encounter on the doorstep as she delivered a letter, and an article in the local newspaper about my involvement in the CWGC Living Memory project led to one of those conversations you couldn't, as an author, script for want of credibility.

'Are you the same Tim Atkinson who was in the 'paper last week,' she began. I hadn't actually seen the article myself and didn't know it'd been published, but was aware that it was lined up.  We had a brief conversation about the project, and about the local war graves, before she dropped the bombshell. 'My uncle's really keen on World War One,' she said. 'In fact, he's written books about it.'

And that was that. The irony is that until relatively recently (six, seven years ago) Middlebrook actually lived in the same town as me (and the postie) - and a matter of a few hundred yards down the road, at that. He moved from the area to be nearer family, so the chance to meet the great man face-to-face never arose. Unless, of course, he comes to visit his great neice...