A hero in the family

Everyone - everyone, that is, with a family history stretching back in the UK for a few generations - has their own, personal Great War story. Mine is a simple one, maybe; but how it affects me - and how it came to inspire this book - is quite complicated.

My great Uncle, William Foster Johnson, my great-grandmother's brother, fought and died in the Great War. His record is a proud one: he won the Military Medal, the Distinguished Conduct Medal and was awarded a bar to the latter (effectively getting the medal twice) for ‘tracking down and killing a German sniper dressed in British uniform.’ That's quite something.

I sometimes wonder what I’d have done in his place. Would I even have been in his place, in the trenches, facing the enemy? As Philip Larkin once said (of Wilfred Owen) ‘you wouldn’t catch me waving a revolver at thirty Germans and getting the MC thereby…’ I suspect my response would not be too dissimilar.

All of which has a more than a slight bearing on the story I’ve chosen to tell in The Glorious Dead. Although I've always wanted to write a book about the Great War, when I began to seriously think it through I realised that it couldn't be a book of action, killing, attacks, battles and advances - partly because I'm by no means certain that I could have taken part in them. That essential element in any imaginative endeavour that enables you to put yourself in the position of those about whom you are writing is missing. I can't imagine being at the Front and fighting. I’m not certain I’d have had that courage. Or recklessness.

What I might have had is the courage to do is make a stand, to oppose the war, to refuse to fight. But even then, I can’t be certain. Perhaps I'd have succumbed to the enormous pressure on all young men to do what was popularly thought of as their 'duty', albeit - if possible - in some non-combatant capacity.

So I imagine my war would have been spent in uniform, digging - graves, trenches, foundations, whatever - but not fighting. I can put myself in the place of those who did this awful job because I can see it would have been the kind of thing I might have done - might have had to do - back then.

Not that Uncle Will was ever required to perform such duties. Or was he? Because in February 1918 when so much of the British Army was reorganised, when Batallions were merged and the strength of brigades reduced, he found himself suddenly a member of the 10th Entrenching batallion, his own under-strength 12th West Yorks having been disbanded.

This reserve force of men (soon itself to be re-deployed into front-line fighting units to make good the losses incurred in the German Spring offensive) was engaged for a time (as the name suggests) digging - trenches (in antipation of a German offensive), foundations for various temporary camps - and graves.

But pretty soon afterwards, Will was back at the front as part of a front-line infantry unit. And in May 1918 he'd become another fatality of the war, and was lying in a French grave himself. 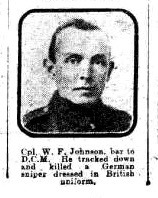