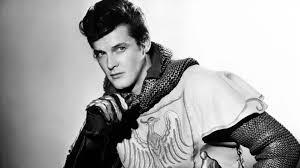 I am pleased to say that the editor that Unbound assigned me delivered an impressive series of incisive thoughts. The manuscript has been massively improved. It's now in the hands of a copy editor meaning, I hope, that unwanted apostrophe's, spelling erors, meaningless  commas; semi-colons, and stray and unwanted punctuation; will all be ruthlessly excised?!!!!

The passing of Sir Roger Moore reminds me that there has been a mystery in my life which, now, I will almost certainly never solve: What was Roger Moore doing at my school?

It was the 1950s. I hadn’t been at Park Hill Primary School for very long before I realised I was in a minority. Everybody else had a television set. My family didn’t. This was brought home to me in an unusual way. The whole school was enjoying dinner in the school canteen when the headmaster, Mr Laban, appeared, followed by Roger Moore. Everybody else in the school canteen knew who Roger Moore was and immediately began singing the theme tune to Ivanhoe, the television show that had first made him famous.

Despite not knowing the words or why we were even singing the song, I tried to join in.

Roger Moore smiled graciously, nodded and waved and left, taking Mr Laban with him and leaving behind a canteen full of chattering children, and me not having the faintest idea of what was going on.

I puzzled over it for the rest of the day before coming to the only conclusion that made sense to me. Clearly, what I had witnessed was some bizarre school ritual, one in which this mysterious I Dunno song was used to celebrate the arrival of a new teacher.

Not long after that, my family acquired a television set. One of the first shows we saw was Dixon of Dock Green. After that, we watched Cannonball, Sugarfoot, William Tell, Laramie, Davy Crockett, Robin Hood, Wyatt Earp, Rawhide, No Hiding Place, Tombstone, The Buccaneers, The Range Rider, The Lone Ranger, Gunsmoke, Have Gun Will Travel, and Ivanhoe. At which point I said to my mother, “You see that man? Ivanhoe?”

“He’s a teacher at my school.”

Those were simpler times. Not only did my mother believe me when I told her that Ivanhoe was a teacher at my school, but all of our neighbours believed my mother.

RIP Sir Roger Moore. And thank you RB for the prompt.