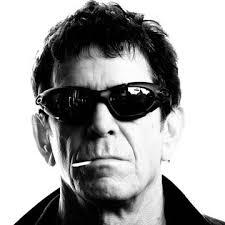 I was never a fan of the Velvet Underground, nor of Lou Reed, until around 1990, when he collaborated with John Cale on ‘Songs for Drella’, a tribute to Andy Warhol. During that time, he released two other albums, ‘New York’ and ‘Magic and Loss’, both of which I played to death, enjoying one song in particular, “Warrior King’, a song in which Lou Reed declared that, if he had the power, there would be: “A steak on every plate/a car for every house/And if you ever crossed me/I'd have your eyes put out.” I’m not a fan of cars or steak but I liked the point he was making.

Not long after the release of that album I was at the funeral of Rupert, a victim of the AIDS epidemic, and one of the kindest and gentlest of men. Following the funeral, Rupert’s partner, a man prominent in the arts (and also, though few of us knew it, a friend of Lou Reed), held a wake at the house that he and Rupert had shared. The wake was a warm and loving affair, all the talk being of Rupert and his kindness and of how beautiful the ceremony had been. Then word went round that “Lou Reed was in the garden”, and Rupert was forgotten.

I, meanwhile, had been helping myself with unstinting generosity to as much alcohol as I could lay my hands on. Hearing the Lou Reed news I vaguely wondered what I would say to him if we met. The best plan, I decided, would be to say nothing. The alcohol had other ideas.

Lou Reed came into the house. I was surprised to see that the man who once advised the Ramones to “always wear a leather jacket” was dressed in a cream-coloured cable knit cardigan, the kind that has brown wooden buttons on the front and reindeer on the back. A short while later, as I sat slouched in a chair, I discovered that Lou Reed was standing with his back to me. It was then that the alcohol, busily coursing through my body, decided to have a word with Lou. The forefinger of my right hand took on a life of its own. I watched, appalled, as it moved further and further away from me and closer and closer towards Lou Reed, before jabbing, him, insolently, in the small of his back. And also in the eye of a reindeer. Lou Reed turned and stared at me. I stared back in drunken horror. I had no idea what to do or what to say. Luckily, the alcohol did. “If ever you become a warrior king,” I heard my drunken mouth say (or, more accurately, slur), “I would love to be a prince in your army.”

There was a horrible silence as Lou Reed looked at me for what seemed like an eternity. Then he said, “Thank you,” turned away and carried on with his conversation.

Fear and adrenalin had now rendered me sober. But I was pleased with the way I’d avoided a potentially embarrassing, not to say violent, situation. Until I remembered the words, “a prince in your army”. A Prince. Any normal person would have simply said, “I would love to be in your army.” But not me. Oh no. I had to be a Prince.

But then again, that wasn’t me – that was the alcohol talking.

Lou Reed, alas, is no longer with us. I’m glad that in his later days he found contentment with his partner, Laurie Anderson, another hero(ine) of mine; and with Tai Chi, which, apparently, he practised with addictive diligence. And, for what it’s worth, I’m happy to say this: if Lou Reed ever returns to this world in the guise of a “Warrior King” – determined to create “a steak on every plate/a car for every house” – I’d still volunteer to be a prince in his army.  I’ll go further. I’d even accept a subsidiary role.