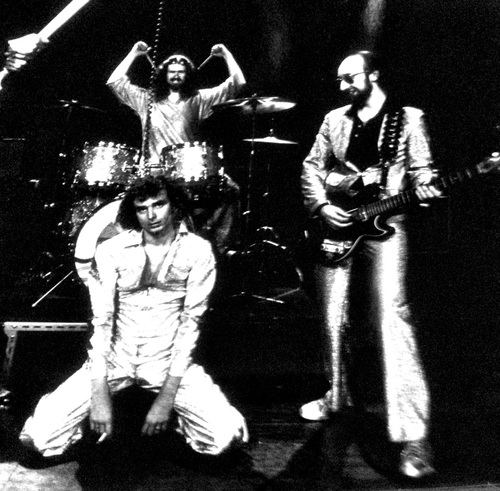 Mr John Dowie & the Big Girls Blouse was a band comprised of me (lead vocals and Stylophone); Dick Nelson (guitar and arguments); Jim Bates (drums and one-liners ); Rob the Roadie (roadie); several bass players (none of whom ever seemed to fit in); and John Mostyn, administrator/manager, who later went on to administrate/manage lesser Brummie bands such as the Beat and Fine Young Cannibals.

My band didn’t last very long but during its short life played some of the popular rock venues of the time, such as Dingwalls, the Marquee, The Greyhound in Fulham, The Hope & Anchor and a poor benighted polytechnic somewhere in South London.

I’d been left alone before the gig. The rest of the band had gone off somewhere to eat. I don’t eat. I drink. Wandering into the student bar I found there was some sort of deal going on regarding shots of vodka. A Buy One Get One Free sort of deal. It made more economic sense, it seemed to me, to buy twelve and get twelve free. Soon I was downing quite a lot of vodka, laced with orange juice (a health drink) while expounding at length to a student I’d met about how professional a band we were, and how much time we spent rehearsing our shows in order to give the best performance possible. Strangely, the more vodka and orange I drank, the more sober I seemed to become. This feeling stayed with me until I stepped onto the stage and into the glare of the lights. I then discovered that I was helplessly drunk. I can still recall the look on the face of the horrified student I’d been speaking to, staring up at me from the audience, as the band played the backing to one song and I sang the tune of another. Meanwhile, I manfully struggled out of the layers of stage clothing I’d put on earlier. I knew that costume changes were due, I just didn’t know when. I’d got down to my underwear when John Mostyn, our aforementioned manager, stepped on to the stage. “Hallo John,” I said, in some surprise. “What are you doing here?” “I’ve just spoken to the Social Sec,” said John. “If you keep your knickers on we’ll still get paid.”

I managed to keep my knickers on through the rest of the show and was still wearing them in the dressing room afterwards as I roamed around it telling everybody how well the gig had gone. It was then I noticed the dressing rooms windows, which were curved. This meant, it seemed to me, that the windows were made of some kind of transparent rubber. I had never seen transparent rubber windows before. Neither had I seen a chair bounce off a transparent rubber window, so I decided to throw one at it to see what it looked like. I was genuinely surprised when the transparent rubber shattered, rather like glass, and the chair sailed through it, landing in the street below. I then felt rather cold. I finally began putting on some clothes on as the Social Sec appeared and, seemingly unaware of the howling gale coming through the broken window, and seemingly unbothered by the appalling performance I had just given to his student audience, handed over a cheque. Which surprised us all.

But then, I had kept my knickers on.