Me and Marc Bolan (another story not in the book)

Marc Bolan died on September 16th, 1977. He was 29. Most people, when you say his name, will probably think of the curly-haired leader of T. Rex, originator of glam rock, enthusiastic Rider of White Swans and proponent of Hot Love. I enjoyed that particular incarnation but the one I’m more fond of is an earlier one – one in which Marc Bolan sat cross-legged on the floor, strumming an acoustic guitar, eyes shut tight, bleating songs about elves, dworns, Travelling Tragitions and a girl called Debora who, by some strange coincidence, “looked like a zebra”. Meanwhile, the only other member of the band hammered away on a pair of bongo drums. This was in the mid 1960s and was considered by us, the audience, to be entertainment. The two-piece band was then known as the lengthier Tyrannosaurus Rex, so named, Bolan once explained, because he “couldn’t believe that anything so huge once roamed this earth”. This might have made more sense if he and his bongo-thumping friend weren’t both so tiny.

I first became aware of Tyrannosaurus Rex while browsing in a record shop. Idly picking up a copy of their first album, the snappily titled “My People Were Fair And Had Sky In Their Hair But Now They’re Content To Wear Stars On Their Brows”, I was thrilled to see that the LP was dedicated to “Aslan & The Old Narnians”. As a fan of C S Lewis, that dedication meant a lot to me, most particularly in its use of the phrase “The Old Narnians”; the implication being that the New Narnia wasn’t up to much and the old Narnia was the one we should all go back to. I bought the album, took it home, played it and was, at first, a little mystified by its sound qualities (Tyrannosaurus Rex are the only group in history whose records, when played backwards, sound exactly the same). But I enjoyed its eclectic and often daft lyricism – a lyricism not enjoyed by all of his listeners, but one that Bolan was happy to defend. Having been told by a journalist that his words “made no sense,” Bolan said to him. “Pick any lyric you like and I’ll explain it to you.” “All right,” said the journalist. “What about: ‘I met a woman she’s sprouting prose/she’s got luggage eyes and a Roman nose’. What the fuck are ‘luggage eyes’?” “Eyes with bags under them,” was Bolan’s reply.

Tyrannosaurus Rex made occasional visits to my home town of Birmingham, generally at Mothers Club in Erdington, usually in the company of John Peel. John Peel was also with them when they played Birmingham Town Hall, in 1969. Peel read a seemingly interminable extract from “Lord of the Rings,” and was then followed by a young David Bowie, treating us to a mime act so horrendous that, years later, people who hang around Covent Garden pretending to be statues would appear vibrant and cutting edge. A programme was on sale at the concert, and in it there was an advertisement for “The Warlock of Love – Marc Bolan’s first book of poetry”. I sent off my Postal Order for, probably, 7/6d and waited. Then I waited some more. Finally, I had enough of waiting and wrote a pompous and angry letter demanding the dispatch of my “long awaited copy of Marc Bolan’s first book of poetry”. Embarrassingly, it arrived the next day.

The reason for the book’s delayed arrival was, thrillingly, made clear when I opened it. Marc Bolan’s signature “to John dowie” was on the flyleaf. Presumably, he had told his publishers not to send the books out until he’d signed a few. If so, I don’t think he signed many, because the book occasionally turns up on ebay (about 250 quid, since you ask), and I have rarely seen a signed copy on sale. But then, I would never sell my copy and I don’t suppose anyone else who owns one is likely to either. I treasure mine. The book was published in 1969 and it’s just about the only thing from those days that I still have. That and the pimples. 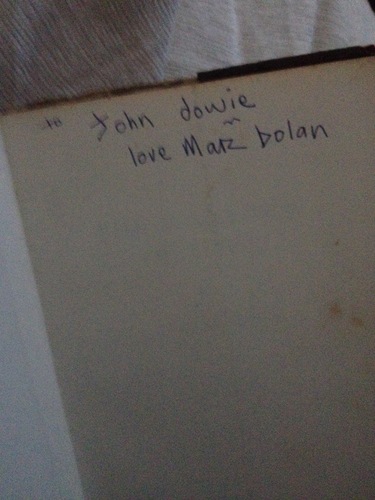