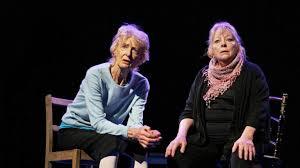 In the early 1980s, when I was performing comedy and venues were scarce, I would sometimes book myself into short runs in various fringe theatres. One of them was the Finborough, a tiny room above a pub in Earls Court. At that time the theatre was run by Mike McCormack, along with assistant director, Nina Grahame. I became friends with them both, so much so that when Mike told me about a show he was directing elsewhere, featuring student actors, I said I’d go and see it: a big step for me because if I’m going to the theatre I prefer to be in the part of it that’s lit, rather than the part that’s dark. But I was glad that I went. It was one of the best nights out of my life.
The evening began conventionally enough. We sat in rows. The play started. After the first scene, the first row of seats was removed. Baffled punters stood and watched the second scene. Then the second row of seats was removed. This went on until there were no seats left. We were then taken around various parts of the building (a community centre), watching scenes set in different locations – one of them being a toilet. Student actors not only had to act, but had to act with the audience only inches away. And in a toilet.
I loved the show and told Mike so afterwards, loudly and at length. Luckily for Mike, our conversation was interrupted by a member of the cast, who, after exchanging a few remarks, said he would “see Mike tomorrow” and left.
“That guy is amazing,” said Mike, which baffled me somewhat. His acting had been okay but nothing special. “How come?” I asked. “He has the most dreadful stammer,” Mike told me. “So much so that he can barely get a word out. But when he’s on stage, he’s fine. And after a play he’s good for another two to three hours.” "Blimey,” I remember thinking. “Maybe this acting lark has a point to it after all.”
Something similar is currently happening at the National Theatre.
When actors reach their later years, and learning lines becomes at best difficult or at worst impossible, the usual solution of their chosen profession is to toss them onto the thespian scrapheap, and that’s it. The luckier ones might get a role in a sitcom or an episode of Midsomer Murders; the rest are simply forgotten. Phelim McDermott and Lee Simpson, directors of the Improbable theatre company, decided to do something about this. “If learning a script is all that stands in their way,” reasoned Phelim, “why don’t we just get rid of the script?” This they did. They then recruited a small company of actors and began working with them on developing improvisation skills. “Lost Without Words” opened at the National’s Dorfman Theatre on March the 4th. Intrigued, I went to see it. Again, I was glad that I did. This was another of the best nights out of my life.
The on-stage company comprised one male actor, four women and a musician, Steven Edis. Lee and Phelim were on stage also, setting scenes and offering guidance when it was needed. Which was seldom.
To see actors in their 70th and 80th years still prepared to learn new techniques, brave the possibility of failure, and give a lie to the notion that your career is over because you've reached pensionable years was joyful enough. But there was more.
The final scene began with two women sitting side by side. The male actor joined them. “Come and sit between us,” said Caroline Blakiston. “Yes,” added Anna Calder-Marshall. “Come and enjoy our women’s warmth.” Tim Preece sat. Georgine Anderson and Lynn Fairleigh slowly and gracefully crossed the stage. All four women began gently stroking and caressing Tim Preece, not in a sexual way (well, a bit), but lovingly and with warmth. At first the actor tried to articulate his feelings. “Don’t tell us what you’re feeling,” suggested Lee Simpson. “Show us.” The actor’s face became suffused with joy. Then he stood and made his way towards us; it was almost as if he were levitating. He reached centre stage, spread his arms wide, then proclaimed, “I’m Me again!”
The lights faded to black and we applauded.