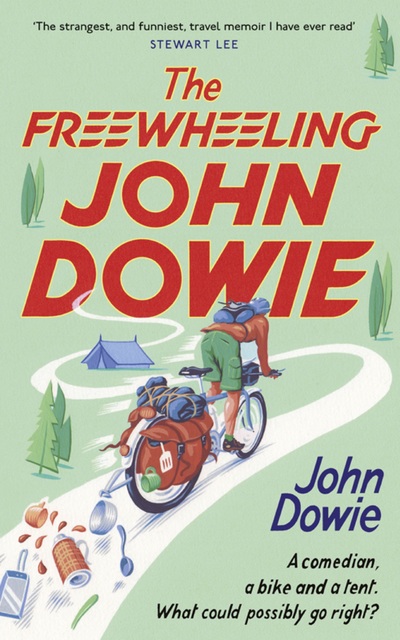 Biography | Humour
Rewards for this book are not available.

Signed edition of the paperback plus a Zephyros Lightweight weatherproof one-man tent. Streamlined against the wind as well as being quick and simple to pitch: just the one pole to deal with. The inner door is fitted with a mesh panel for effective ventilation, and the porch is easily big enough for storing your gear once you turn in for the night. (Used by the author approximately five times so in nearly new condition). Only one available.
$110  + shipping
5 pledges

Delivered to your door plus a story

A signed edition of the paperback will be delivered to you by the author, having ridden his bike to your front door from at least twenty miles away, followed, in less than a fortnight, by a one-off printed and bound story of the author’s journey, signed and dedicated to the recipient. (travel and accomodation may be requried if you are far from London)
$235  + shipping
4 pledges

Live in your living room

45-minute performance of extracts from the book read by the author, to you and your guests, in the privacy of your own home. Plus a signed paperback delivered to your door plus a story (travel and accomodation may be required if you are far from London).
$625  + shipping
1 pledge

Your name in the front of the book, plus everything up to the Live in your living room level (except camper's special and bumper package)
$2,500  + shipping
1 pledge

Your name listed as the book's Patron in the front of the book. Only one available

If you’re thinking of becoming a stand-up comedian (and who isn’t?) then here’s some advice: don’t start doing it in 1972. I did, and it was a mistake. In 1972 there were no comedy clubs, no comedy agents and no comedy future. There was, however, the Edinburgh Festival Fringe. I went there that year, making my professional debut and getting my first review, a bad one. (“Fatuous”. The Scotsman.) But a bad review was hardly surprising. Comedy requires practice and, with venues being almost non-existent, practice was hard to find. But I persevered, doing gigs where I could, in folk clubs, music venues, fringe theatres, universities and rooms above a pub. Things improved. By the end of the decade, I was working regularly and earning a living. In the 1980s, “alternative comedy” arrived. With it came more gigs, more money and a lot more comedians. By the 1990s, comedy was big business and about to get even bigger. It was then, with impeccable comedy timing, that I packed it all in.

It was as though my departure was just the break that comedy was waiting for. No sooner had I stopped, than comedians were earning vast amounts of money performing in venues the size of small countries. I, meanwhile, was in a different sort of venue – a one-man tent. How did this happen? Simple. It happened because (as caring professionals have told me) I have an addictive personality. This doesn’t mean, as I assumed, that once you get to know me you find me endlessly fascinating. No, it means that once I get hold of something I like, I do it to death. Which is what happened when I bought a bike.

Oh yes, I thought I could handle it. I’ll just have the occasional ride, I told myself. Perhaps at weekends. Or to unwind after a stressful day. What a joke. Soon I was having bike rides before breakfast. Then I was riding my bike virtually every minute of every day. It got worse. The more bike rides I did, the more bike rides I wanted to do. Soon I was craving longer and longer journeys, friends, family and work all forgotten. In a very short while I had sold my flat, bought a tent, and was riding my bike all the time. Which is why, as former friends and contemporaries dined at the Ivy, I ate beans from a camping stove; as they drank sophisticated cocktails at the Groucho, I drank wine from a plastic mug; as they snorted heaps of cocaine, I rubbed liniment into my legs. The question, though, is this: which of us was the happier? And the answer is: them. Obviously.

I should make it clear that the bike rides I go on are not the kind enjoyed by the shave-your-legs-and-dress-yourself-in-Lycra sort of cyclist. I’ve got nothing against these people, but they’re not my kind of cyclist. My kind of cyclist tends to be either very old or very young, on rusty boneshakers or bicycles with training wheels, and they only have one thing in common: overtaking me on a regular basis. This is because I cycle more like a snail than a man, creaking along, my world on my back (or, rather, my bicycle’s back), with no idea of where I’m going or how to get there. Which explains the slow pace. I mean, if you don’t know where you’re going, why rush?

This book is not just about my life as a cyclist. It’s also about my life as a comedian. In one of those lives, starting off slowly then going rapidly downhill is a good thing. In the other, it’s not. It would have been nice if, just once, I’d got them the right way round. Like my bike rides, this book meanders from place to place, sometimes takes a wrong turn and occasionally gets lost. Which may not be a bad thing. If it wasn’t for getting lost we’d never know where we’re supposed to be. Or so I like to tell myself. All the bloody time.

It’s also a book that has no ending; at least, given that it’s the story of my life so far, I hope it hasn’t. I hope there are still a few more bike rides left: a few more hills to climb, a few more lanes to get lost in. But this is my journey so far. I hope you enjoy the ride. I did.