The Fox of Richmond Park

If the Animals of Farthing Wood had lived in London and hated each other a little bit more, their story may have been a lot like this one.

A pledger very kindly informed me that I haven't posted an update since June. Oops. Since I post on Twitter a lot, I kind of made the assumption that everyone knew how hard I was working on getting the book finished, but obviously (duh!) not everyone follows me on Twitter. Sorry!

I realise that other Unbound authors post updates every month, or week, but I have never been a big fan of blogging because I feel like writing weekly posts about how I'm feeling and what I'm up to would be really dull to read. I am self-deprecating like that.

But if you're interested, here's where things are right now...

It is almost there.

The Fox of Richmond Park (which I think is pretty great, despite the aforementioned self-deprecation) will be finished by mid-November. Then it will go to editors, to be made even better, then it will get a pretty cover (Eeee!) and then it will be on your Kindle, your phone, or whatever other fancy thing you like to read on, IN YOUR HANDS and IN YOUR EYES. Hopefully early next year, fingers crossed.

I am very excited about it :)

My book has become so much bigger than when I first imagined it. And I don't mean bigger as in number of words, I mean that the story has become something much more important to me.

I think we all agree that 2016 has been a pretty rubbish year. When I started writing this book, David Cameron was still Prime Minister, Brexit had not happened, Jo Cox had not been murdered, the idea that Donald Trump would be president was laughable.

I started out with the idea to write a book about London from the perspective of animals. The housing crisis was the main theme, with the last general election being the spark that ignited that idea. Now, it would be impossible for me to ignore these events.

This is not just a book about a fox finding a new home (not that it ever was), and I hestiate to tell you any more than that, because I am wary of giving too much away. I am also wary of making it sound so serious that you pull a face and say "Why on earth have I pledged for this again?" It is very silly in places. There are hipster rats. There MAY be a pigeon called Teresa. There are humans in it too, good and bad. I nearly cried writing one particular part.

I think this is a good place to stop rambling and thank you all again for pledging. I really hope you enjoy my story, when it finally makes its way to you.

And just because it's fully funded doesn't mean I don't want more pledges... Every new pledge means another reader, another potential review, and a few pennies to help me buy tea bags and cheese. Share this post with your friends, if you like :)

Thank you again for your ongoing support.
Kate 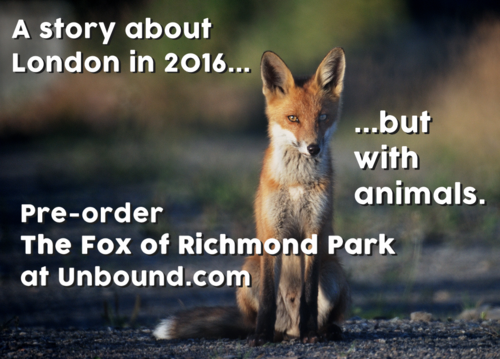