Why We (Do and Don't) Believe in Gods

It is most gratifying when someone follows up one of my tweets or these Shed posts with a comment or question. Otherwise, to be honest, it feels like I'm shouting into the wind. Mira had obviously found the talk on Why We Believe in Gods interesting, and then asked this brilliant question, 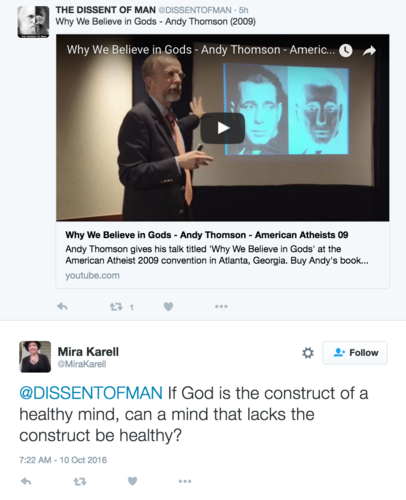 and this is how I answered, 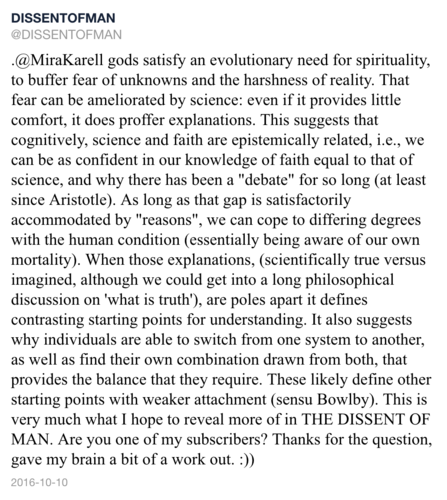 Now, I hope I managed to provide a satisfactory response. It's obviously not comprehensive, despite cheating in Twitter terms, by having a useful facility that automatically invokes TMI.me as an intermediary, allowing me to send audaciously long tweets. Reading it now, I'm not sure I got across the understanding that, as far as the potential for forming the god construct, there is no difference in health for brains of believers and non-believers. This is because nothing morphological is introduced into the cerebellum in order to have faith. Existing mechanisms that evolved and improved social interactions, and cognitive interpretations, and behavioural responses cooperated, to varying degrees, to generate a further adaptation that proved beneficial for a complex, problem-solving, solution-seeking brain, trying to deal with the real world. This became the centre of our spirituality when causal agents were attributed to imagined beings, shrouded in mystery, usually behind a cloud, and rarely seen except by the odd soothsayer or shaman.

Making our understanding no simpler, the past is shrouded in time. The writings of Plato portray him as a polytheist, but not necessarily a full blown dodekatheist believing in the Olympian Pantheon; it is unclear. Aristotle is even more confusing, beginning with around fifty deities to coincide with the celestial spheres, it is not until the final sentence of Metaphysics Λ (XII), that he resolves his heavenly Hellenic host with a quote from Homer (not Simpson) to just a single, creator "unmoved mover". According to Plato, part of Socrates' crime of which he was accused, and for which he was sentenced to fatally drink hemlock, was believing in his own version of a god, inconsistent with society. So arguably, if the three best known early philosophers, along with an interminable queue of great thinkers since, from Duns Scotus and St. Thomas Aquinas to Bertrand Russell and Jean-Paul Sartre, professed to a range of belief combinations, then that must demonstrate faith is not just a matter of logic and reason. 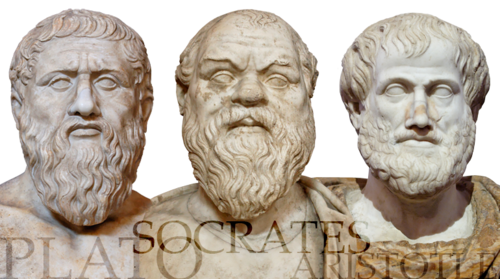 You'd be forgiven for having thought the opposite, from the reason-based arguments that atheists target religion today. Don't get me wrong, my personal views are several lengths of hearty disdain to the right of Hitchens, however, it is an unavoidable verdict that if spirituality is a product of nature, then, purely in terms of evolutionary benefits, a believer is justified in their faith, or at least, cannot be held accountable. An atheist may still think the person deluded, but whatever aspects of reality the believer may be disconnected from, they might restore some balance through their tradeoff with faith.

There's a whole World of possible alternatives, about which we know very little with respect to the underlying mechanisms. What we do know is that those mechanisms are common to us all and have been exploited to great effect, especially by organised religions. In an ideal World we would all appreciate our fellow humans from the equitable perspective of Relativism, where no particular view is dominant, but, unfortunately, that World is as contrived as the claims of any major religion, and it is indeed organised religion that is the reason, in so many ways, that our World is not a peaceful and tolerant place. It is yet to be seen the cognitive impacts of reinforced ideologies and ritualistic indoctrination, but organised religion very likely appears quite different when looking at brain activity, than homespun belief

The video that Mira watched is a recording of the psychologist Andy Thomson, giving a talk on Why We Believe in Gods. To answer this, and define the parameters to the science that will eventually elucidate the complexity of belief, Thomson works through the cognitive mechanisms that interact to build the concept of a god: decoupled cognitions, hyperactive agency, minimally intuitive worlds, promiscuous teleology and attachment, plus secondary constructs within our cognitive architecture that act to augment that model: intensionality[sic], empathy, guilt, obligation, etc. Nature has integrated these mechanisms as a solution to a problem, incognisant of any aim or purpose, because that’s what evolution does.

After I hit send for my response, I sat back in my chair, took a sip of java and tried to remember what the cover to Thomson’s book looks like. I couldn’t so I let my eyes drift across the shelves and stacks of books facing me and it was right there, upside down, but there nonetheless. (Aside: I wonder if light rays bouncing off the upside-down words on the cover were hitting my retina upside-down, which in this case would be the right way up for reading those words, only for my brain to invert the image so it was upside-down again, to reflect reality and how the book was relatively oriented, which my brain would invert once more, so that in my mind’s virtual image processor, the words appeared right way up, again, for me to read them). 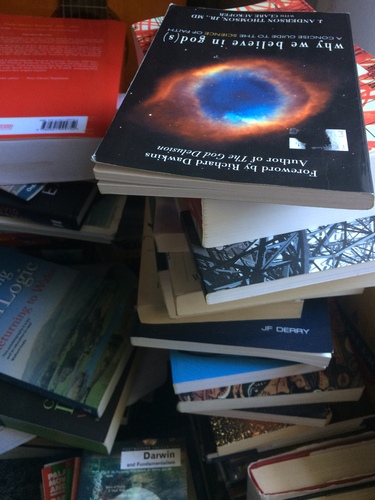 Thomson’s talk follows his book very closely, but there are very few illustrations to help, whereas in his talk which is well illustrated, it feels like he’s hurrying though to cover the wealth of material. There’s benefits from taking a look at both obviously, and it occurred to me that his book would provide a pretty good introduction to THE DISSENT OF MAN, because it lays the groundwork in the psychology of faith, but only dabbles in the more recent MRI neuroimaging evidence that has burgeoned at such a fantastic rate, I’ve had to rethink what our book should include, more than a couple of times since beginning this project at a 2003 conference in Ulan Bator (Mongolia), just to keep it up-to-date.

Thomson enthuses over just the single example that he gives (Kapogiannis et al’s 2009, Cognitive and neural foundations of religious belief http://www.pnas.org/content/106/12/4876.full) which didn’t make many waves at the time, mainly because of the groundbreaking work that preceded it, but has been picked up since and cited in a respectable number of subsequent papers, which is nice.

Notwithstanding, I have to disagree on one thing that Thomson says in the talk. He rightly predicts that it will be only a short time before textbooks also begin including this science of religion between their covers, and teachers begin presenting it to their classes. The upshot of this Thomson makes his big finale: that there will be litigation from the religious right, but he is confident about the evidence, so, “Bring it on!”. 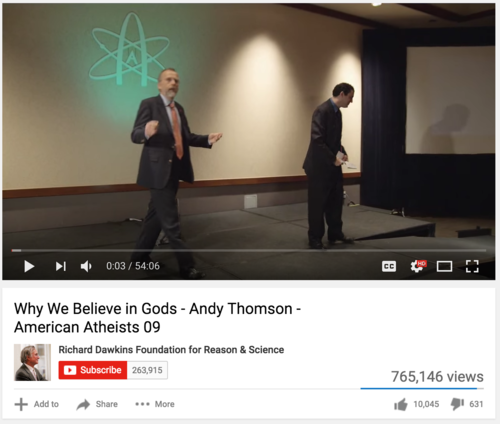 (this is just a screenshot, but please click here to got to YouTube and watch the video)

However, this he says will have resulted because, “we are on the threshold of a comprehensive cognitive neuroscience of religion, and it deepens the conflict between science and religion”. You can’t argue with the first half of that statement, we are, it’s happening, whether anybody likes it or not. But by increasing our understanding of why people believe, should ultimately bring a shared understanding to the debate, and not deepen the rift, as Thomson thinks. It will take time, and the uptake will be slow, but look at the acceptance of Darwinism today, compared with when it was first published (1859). Cognitive science of religion, or Neurotheology, isn't even that far yet. While there have been some important publications, none has had the runaway success that the Origin of Species enjoyed. Early popularity is one measure of an idea's reach, but more relevant is its long-term uptake and spread. Today Darwin is a household name, and even if everyone doesn't know the details, most people have some idea about evolution.

Sure, the faithful aren’t going to like it; no-one likes to be thought of as a case study. They’ll likely be in an Egyptian river (denial) for quite some time, and many will never accept that technology has finally demystified their state of mind. No supernatural beings. No sky fairies. No chosen people. Just the same banal, indeterminable existence for everyone on, “a planet that's evolving, and revolving at 900 miles an hour. It's orbiting at 19 miles a second, so it's reckoned, the sun that is the source of all our power. Now the sun, and you and me, and all the stars that we can see, are moving at a million miles a day, In the outer spiral arm, at 40,000 miles an hour, of a galaxy we call the Milky Way” (sorry Eric). And, if that isn’t enough of a miracle to fuel a sense of amazement, then find out more about the universe, our planet, its inhabitants, and about you.

I remember the first time when at secondary school, we worked through human reproduction, properly in detail. After all the tittering had died down, and the in-your-end-o (innuendo) passed, the mind-blowing complexity and exactness of those processes that move from oocyte to ovum, through fertilisation, to blastocyst, implantation, embryonic development until about week 11, then hopefully, successful foetal growth from thereon. But what an incredible start to life. I was already an atheist by then, but for me, that made it irreversible and absolute. If unguided biological decryption and execution of life’s code can get from a single celled oogonium (earliest form of an ovum) to you in 9 months, given nature’s tenacity and inventiveness, what’s the difficulty with getting from “cell to man” (as creationists call it) in 4.1 billion years?

Why add an arbitrary god when one is not needed? Why obfuscate your vision of nature by giving away the credit for its genius? It seems obvious to me, but I appreciate that is not the mindset of people who are religious. Our different positions in the spectrum of human thought, and many alternatives to both, are going to be discussed in detail in THE DISSENT OF MAN. We are so close to 100% good people. Who's going to help get us closer?

Thanks and all the best,