The Dissent of Man (OST)

hope you're surviving these strange days. Trump has just had another hissy fit on Twitter calling for the cast of Hamilton to apologize[sic] for being “rude” by ending their show last night with, essentially, a well-written plea for the continued protection of family and ethnic diversity, to his buddy-in-vice Pence who was made to squirm. Kudos to Brandon Victor Dixon and the other cast members of Hamilton for making a stand.

When I first thought about writing this book, the title occurred simultaneously with the broad scope to be covered, even the book cover had “selected itself”; almost automatically it was obvious what was needed to progress … our progress, of a staid and stalled conversation. We needed an injection of new vocabulary, the old ones were worn out; a new understanding of the processes involved, a new angle.

These ideas coincided with the emergence of a new field of study, the cognitive science of religion, that formed a catchall for the several strands of psychology and the behavioural sciences that were interested in aspects of spirituality and religion, in the main: cognitive psychology, evolutionary psychology, cognitive anthropology, artificial intelligence, cognitive neuroscience, neurobiology, zoology, and ethology. In my humble opinion, maturity of the collective endeavour into a true science arrived with a technological breakthrough, as is often the case. This last dozen or so years has seen a consolidation in the application of that technology into it’s own discipline, neurotheology. This now sits peaceably alongside its siblings, although the older ones sometimes try to take a swipe on the way past.

It’s such an exciting area, you can perhaps imagine my ongoing champing at the bit, impatient to see the final manifestation of those initial thoughts. Until it’s on the printed page, I really don’t know what it’s going to look like. We’ll find out together! At least we will know what it’s going to be called, The Dissent of Man.

Obviously a play on Darwin’s “Descent of Man”, it’s unfortunately, but necessarily patriarchal, otherwise the wordplay wouldn’t work, The Dissent of Person/People/Us just doesn’t conjure the same connections. Hopefully you can forgive me that un-pc-ness. In any case, I’ve always been fond of the title, and truly astounded that no-one else had thought to use it for themselves. It seems pretty obvious once seen.

That was until 2010, and then I thought I’d been pipped to the post. I had Darwin’s Wallace moment, a stomach hitting the floor feeling. I saw this, 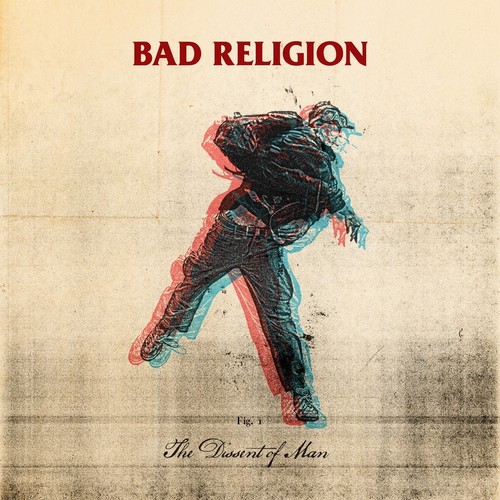 First panicked thought was that I'd have to think up a different title, …but the one I had was so perfect! Then I calmed down, had a closer look and realised there really was no similarity that would lead to confusion. That’s the reason you want a unique title isn’t it? So, that your *thing* stands out from the crowd.

I've no idea why it's taken such a long time, but I’ve only just fully listened to this album, all the way through. It’s really not bad. I think I was put off by the Wiki entry, “Bad Religion is an American punk rock band that formed in Los Angeles, California, in 1979”, and the opening to the first track, but now having persisted with it, there’s more melody than I expected for punk. Then I remembered that American punk has always been more blues-based than UK punk, think of Iggy and the Stooges and The Ramones. Having an accessible sound has probably helped Bad Religion stick around for so long. Hang on, 37 years, and they’re still playing punk? How old are these guys? A quick check, and I see that they're my kind of punks 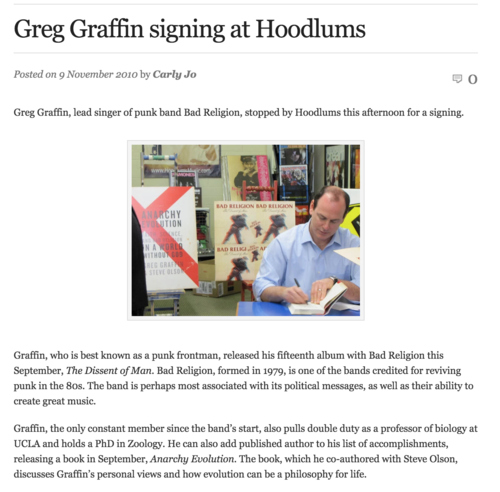 The lead singer is a Professor of Biology at UCLA with a PhD in Zoology and a passion for evolution. Who'd have thought it possible, although, when I was studying for a degree in Biochemistry, it was good to know that Hugh Cornwell from The Stranglers had troden the same path and was persuing a postgradute career when he formed his first band. I think the comforting thought that came of out that, was you could be a scientist, and still have a life. And now here's a veteren punk with very much a bovver boot in each campus. It certainly explains the album title, their choice of artwork, and some of the lyrical choices: climate change, the Scopes Trial, 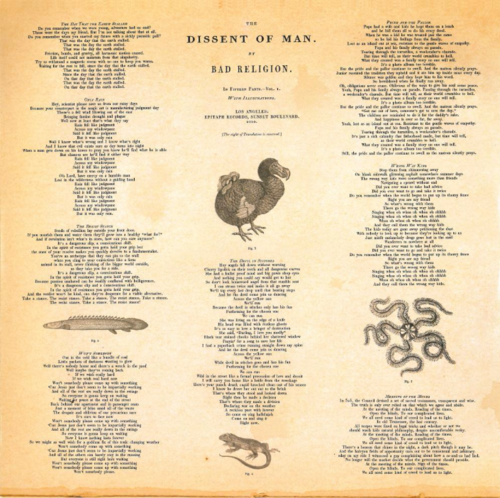 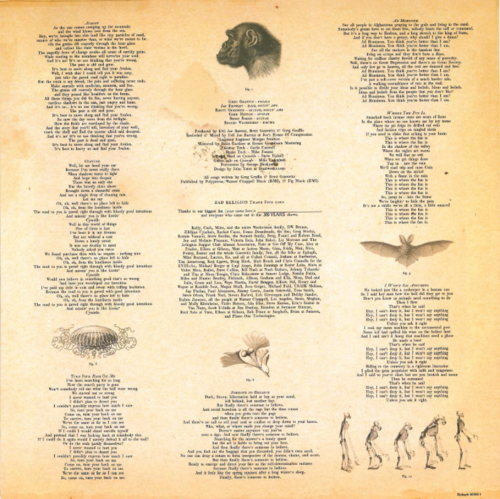 MEETING OF THE MINDS

In old Tennessee, the last century. All scopes were fixed on legal tricks and whether or not we
should teach kids natural philosophy, despite uncomfortable verity.
At the meeting of the minds. Reading of the times. Open the blinds. To our complicated lives.
We all need some kind of creed to lead us to light.

Appetite whetted? I hope so. I'll listen to most things, from Feldman (very very quiet and slow) to Mötorhead ("Everything louder than everything else"), so while I'm not quite pogoing after one listen, I can hear some things that I like, and will no doubt give a second blast. The album is on YouTube, so you too can listen via this widget (I hope it works, otherwise this is the direct link). I'd liken them to an early naughties, emo version of the Red Hot Chillis crossed with a medley of Saxon and Black Sabbath, marinaded in The Clash with a sprinkling of The New York Dolls, and served on a bed of The Damned and a side order of something bluesy and rocky, … Roquefort? No, I was thinking more along the lines of Led Zep, or latter day Rush. Have a taste…