Stats, But Not Static, Not Quite

just had a peek at our total. Still on 53%, but what does that mean in terms of reaching that magical fully funded status? Well, I'd like to share the progress chart that authors get to see behind the scenes on the Unbound website. 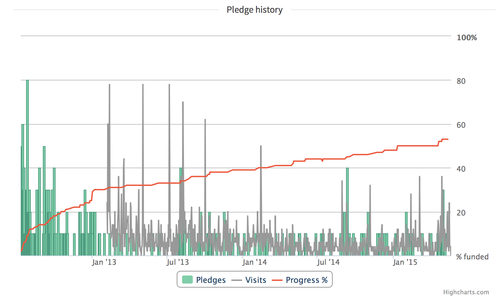 A few scribbles on the back of an envelope and the daily rate of funding between January 2013 and now has been 0.03% per day. "Not a lot!", as someone else involved with magic used to say.

Even so, I'm sure that we are both horrified by the prospect of that long-a-wait. I am doing what I can to drive this on, but it has to fit around my daytime work. Currently I am continuing to consult on evolution and Darwin and conservation ecology. The latest project has been using a computer model that I developed over ten years to test possible futures for the Mongolian Steppe. Climate change, different uses for the land, and development, all threaten the plants and animals there. The software is very useful to see what might happen under different scenarios, hotter average temperatures, more (or less) rainfall, more livestock, more roads, etc. A Japanese team from The National Institute for Environmental Studies at Keio University in Japan are the clever boffins doing this research, and I'm just helping them with a few technicalities.

When not thinking about biology, I spend the rest of my time writing about Blues and Jazz music for Universal Studios. This is what I have ended up doing since leaving full-time academia, to try something new, and keep a bit of money rolling in. It's mostly enjoyable too, writing about music you love, or discovering new music you didn't know. I'm afraid  home life gets relegated rather when there's a deadline looming, but we do make a big effort to eat together as much as possible and reserve some time each weekend to share. Less important things like shaving and tidying the study will just have to wait!

So, I just wanted you to understand I am doing everything in my power to keep this moving, but it has been a hard slog and I have only you to turn to yet again, to request the same as ever: please, please, pledge if you are able, and if you have already, then please upgrade your pledge if you can. Get your friends interested, and think about making gift pledges. If you have considered the levels where we get to discuss Darwin and Darwinisn and I interview you, but perhaps you have been left unclear about what is involved, and naturally if it's worth the asking price, then please do make contact for a chat. I would be more than happy to answer any questions.

Meanwhile, thank you as ever. This is going to happen, but I'll be beyond frustrated if it's going to take as long as I've estimated here, but even if it did, well, we've just ended up with the prospect of a mostly unwelcome government for five years. If we have to wait that long for things to change there, then perhaps putting a few years into literature doesn't seem quite so bad.

A final solace might be sought in Darwin's self-control in holding back On the Origin of Species, until he was certain of his facts. Famously he was forced into publishing prematurely in 1859 by friends and colleagues when it was evident Wallace had formed a similar idea. Depending when you assign the beginnings of Darwin's thinking on the subject, it was either the 22 or so years since 1837, about the time he was drawing his famous branching Tree of Life sketch in Notebook B, or the 17 years since completion of his first 'pencil' sketch of species theory in 1842.

Thank you, as ever,

* Unbound report 296 pledges remaining on the project page because that's based on the digital level only. 216 pledges assumes an average pledge of £13.70, but this is using the arithmetic mean. Better yet would be to take the mean weighted by the number of pledges at each level. This works out at £26.43, so there may be as few as 112 pledges required.