Hi, hope you’re keeping well. Here’s a fleeting update to keep you in the proverbial loop,

All the best,
Julian
Edinburgh 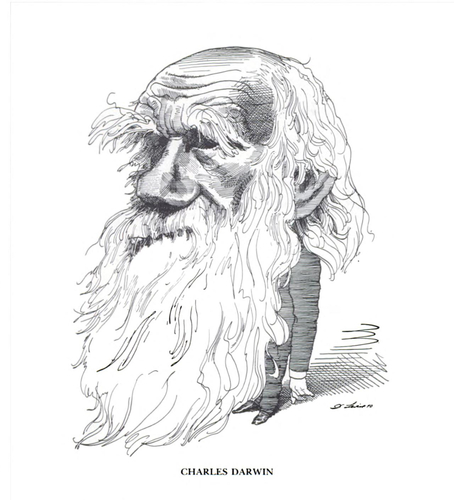 Very interesting. As a teacher I can tell you that the "orthodox view" - as the article puts it - among my students, is usually that Darwin invented evolutionary theory all on his own and presented it to a universally outraged, Puritanically religious public. People tend not to know about Wallace, or Chambers, or anyone else who was working on similar things at the time. It's interesting to find out about Matthew; I'm now wondering about the public reception of his work. Seems to me, though, that saying Darwin was a plagiarist is a bit like saying Newton was. Newton's weren't the only theories/laws of motion but he's justly remembered as having come up with the best ones that were on offer - likewise with Darwin and evolution. It's future generations that have claimed Darwin as the be-all and end-all of natural selection (if not in academia then definitely in the wider world), so in the absence of evidence to the contrary it seems rather unfair to blame him for that.

Hi Neil. You're right of course, the story that children are taught is overly simplistic, but honestly if you weighed them down with the detail, the simple message about natural selection would be lost to the history of development of the idea. It is fluid, concepts building communally over time, emerging from the hubbub. Some understandings get damn close to what we now have as our best model for nature. Matthew was as close as any in that he saw Malthusian checks (competition) and die offs, weak and strong, unsuited and suited. The reason it's not Matthewism is because his description was grainy and confusing, and dispersed as padding in a book about timber for the Navy. There really isn't much to base a science upon and it needed a figurehead like Darwin to independent discover the processes at play and develop the concepts through to their conclusion, and importantly, to the point where predictions may be made. Matthew was a bit cantankerous too. Instead of seeing the beauty of nature, he saw white supremacy and a world ripe for colonisation. Wars he welcomed to keep a nation healthy. The historical record is correct to focus on Darwin and Wallace while giving all others an honorary mention amongst good company (viz. Aristotle, Empedocles, Bacon, Descartes, Buffon, Lamarck, Blyth, Wells, Matthew, Chambers) in a footnote. As far as persuading anyone, Darwin just let the evidence do that, and he kept publishing evidence in support for the rest of his life. And in terms of whom, probably in the order, clergy, public, science, wife. But he never won over Emma's head, just her heart.

Nell, I am very sorry. That is a terribly embarrassing typo with your name in the previous comment.