When I first started compiling the material for this book in 2003, I approached the most famous and respected people in their field of interest known to me, without consideration of gender, sexuality, nationality, politics, hair colour, height, shoe size, etc. I mean, who cares about any of that?

That’s not to belittle anyone who thinks any of those things important, it’s just that when it came to recognisable names of people who might have a comment about Darwinism and religion, the names just presented themselves to me. If you do enough reading around a subject, you end up knowing who’s who. The problem seems to be that those names I first thought of just happened to be mainly blokes. But why?

Historical patriarchy undoubtedly underlies the reason, favouring men for top jobs while hindering women from progressing in their careers. Misogyny is expressed as ingrained sexism and male chauvinism, while institutional barriers for motherhood range from subtly gendered words in application forms to insufficient provision of support from pregnancy onwards.

To cap it all, there are conflicting results from studies of women who have made it into leadership roles. Women can be better mentors and motivators than their male counterparts, yet women overall are still less likely to want a woman boss. Female bullies target other women four times more than they do men. This is thought to be a function of too few women leaders, meaning their behavioural traits are more exposed and exaggerated than they would be if lost amongst the throng of men. This rather than a worrying prevalence of sociopaths in the board room. Although, there is that too.

These factors have led to there being an imbalance in the sex ratio of career scientists. Women scientists haven’t made it to the positions where they could have carried out the research or gained the same expertise as those men I initially thought of; below is an interactive plot and a good example of selection bias at successive stages in a UK funding award. Despite my being pro-equality, I also acknowledge that my own unconscious gender bias may have played a role. I didn’t think I had one, but evidently everybody does. That’s not a pleasant thought, but if that is the case, let’s compare some numbers and see what can be done to rebalance.

Breaking it down: in applying what I thought was a meritocratic approach, from pretty early on it was apparent that, for whatever reason, my list was dominated by men. So, shortly after, sometime in 2004-5, I drew up a list of women. Some of those women might not be as well known outside their field of interest, but I did try to find individuals with equivalent qualifications to the men: professorial chairs, publication record, etc. Subsequently, as I have encountered someone that has struck me as being suitable for inclusion in the book, I have added their name to this list.

This is not going to be an exhaustive statistical analysis; for that we’d need the raw data. Firstly, most of my contributors are drawn from academia and, specifically, disciplines identified within science, technology, engineering and mathematics, collectively known as STEM fields. Furthermore, within that categorisation, most work in the biological sciences. Taking a look at surveys taken in the USA and UK within the last half decade, they show roughly the same trends, and reveal quite a telling story for the biosciences:

Clearly there is a disconnect between women in their early career and fulfilment of aspirations they have for progress and promotion to the higher echelons of academia. Given that this is the territory of committees who make the decisions that effect those lower down the scale, it is easy to guess how institutional barriers might be maintained.

Looking at my own unconscious gender bias, I had initially invited 93 people to submit their contributions to the book, and many have, or are due to. Of this total, there were only 14 women which matches the above 15% frequency of women in STEM academia. There’s no way to test whether this is just a fluke, and it certainly doesn’t get me off the hook.

What does assuage my feelings of guilt a little is that, I didn’t need to do the sums to recognise that there were too few women in my list. Perhaps my unconscious gender bias falls to the correct side of shamefully embarrassing, because that gut feeling was enough to prompt drawing up that second list, and the stats look a lot better for it. Out of the new tally of 142, there were now 63 women, which is a vastly-improved-but-not-quite-equitable 44%.

Seeing Mad Max: Fury Road recently, I came away wondering why it is being hailed a feminist movie. Again, as with selecting interviewees, I didn't particularly notice that apart from the movie's namesake, one side were all female, versus the other side of male aggressors. I spent half the time wondering how they got rid of Theron’s arm. I got that the main baddy was an evil king in pursuit of his fleeing harem and future heir, but missing the feminist message, I just saw a pretty good chase movie, rather than the great radical movie seen by others. My loss. 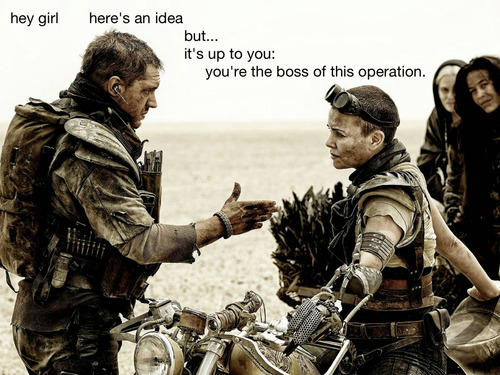 I think it goes back to my gender blindness. I’m far more focussed on the interaction of personalities and what people think: when not working on a computer, my face will be in a book, hardly ever looking at a TV, and only a handful of times per year in a cinema. That’s not snobbery, just choice, and chacun à son goût / to each their own. What I’m recognising is that perhaps I’m a not particularly visual person. Music is my passion, so synesthesia sounds like fun, I imagine. Alas, I have never experienced it, nor do I think in pictures as about three-quarters of us do. When writing, I just tend to choose the more musical phrase, the sentence that swings along to the metre of song.

I make no apologies for my gender blindness. It would be a better world if it was like that all the time, where gender is irrelevant. For all that, where this leaves this book, I’m not sure. Certainly let me know if you have an opinion. Add your comments below or make contact in some other way. In retrospect, I suppose a more balanced selection process from the outset would have avoided any issues. Conversely, I could have checked the numbers and been satisfied that I was at least mirroring the proportion of women professors in my original selection, and just left it there. However, I didn't. I reacted to having too few women, so added more, and I’m encouraged that I was on the case from the start.

Lastly, if I long for a world of gender irrelevance, just as I long for a world that isn’t hung up on sexuality, nationality, politics, hair colour, height, shoe size, etc., then it would be hypocritical to not use that as a standard whenever possible. This book is no treatise on equal rights and doesn’t carry an overt feminist message, nor is it going to make any conscious difference to the current situation in society. But, I’m blind to such things, remember? Subconsciously, by seeking to get as near as possible to an equal mix, either by including the same number of women as men, or ensuring their contributions occupy the equivalent space, there could be a subliminal impact. So that's what I intend to do.

It doesn't feel radical to me, and it might not be "rad." enough for you, but that’s as far I’ve got with these thoughts. What I now need is the time to complete the work and for that I can only allocate the time needed when we’re closer to our funding target. As ever, PLEASE, PLEASE PLEDGE, or if you have already done so thank you, but please consider upgrading to a higher level.

Now for that list of contributors and potential contributors in full. In no particular order, other than women then men,

Thank you, as ever,