I'll try to get around to writing more about the relevant bits of our recent trip to Indonesia, and for me the best bits, the Alfred Russell Wallace bits. Meanwhile, a note on something that is all too apparent as soon as we started travelling in Borneo: the nightmare problem that is the spread of oil palm cultivation.

This crop has made itself so useful, ubiquitous in the production of a vast number of food and other goods, that it’s hard to see how it will ever be controlled.

“It is locally used as a cooking oil, exported for use in many commercial food and personal care products and is converted into biofuel. It produces up to 10 times more oil per unit area than soyabeans, rapeseed or sunflowers.”

Of course politics and corruption are at play, but also straight forward market practise. Simply, the palm oil companies offer the local people more to grow and harvest the oil palms than they can earn otherwise. Perhaps three times more.

We stayed with one Dayak village where they have so far refused such offers and advances to collaborate with the surrounding plantations. This has earned them recognition and support from nearby Camp Leakey director and orang-utan expert Biruté Galdikas, because of the devastating impact from decimation of forest habitat. It’s a gallant stand, but tragically a rare one. 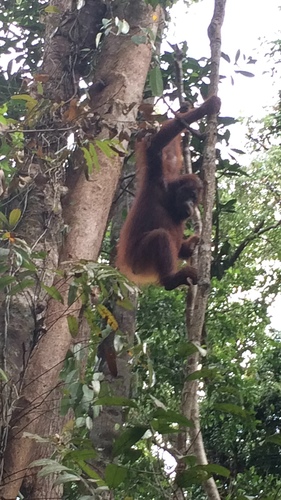 While these rural Dayak are intent to conserve the forest and its shamanic influences, the plantations have turned heads, bringing an economic motivation to a nation with a burgeoning Islamic agenda centred on its cities. They are worlds apart and the gap is growing, 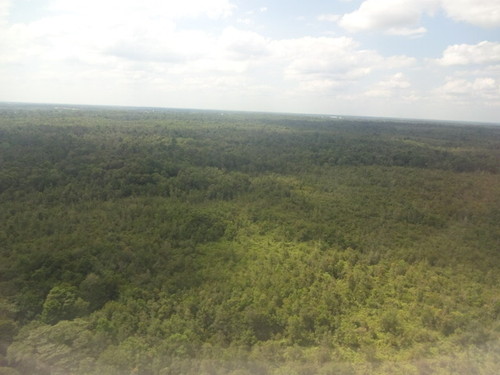 At a rate of four tonnes of oil per hectare, that’s a commitment of 10 million hectares, more than twice the size of Belgium, or nearly half of the UK. Significant, yes? Well, perhaps no. Indonesia's area is over 190 million hectares, with Borneo alone, nearly 75 million hectares. So, to reach production targets, you’re only really talking about the equivalent of a square of land, 200 miles long on each side. The third largest island in the world, Borneo is 830 miles by 600 miles, so it’s about a quarter of the forest that is required. A sizeable chunk, but maybe worth the sacrifice if that were all it involved. But, the island’s 19 million people have to live somewhere, and not all at the low density of the forest tribes. Nor is land use so precisely geo-topological. Patches of habitat are the common outcome, trapping the animals therein, until a conservation programme attempts to thread patches together by planting ecological corridors. By then, it’s often too late.

Furthermore, legal and illegal, large scale logging has been expanding in addition to the palm oil industry. That quarter of Borneo has already gone, deforested in the 20 years since 1985. Only about half of what was there originally remains, and so it’s from that any new palm oil production quotas will have to be met. The World Wildlife Fund (WWF) estimates 2020 targets will leave only 30% of Borneo’s rainforests for the future. That’s the good news. It gets even worse. 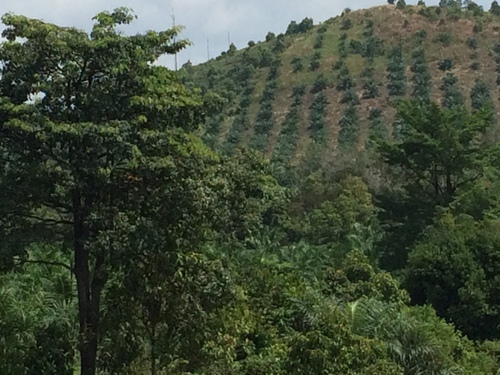 To understand the deeper problem, the plant’s botany is central to its long-lasting impact. Each oil palm is planted in a nauseatingly regular grid compared to the interconnectedness of the jungle. Darwin recognised this same ecological jumble shared by the forests of South America,

“Stately trees of many kinds, with smooth and highly coloured barks, are loaded by parasitical monocotyledonous plants; large and elegant ferns are numerous, and arborescent grasses entwine the trees into one entangled mass to the height of thirty or forty feet above the ground.“ 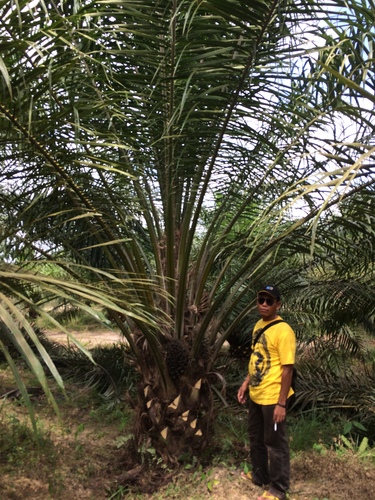 Completely clear of all other species, each oil palm is cultivated in isolation for 20 years. They begin to fruit annually after the first 5 years producing hard black berries that ripen into soft red ones. These are the source of the oil when harvested and pressed: a few millilitres from each, a trickle, to be sent for purification. 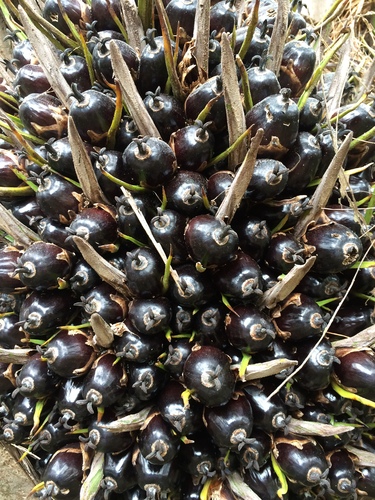 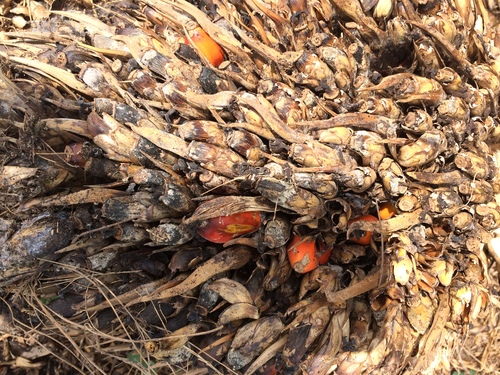 There has been a call to improve planting strategies so that they avoid clearing primary forest that has taken eons to establish. The hope would be some recycling of land between plantation and secondary forest. Unfortunately, the legacy of a plantation runs far longer than its 20 years. Recent research reports the higher levels of carbon sequestration are making a significant contribution to Indonesia’s overall carbon emissions. The leaching oil palm also strips out higher concentrations of sodium, calcium, magnesium, aluminium and silicon, than those found under any other land use in Borneo. Bacteria are proven excellent bio-indicators of ecosystem health. Soil bacterial communities are changed away from their long-term composition. The suggestion is that once it has been cleared after being used as a plantation, land is rendered useless and unable to regenerate anything recognisable as a forest habitat. 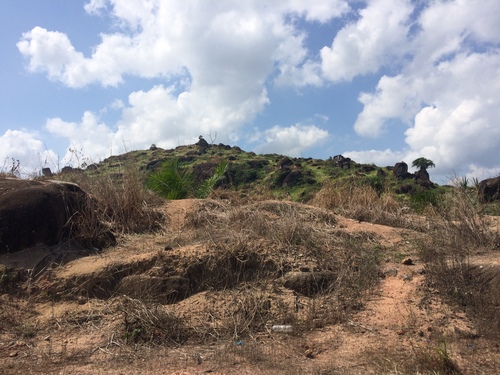 I don't know what can be done. I just keep noticing palm oil listed as an ingredient of just about everything. The WWF are applying pressure for sustainable palm oil production, for the industry to follow specific Better Management Practices (BMP), and for non-sustainable producers to be named and shamed. The central tenet of these practises seem to focus on not using primary rainforest, which earmarks it for protection whilst other land is available, but, how much of that is available in these regions? And, how long is that source going to last? Given the long-term impacts on soil fertility, and the need to appropriate more fertile land for every 20-year cycle, what is the really long-term solution?