Daedalus Was the Dad of a Dipterist + * UPDATE * 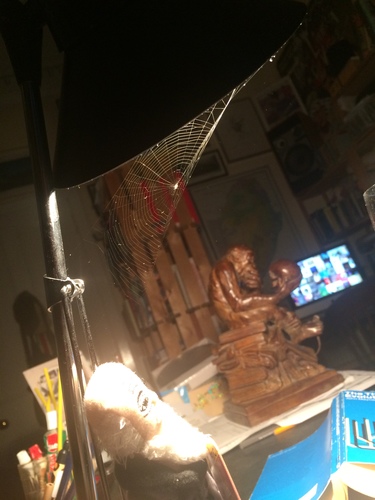 Well, it's all excitement here in Naturalist Villas. This week, Charlie D., Hugo and I have been joined by a pet spider. He's a bit of a daredevil as you can see, but we’re hoping he’s made the right choice. Life is a trade-off of risks, as Charlie D. is wont to remind me. Hugo merely shrugs and sighs, and continues to ponder Yorick’s mortality. We’re a bit worried about her. She may not have forgiven me for naming her after a man, but I explained Hugo made a wonderful girl’s name, and parents of one in 311,716 girls would agree. When she told me it meant “son of Zeus”, I had to admit to being a bit embarrassed, but she didn’t have to throw stuff when I offered a few alternatives. Especially not that “stuff”. I mean, what’s wrong with, Hughina or Ugolina, anyway? Although, I do feel sorry for that girl who was named after me, when it turned out she wasn’t a boy. Juliana, or Roberta and Timotei, somehow don’t work quite as well. Anyway, risks. Icarus, that’s what we’ve called our 8-legged friend, has pitched his web in the perfect place, for catching midgies and moths and other photophilics, but it might be a bit short-lived. 60W bulb and that. So far he’s only caught fluff-n-dust and wine fumes, but fortune may turn his way. It’s rarely possible to forecast how things are going to turn out. Fortunately, our brains have evolved to be pretty awesome at evaluating risks, and revising our estimates dynamically with nano-nuggets of new information, harvested by our combine of combined senses. That's how we can make better decisions from experience. It works in nature too. I once reviewed a paper based on a chap's life long work; decades of studying the effect of cars on butterfly navigation. It was something to do with the biodiversity conservation of our hedgerows. Very important too. So, pretty big finding for this fellow, that once a butterfly has been hit by a car when trying to cross the road, it very rarely tries to do it again. Fascinating stuff I hear you say, science eh? But enough of this lepidopteran logorrhea. Allow me to draw you back to the hairy-kneed hunk here: what about little Icarus then? Will he learn from this experience? One thing perhaps he should modify in his design, is not to attach the corners of his web to moveable objects. That lower strand of silk is right in the middle of Charlie’s forehead. He daren’t move for deflecting the natural course of existence, setting off a tidal wave of consequence that could end up with a couple of spolt-brat lunatics running the World. Tsk, that Charlie, he’s always talking in hypotheticals. Right, must fly, although I shouldn't use that w…. Oops, Icarus just glanced over with a half dozen of his eyes. See ya! 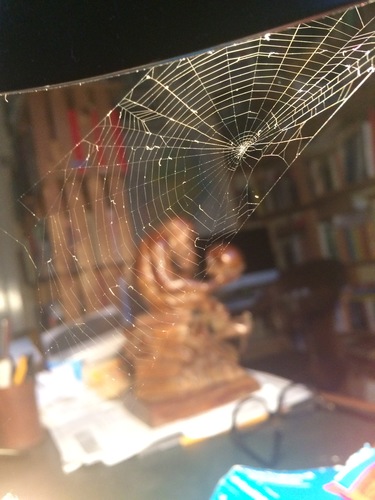 Either Icarus has a double (I assume Bicarus) or he's escaped arachnid annihilation. In addition to that stranded thread to Charlie D’s forehead, another silken tightrope has magically appeared, from web to, …… Hugy-Anne (we’re trying out a few names to see which one fits). Did Icarus manage to cheat death? Can Charlie D. finally move (his bladder is beyond selection pressure), should I get on with finishing this book? When did Trump have the lobotomy? Are the French awesome for keeping out Le Pen, or what? These, and other answers, maybe, soon.

Julian, Charlie D., Hugolia and Icarus, not so RIP after all
Edinburgh 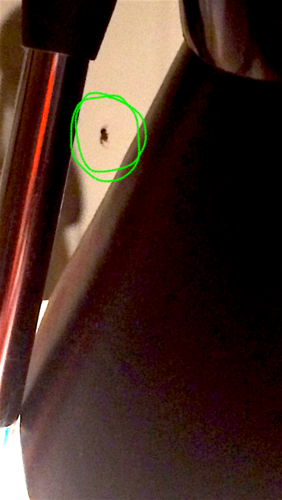 Excellent news! Icarus is well and truly back, reinstalled on the lamp, and hanging out awaiting some juicy morsel. I'm tempted to hang a burger or half-pound steak off his web; he's not catching much, except the breeze from convection currents generated by bulb heat. That’s probably why he’s taken up sentry duty, round the corner and up above the lamp shade. Considerably cooler than where he was before, but still with all the advantages of using the light as a prey magnet. He just needs a flock of moths, or whatever their collective noun. A ball? Problem, for Icarus, is that we don’t really have any moths, but I haven’t the heart to tell him. We’re confident that he’ll catch something soon with such prime spider real estate. Something more nutritious than the huffing of Hugobeth, and whimpering from Charlie D. who says he’d cross his legs, if he had any. It’s a hard life being a finger puppet, even if you have written the most important book in human history. Speaking of which, back to it!