Competition Answer: our latest contributor to the book is SIR DAVID ATTENBOROUGH

thanks to all of you who entered the competition (some quick stats: 17% of supporters visited the page, and of those people, 10% entered the competition). So, because there's none too many entrants, and they were all correct in identifying that the latest contributor to the DISSENT OF MAN is indeed the legendary, 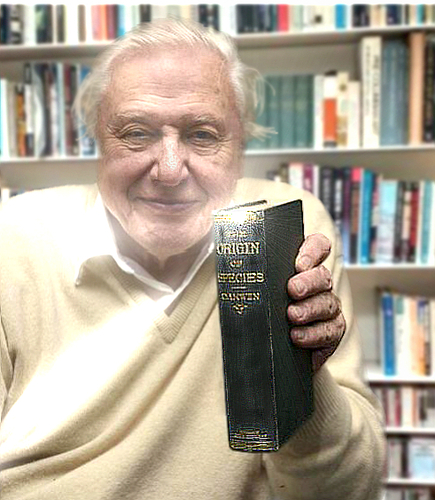 here modelling a certain book for us. Rather handsomely, it has to be said. I'll get around to announcing the winner by the end of this post, so read on.

I had originally written to Sir David to ask him if he wanted to be involved with this project back in October 2008. Being only 82 years old at the time, he declined, very politely, explaining that he had too much to do as it was, and couldn't possibly take on any more commitments.

Thinking that now he's a grand 90 years young, I thought perhaps he would have more time at hand, to comment on Darwin. Despite apologising again for not having enough time to do justice to one of his favourite subjects, and already busy writing his own book, nonetheless, Sir David contributed one of the most perfect soundbites that efficiently and accurately describes the essential message running the course of Darwin's lifetime of work. To do so requires an ultimate understanding of the entire subject area, and it is no surprise that there is no one better qualified.

I'm sure that I'll be quoting Sir David more than once in the DISSENT OF MAN. A particular monologue, from the programme Darwin and the Tree of Life, springs to mind, delivered from the then newly installed Darwin statue in the Natural History Museum, London (see the video attached to this post). 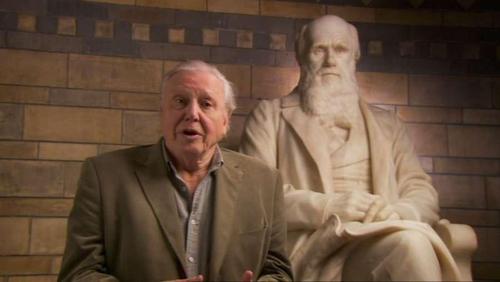 In fact, that's why I was keen to deliver my own piece to camera from the very same spot (it's the video on this project's main page). Except, I knew it wasn't going to be anywhere near as proficient and flowing, not least because of my … my … um … I forgotten what I was going to … ah, yes! My terrible short-term memory. 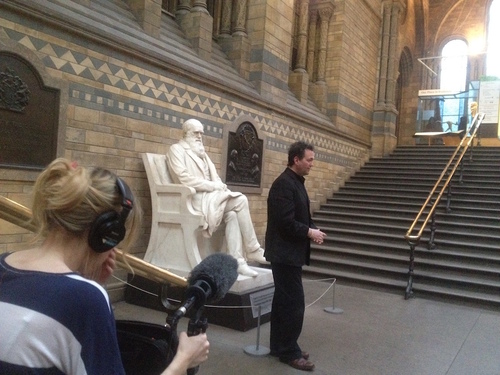 Something I will never forget though, is the thrill of making that video, standing in the footsteps of Sir David, and the shadow of Charles. And now, I am able at last to reunite them once again, this time on the pages of our book. How exciting is that? The answer is very, because from an original batch of people that I had finished listing in November 2008, Sir David was the only person whom I hadn't interviewed or received a written piece.

There is subsequent list that I am working through, which stemmed from an analytical review of the gender balance for my constributors. The male bias in academia, and particularly the natural sciences, is an unfortunate hangover from less enlightened times, and alas, still part of a wider societal, discriminatory problem. I wrote a shed post in May last year, to explain my feelings on this, and how I hope to be more equitable, Rad. Mix : Fury Road.

So, times are good for the DISSENT OF MAN. Thank you again, every single pledge has helped to get us to where we are today. There's not far to go, so please, upgrade to receive more goodies at higher levels of subscription, and try persuading others to sign up too, and don't forget to tell them that the latest constributor is a national hero and legend, and pretty much guarantees that this book is going to be something quite special. What have they got to lose?

That's right, everyone's a winner, and in keeping with that upbeat philosophy, I'm going to try emulate Sir David's gracious generosity and give everyone who entered the competition a prize. So, Paul Taylor, Paul Goodison, Steve Hoppé, Frances Tew, Julie Warren and Janet Pretty, congratulations all, and thanks for playing What's My Line?. Please take a look at the prizes below, and I'll be in touch ASAP. To avoid conflicts over the same title, I hope you agree, I'm going to take requests in the order I received your entries, which is the left-to-right sequence above. 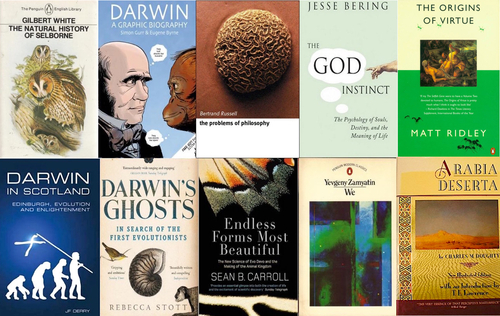 Excellent choice of action with the prizes, look forward to seeing whats available after the Paul's have their pick.