I had a day off writing yesterday, so what did I do? Went to a library and hung out with some natural history books. But it wasn't any old library, nor any old natural history books. It was the National Library on the George IV bridge, here in Edinburgh, which I'm surprised to find out isn't old at all. You assume living here that anything original-looking, comfortable in its place, well adapted to its environment, is something of appropriate antiquity, but, "The National Library of Scotland is a distinctive example of 20th century civic building, occupying a critical location on George IV Bridge. The renowned architect, Reginald Fairlie's design for the The National Library is one of Edinburgh's most prominent examples of the 'classical-modern' style, with Fairlie himself describing the buildings appearance as one of 'frigid serenity'." 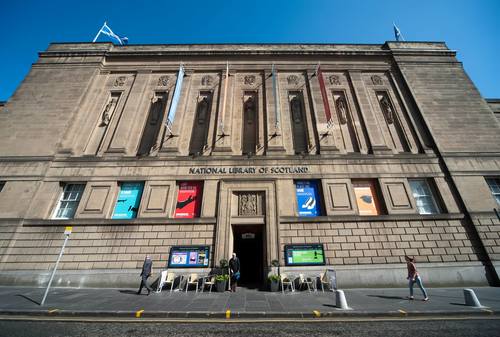 Love the "frigid serenity", although I'd add "intense intention" too. That dour, understated, “this is how it is, and this is how it will always be”, concentrated uniformitarianism of the Scots. No wonder the ever observant Auden picked out the permanence of Scotland in his “beat” poem

Analysing “The Night Mail”, the pairing of “working” and “well-set” is sometimes compared to poor versus wealthy, which is like looking at it from the Glasgow end of the stanza. Turning it around, “well-set” could refer to physicality, “strongly built”, so “working” might put muscular in mind. Aberdeen’s granite could be its “Puritan formalism”, or chiselled jawline, both set against change, matching its other meaning, “unyielding firmness or endurance” which fits in perfectly.

So, a surprisingly youthful building, but with big shoulders. That's the view from the special collections reading room, looking eastwards down the High Street (a.k.a. the Royal Mile), over the rooftops, to Arthur's Seat in Holyrood. Hutton's Section, one of the sites where he recognised upheaval and nonconformity, is about 1/3 of the photograph's width from the left.

In contrast, the old natural history books were comparatively old. One I took great joy in handling was a first edition of Charles Darwin’s “On the Origin of Species”. A first for me, and it felt good.

Does that feeling need explaining among bibliophiles? It’s just an object, but it conveys so much meaning in its contents. It’s no where near the earliest thoughts on evolution, but it’s a pivotal point passed through by time’s arrow, the exhaustive compilation of knowledge to date, and explication of its minutiae. Amazingly for something so heavily esteemed by history, it’s really quite light: and sits comfortably in the hand. One might say, it’s “well-set”. 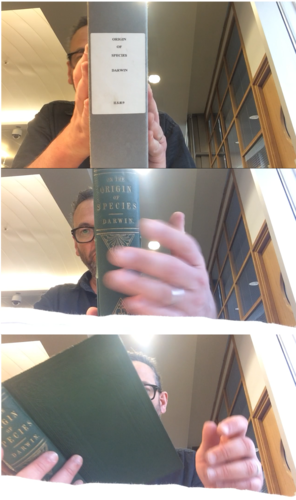 It's an amazing free facility that the library provides, and the staff are friendly, accessible experts. So, I left the building quite content with the afternoon's work -- I had gone there for more than a quick feel of "The Origin", although I was thinking at the time how easy it would be to do this like every month, or week. They might notice daily. I think there's a short story in there somewhere, about …… . Hopefully, I'll get around to writing it. One day.

Meanwhile, it was all back on the coach, stopping only for vital refreshments, "a pint of Watneys Red Barrel, packet of cheese and onion, everybody all right with cheese and onion? Course they are, and a white wine for the lady", and toilet breaks, and fish & chips, and ice cream on the pier, not forgetting the shooting gallery and a twenty-foot teddy to carry on.

Right! Back to the writing. See you soon.