Behind Every Great Man

here’s wishing you well at the opening of this, all-too-brief-and-infrequent missive for the sole purpose to provide myself a platform with which to be shamelessly boastful. Apologies in advance, but it’s either laid out here, or in front of the cats, and in opting for your good selves, I’m hoping you will neither, rip it to shreds, chew it, mark it with your secretions, nor shit on it. But, it you do have to, then please don’t go treading it into the carpet afterwards. Now, on with the braggadocio …

It's some time since being able to consider myself an academic, although the cuts are deep, and the scars still linger, plus it’s questionable whether I could have claimed truly to be an academic at any point of those twenty-or-so years. Despite my misgivings, I did manage to carry out some useful research, elucidate a small handful of previously mysterious or totally undiscovered details about the way nature works, publish more than a few well-received and still relevant journal articles, and along the way, hopefully inspire some unenthused but otherwise promising students about the wonder of the natural world, in the guise of ethology, ecology and evolution. 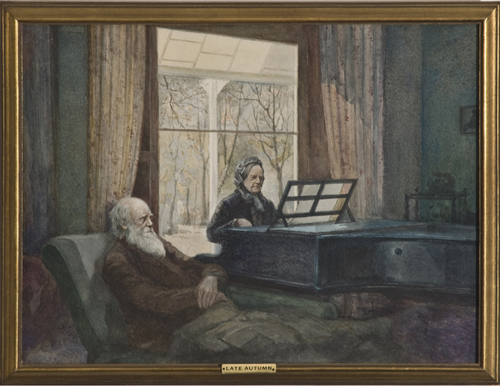 ‘‘Late Autumn’’ by the Russian artist V. Evstafieff, showing Emma Darwin at her Broadwood installed in the living room at Downe, playing to Charles.

During the course of those couple of decades, academic research, it's raison d'être, motivation, funding and resource base, mutated from a philosophical pursuit of knowledge to better comprehend the universe, into a money-hungry multi-headed beast, ready to compromise ethos and furthering humanity, in preference for profiteering and whittling out the wheat from the chaff. Sadly, more Cerberus than cerebra.

The collective experience and knowledge of many thousands of people-years were discarded because, even though notable, an old academic is always on their way out, and no longer a hotly fundable commodity. Don’t worry, this isn't a bitter revenge letter. I wasn’t forced out through ageism. I left full-time academia aged 38, in 2006, a UK-based researcher with a young family, and a specialism in the life of savanna ecosystems inconveniently located a continent away. I'd already spent a big chunk of the preceding decade away, and now our o̶̷w̶̷n̶̷ ̶̷t̶̷w̶̷o̶̷-̶̷h̶̷e̶̷a̶̷d̶̷e̶̷d̶̷ ̶̷m̶̷o̶̷n̶̷s̶̷t̶̷e̶̷r̶̷ ̶̷ two lovely daughters had arrived, it was time for me to be at home more. That, or figure out the commute from Hell. Hmm, Cerberus again.

Any legacy an academic leaves behind is their work recorded in the journal papers of the past, and the new work that it inspires, by bright-tailed and bushy-eyed researchers in the future. As I said, my contribution ad infinitum, or whenever someone repeats my measurements of feeding around African waterholes, whichever is soonest, also takes the form of several journal articles. Unable to continue in that line of research once domesticated, despite the prominence of very many watering holes in Edinburgh, they do noticeably lack impala, kudu, wildebeest, zebra, eland, giraffe, rhino, elephant, as well as crocodiles, hyenas and lions. Instead they are favoured by the thirsty Edinbourgeois rendering them far more wild and dangerous on a Saturday night, and in fact at most other times.

Faced with no longer having an office under the stars due to a very real likelihood of frostbite, and no stars, not really, not like African skies, aaah…, oh, and not wishing to end my days in a pool of Deuchars spittle, I needed to redirect my attention to something I could pursue when not changing nappies, concocting precision formulations as a penance for the inability to lactate, playing with coloured wooden blocks, watching Teletubbies repeats, or screaming into a pillow while the babies slept off one of their incessant feeds that seemed to come round with the reoccurring frequency of a goldfish on Bennies.

The last piece of research I had done had looked at the intriguing possibility that dry areas extended across Africa for many thousands of years around the time of the Pliocene-Pleistocene transition (5.3 million- to 10 thousand-years-ago). Animals obviously did survive this period, and indeed flourished into the modern forms of large African mammals that we see today.

Putting all the data together with the common understanding that new species of plants and animals result from the accumulation of random genetic changes within populations isolated from breeding with other populations. Any changes accumulated that improve chances for survival and mating get passed on to the next generation. Those changes have been said to have been preserved, by the non-random filtering activity Charles Darwin called natural selection.

It is so beautifully simple an idea. Like rolling a dice, with no concept that there is a number needed or what the consequences are, or indeed how the dice even really works. Life, eh? And ruddy Monopoly.

However, the Devil and his dog is in the detail, and a major area needing clarification arises out of the complexity underlying the conditions under which populations are isolated, or sufficiently separated, and gene flow between them, aka, shagging, is either not possible, or insignificant for spreading any preserved changes. Because, if the changes that make a difference then get spread throughout the species, you're back to square one. Oh, bloody hell, now it's Snakes & Ladders!

Any novel ways in which isolation can occur is of interest. One of the most obvious was noted early on. Chas / Bob Darwin himself already recognised that water can intrude into areas, reshaping lands and creating islands. What hadn't been suggested is that water can also withdraw, that is, the water distributed as temporary waterholes and more permanent pans, river systems, lakes, etc, dry with climatic temperature increases.

This is what likely happened during the late Pliocene, removing a stepping-stone network of those places for rehydration and respite that allowed large-scale migrations and ultimately mixing of populations. And when populations mix, there's always shagging. Even in Edinburgh on a Saturday night. Unlike shagging in Edinburgh, this situation was probably sustained over evolutionary time, that is longer than a quickie up against the alley wall, and more like an epoch, or two.

But that's not actually what I wanted to tell you about. Sorry, got sidetracked. Went off on one. What I wanted to tell you is that I found I had some writing that I could busy myself with, between all the magic of baby days. The subject was a natural extension from thinking about Darwinian evolution in ancient Africa. Well, sort of, because I started to write about Darwin himself, his time spent in Edinburgh and elsewhere in Scotland, the importance of those stays in relation to informing his ideas, and then through natural progression, and via getting a little involved with the UNESCO World Heritage Site bid for Down House, which they sadly didn't get, his time spent therein too.

Which does, at last bring me onto why we are gathered here today … it's some time since being able to consider myself an academic, but every so often I receive an email bizarrely telling me how well my papers are doing against the competition. I didn’t know it was a race.

In spite of my ignorance, and probably because of it, one paper that I’m pretty proud of, doesn’t shatter any Earth’s, and is about as decisive on matters evolutionary as choosing WordArt to sex up a poster for the village fête; but evidently has proven very popular, as far as academic papers can be celebrity, meaning that I have been winning solidly year-on-year, since it was published, for the last 6 years. What’s more, it isn’t really about Charles Darwin at all, the focus being more on his stoic wife Emma.

Here’s a copy of the paper if you’d like to take a look - it’s linked to the title, at the top of the following list of me and 19 losers. Mine is listed under number 1, where the best paper is placed. You can't miss it. it's the line with no titles of competing articles listed above it. It's numero uno, No. 1, the big cheese, le grande camembert , il fantastico formaggio, el queso grande, die groot kaas, الجبن كبير, e kholo e chisi, 大物, بگ پنیر, үлкен ірімшік, iso juusto, der große Käse, 大奶酪, stór ostur, babban cuku, den store ost …

Oh,… and today’s title? Because, as the saying goes, “Behind every great man, is a woman, rolling her eyes.”

8. [The discussion about the application and impact of music on depressive diseases throughout history and at present].
Heise S, Steinberg H, Himmerich H.
Fortschr Neurol Psychiatr; 2013 Aug;81(8):426-36.

14. [The phenomenon of pain in the history of music – observations of neurobiological mechanisms of pain and its expressions in western music].
Gasenzer ER, Neugebauer EA.
Dtsch Med Wochenschr; 2014 Dec;139(51-52):2642-50.