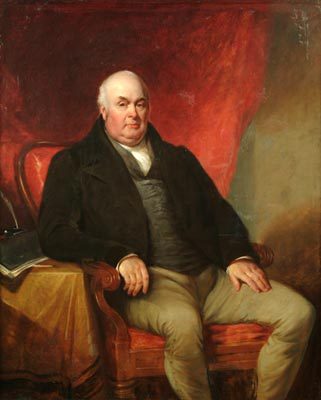 When shall I be dead and rid
Of the wrong my father did?
How long, how long, till spade and hearse
Put to sleep my mother's curse?

(from A Shropshire Lad by A. E. Housman)

Still on the subject of fathers, following the previous post on Fathers' Day in the UK, here's Darwin's Dad, although I doubt he ever called him anything so informal.

Dr Robert Waring Darwin, F.R.S. (30 May 1766 – 13 November 1848) was a member of the influential Darwin-Wedgwood family, who today is best known as the father of Charles Robert Darwin. To Darwin senior this was probably more burden than blessing, his son's early failings weighing heavily upon the father's high hopes for continuation of the family reputation.

You care for nothing but shooting, dogs, and rat-catching and you will be a disgrace to yourself and all your family!

In his day Robert was a renowned medical doctor, although not to the same degree as his father Erasmus Darwin, Charles' grandfather. Even so, both Erasmus and son were elected to the Royal Society while still audaciously young (aged 30 and 22, respectively) which must have seemed an impossibly high standard to meet for young Charles. Despite his lack of early academic promise, Darwin did make good and was also received into the Royal Society, also aged 30. Amazingly this family tradition would be kept going by three out of six of his own sons: Francis (when 34), George (also when 34) and Horace (when 52). Another family tradition beginning with Erasmus was attendance at the University of Edinburgh to take medicine. Erm, study medicine that is, rather than begin a course of …, ah. An interesting semantic cul-de-sac.

Anyway, anyone pursuing a career in medicine was wise to go to Edinburgh, as since the mid-18th century it had been the best medical school. Oxford and Cambridge could give you academic teaching, but only if you were an Anglican, and they had no hospitals. London had no shortage of hospitals, but they had no university at that stage. Edinburgh had both a hospital and a university, allowing the parallel teaching of both theory and practice not afforded by anywhere else at the time. And this is the simple reason why both Darwin’s grandfather and father had received their medical training at the University of Edinburgh – grandfather Erasmus (1731–1802) in 1755 (aged 22) and father Robert (1766–1848) in 1786 (aged 20) – both forging family ties and friendships while they did. One Darwin never managed to leave: Darwin’s uncle, another Charles Darwin (1758–1778), died from meningococcal meningitis, contracted during a post-mortem, while studying in Edinburgh. He was buried in the Duncan family vault in the St Cuthbert’s Church overflow site, located at the junction of Buccleuch Street and Chapel Street in Edinburgh.

Of his own generation, Charles' older brother Erasmus Alvey Darwin persisted with medicine until he was 26 when he was forced into retirement to pursue instead a gentle life of literature and culture and dinner parties. This sounds idyllic given the family's wealth, but it must have come with a price to his mental health. Father Robert had decided on his behalf that Erasmus would not be able to take the strain were he to become a successful medician, as he himself had, following in the footsteps of his father, Erasmus' namesake.

As for Erasmus, who had every mental qualification, his father told me that he must not attempt, with his delicate frame, a career like his own, involving, if succesful, a severe strain upon body & mind. 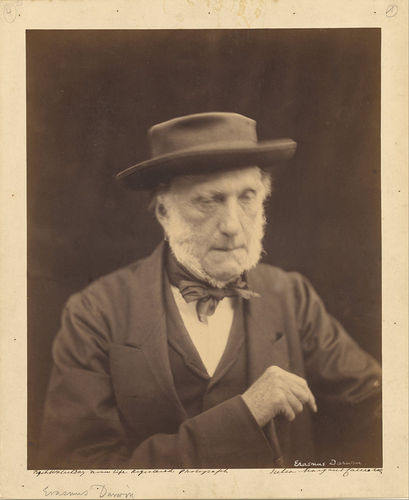 How this patriarchal subjugation impacted the intelligent and sensitive Erasmus, it's not clear, but we know what the psychological damage can be of an overbearing parent authority figure who substitutes control and belittlement for encouragement and love, even if they think they are acting in the best interests of their child,

Child rearing has three important goals, the protection of the child's right to experience a childhood, the enjoyment by the parent of the wonders of this unique human relationship and the protection of the child's natural development into an autonomous adult.  Each of these three requires that the behaviors, attitudes and beliefs of the child be influenced in deliberate ways by parental actions. … every person … needs to feel autonomous, competent and related to others. Control oriented parenting interferes with the fulfillment of these needs. Parents are either controlling or autonomy supportive through the environments that they create for their child. An environment is controlling to the degree that children do not, "… feel that they initiate their actions …" and do feel coerced, as if they have no choice, as if their behavior is initiated from without. In an autonomy supportive environment a child can perceive himself or herself as the locus of causality (what some philosophers call "agent causality").

In contrast to events having identifiable causes, in the simplest terms, agent causality appears to the agent as if events occur spontaneously or by chance. Therefore, if an individual is denied the determinism and responsibility of one's own actions, there is a level of disassociation from consequence bred within, an unhealthy pathological disinterest in society which may be expressed as extreme disobedience, antisocial behaviour, and criminal acts. No crime is victimless, and the sociopath doesn't give a damn.

If we are looking for clues in Erasmus' behaviour, then a few years after he took involuntarily retirement, it became an open secret in the family that he was having an affair with his cousin's wife,

Erasmus has been very gay at Parties at Lady Giffords & the Hensleighs &tc. he has not written very lately. Mrs. Hensleigh is to be confined the beginning of next month so I suppose he can not be junkitting at her house now.

Even after this enforced separation and after Hensleigh and Fanny Wedgwood had a baby, still Erasmus persisted. Desperate to avert a scandal breaking in the newspapers, Robert tried to assuage his son's ardour by matching him with Fanny's sister-in-law, Emma Wedgwood, the future wife of his brother. It's no wonder that Charles Darwin was concerned about inbreeding within his family. Perhaps as an indication of this, Both Erasmus senior and Charles had large families but lost several children to infant mortality. Furthermmore, the other Charles Darwin succumbed to a fatal infection in Edinburgh while another uncle, Erasmus Darwin II, a successful solicitor likely took his own life by drowning in the River Derwent, although this may have been an accidental death following heavy rains. 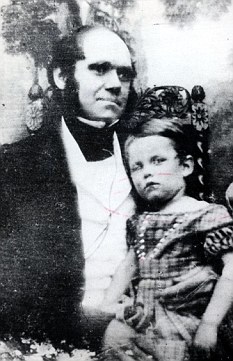 Charles may have been the lucky one. He was frequently the target of his father's wrath, chastised for poor academic performances at his school in Shrewsbury and at Medical College in Edinburgh, although he did learn scientific philosophy and method, plus a few other useful skills such as taxidermy while there, and these would prove far more useful to him in the long run. Father Robert even wished to dictate his every movement on the return journey when Charles had been ordered home, but by then he had spent more of his youth away from Robert's reach than his less fortunate siblings. A short time later, he would find himself boarding the Beagle having enlisted the help of uncle Josiah Wedgwood II, in persuading his father of the benefits of a protracted maritime adventure. By the time he returned to Britain, five years wiser and already acclaimed for his geological work, there was a demand for him to in the scientific circles with which he had been in close correspondence throughout the voyage. Subsequently, he spent only one more year living at the family home in Shropshire, most of which was spent writing papers, before moving to London, marrying, and settling at Downe, from whence he rarely strayed.

This Be The Verse by Philip Larkin

They fuck you up, your mum and dad.
They may not mean to, but they do.
They fill you with the faults they had
And add some extra, just for you.

But they were fucked up in their turn
By fools in old-style hats and coats,
Who half the time were soppy-stern
And half at one another’s throats.

Man hands on misery to man.
It deepens like a coastal shelf.
Get out as early as you can,
And don’t have any kids yourself.

Larkin's genealogical generalisation may have applied to his childhood, and no doubt does to many more, even to the sons of Robert Darwin. However, Charles seems to have broken the chain. From the accounts of his children, he was a good Dad. He and Emma had ten children, but two died in infancy, and Annie died aged ten. 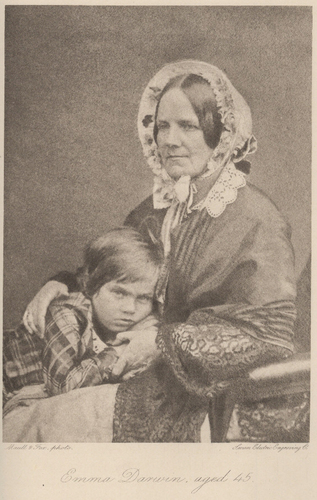 Six boys and three girls survived, but only three of them went on to become parents themselves. Hopefully those few carried forward some of the positive parenting skills that their parents possessed: Emma was a sensitive and considerate, overseeing the running of the house and the children's education, not least in music for which she could employ her excellent piano playing. Charles was patient and attentive, playful when his health allowed him to be, and forgiving of interruptions to his work schedule, instructing how to use the aparatus in his study. He famously involved a couple of the older siblings in his research. Importantly, the children grew up in a mutually respectful and loving home, based around a strong partnership despite their parents' spiritual incompatability (Emma was a devout Christian). Most apparent from the first hand accounts of this upbringing, is that within the loose framework of a lively household, the children were provided with that vital trio of requirements, autonomy, confidence and attachment. Interestingly, attachment has been implicated in the causation of another parental authority, one who is loving on the one hand, but sin against them, and you will feel their wrath. But we'll have to leave that for further exposition in The DISSENT OF MAN. Just pledge if you want to hear more. Meanwhile, we'll have to be satisfied with Our Father Who Art In … Shropshire.