Well, despite the publication date being shown on this site as 'TBC', I can reveal that the date you want is July 11th.

The final edit has been signed off - now there's only typesetting and proofreading to go. The cover is being painted by Neil Gower and I've seen the sketches for it; it'll look fantastic side by side with A Murder To Die For .

And the free e-book of short stories that all pledgers will get is just about ready to go.

Climate change is very much in the news at the moment thanks to the school strike protests, and that can only be a good thing. As it happens, there's a strong environmentalist message within The Diabolical Club which features, as a sub-plot, the somewhat chaotic attempts of an animal rights group to stop a local pond being drained due to the subsequent loss of habitat for a rare duck (and other species). This may be a comedy but the message about habitat destruction is a serious one.

I was therefore delighted when a pledger, who paid for the frontispiece of the book, chose not to have a dedication to herself or for her loved ones, but instead asked that we include this quote from Sir David Attenborough:

'The only way to save a rhinoceros is to save the environment in which it lives. Because there’s a mutual dependency between it and millions of other species.’

I was so impressed with this that I did a slight re-write of the book's epilogue and decided to draw an original cartoon to accompany the quote on the frontispiece (There are times in the book when people dress up in animal costumes). I then sent the original art to the pledger.*** 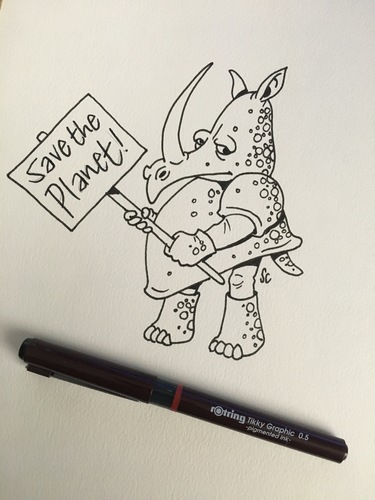 You won't get this outside of Unbound.

***This image has special significance for me too because it was a rhino suit that led me to where I am today - in a roundabout sort of way. You see, way back in the late1990s, I did some cartoons - as a favour to a friend - of a man in a rhino suit. That's because the friend in question was going to raise money for the 'Save The Rhino' campaign by climbing Mount Kilimanjaro in a rhino costume. Now, because of this, I got invited to a number of events where I was lucky enough to meet the late, great Douglas Adams, who was a patron of the charity. I got my copy of his amazing book 'Last Chance To See' signed by him and had just got to the stage where he recognised me ... when he tragically died. And, as the result of being invited to several events commemorating his life, I got to meet John Lloyd and Stephen Fry and got a chance to work for QI. And it all started with an act of kindness and a desire to do something for the environment.