I'm a fan of Jessica Fletcher and I don't mind admitting it. I've seen every episode of Murder She Wrote several times (including the four TV movies) and I love it. It's cosy, silly nonsense. Pure entertainment.

The shows are constantly on repeat on TV and, just recently, one of the ITV channels has started showing the later series; you can tell that they're later because the opening titles feature Angela Lansbury using a PC rather than a typewriter. We also get a glimpse of her writing. And, frankly, for a bestselling author, it isn't that great ...

Back in her typewriter days, all we ever got from the titles was a fleeting glimpse of the enigmatic sentence 'Arnold raced out of the door ...' but now, in the computer age, we get to see much more. Here's a photo I took on my TV (click on it to make it larger): 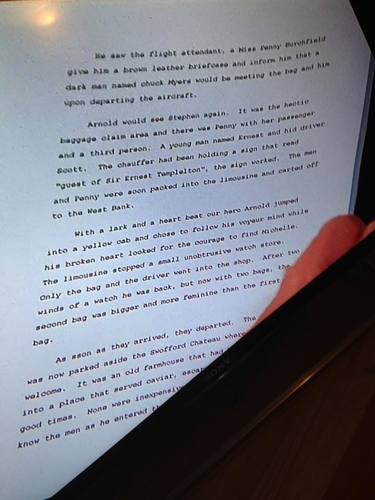 'Meeting the bag and him upon arrival'?

'As sson (sic) as they arrived they departed'?

'With a lark and a heart beat our hero Arnold jumped into a yellow cab and chose to follow his voyeur mind while his broken heart looked for the courage to find Michelle''??

It's terrible! All I can say is that J B Fletcher must have had bloody good editors. And who is 'our hero Arnold' anyway. Is he the same Arnold who raced out of the door? Could he be the Inspector Jellicoe mentioned in the TV series as Fletcher's fictional detective?

We may never know.

Still, if someone writes this badly and becomes a bestselling author, it proves that there's hope for us all!

Don't forget that you can vote for A Murder To Die For in the Dead Good Readers' Awards - in the appropriately-named 'Cabot Cove Award') until the 18th July! Click here.