Another Festival ... Another Murder!

'The great crime fiction author, Agnes Crabbe, was born in Nasely in South Herewardshire on the eighth of May 1895. Which is why, on or around the date of her birth every year, hundreds of her most devoted fans descend upon the little village to enjoy a weekend of readings, competitions, screenings, dramatic re-enactments, historical tours and talks by Crabbe scholars and other eminent people. From what started out as little more than a local book club, Nasely’s annual Agnes Crabbe Murder-Mystery Festival has quickly grown to become one of the most popular literary festivals in Great Britain.' - taken from the intro by Colin Tossel (Nasely Historical Society) to the 2015 Agnes Crabbe Murder-Mystery Festival Brochure.

If Agnes Crabbe had been a real person, and Nasely a real village, it would be full of crowds this weekend. Because this weekend is when the 2018 festival would have been held. And didn't they have the weather for it this year?

Of course, the 2016 festival was marred by a murder taking place at a prominent location. So I thought it might be fun to have another one. Here's a scenario, adapted from one in a Family Fun book from the 1950s. See how you get on ... and I'll post the solution in a day or two. Do feel free, in the meantime, to post your solutions as comments!

Meanwhile, please do pledge on The Diabolical Club if you haven't already and, if you haven't left a review of A Murder To Die For on Amazon or Goodreads, do that too!

THE CORPSE IN THE CAR

The heavy rain, which had persisted for nearly two hours, suddenly ceased at noon and the sun broke through. Two ramblers emerged from the shelter of the trees and strode off towards Nasely. At around 2.30pm they found a car parked by the side of the road and stopped to ask for directions. What they found became known as the Corpse in the Car Mystery. 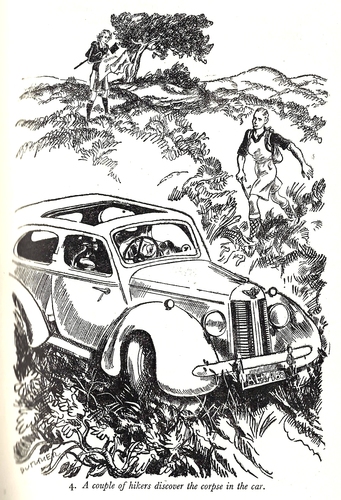 Inspector McNabb arrived at the scene and was assured by Constable Stubbins that nothing had been touched. He was accompanied by the police surgeon. Slumped in the driver's seat of the car was a middle-aged man, his face fixed in an expression of absolute agony. On the floor of the car, close to the pedals, lay a small bottle labelled 'Strychnine'. Later examination would show that the only fingerprints on the bottle belonged to the driver. There was also a cigarette stub in the middle of the passenger seat along with a hand-written note that said, 'Since my wife's death life has become intolerable and I am taking a quick way out - John Owen'. 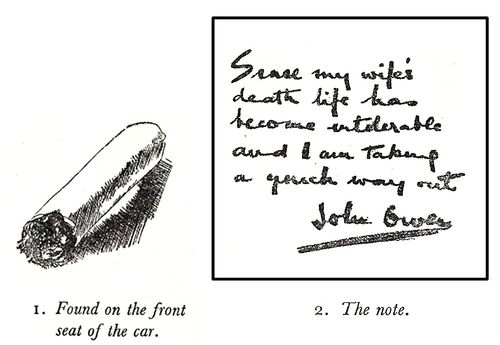 The police surgeon examined the body and pronounced death by strychnine poisoning, the death having occured between 10am and 11am that morning.

'Who discovered the body?' asked the surgeon.

'A couple of ramblers,' said Inspector McNabb. 'So, what's your opinion, Doctor? Suicide or murder?'

'I'd say suicide,' said the doctor.

'Would you now,' said the Inspector. He re-examined the cigarette stub and compared it with one that was inside a packet found in the victim's pocket. The two cigarettes matched. 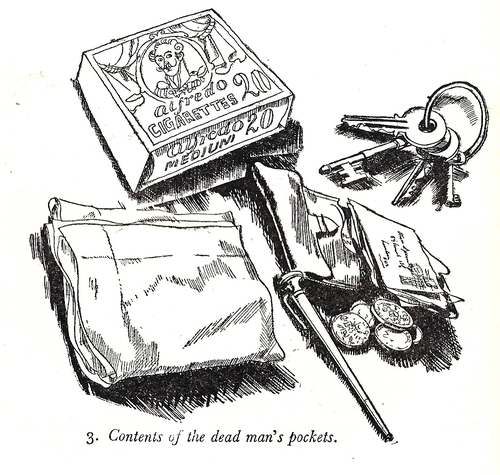 'I'm afraid you're wrong Doctor.' said McNabb. 'This is murder!'

Can YOU figure out why?

No lighter or matches, meaning there must have been someone else there?

The sunroof is open, but the cigarette stub is dry. It rained continuously during the stated window for time of death. Either someone opened the roof later or drove the car there with the body in it. I think it was the Famous Five. Never did trust them. The deceased also seems to have a modern one pound coin in his change, which is odd.

the man in the car has no matches nor a lighter - the sunroof is open, but the stub and note are dry which indicates a second party who has absconded probably drive the car there after the rain had finished. The dead man has a letter in his pocket which appears to be open I suspect the note has been forged using the letter and pocket pencil

You're all too good at this! The original 1950's solution also included this note: 'The note found on the eat was not written by the ded man. Study the note again. As you can see, it was written using a thick-leaded pencil. The only pencil found in the man's pockets was an ordinary thin-leaded propelling pencil.' Because, of course, everyone carried a pencil back then.