A hilarious, furious & absolutely true comedy about the most hapless government since the last one

Settle in, imbibe whatever sedative or chemical agent does the trick for you, and let’s rewind the clock to those halcyon days of May 2010, when we all still thought things couldn’t get any worse. Remember how that felt? Me neither, but honestly, there was a time when we still thought ‘rock-bottom’ was the shambolic, incoherent, and unrepresentative back-room scramble to assemble a working government whilst the global economy collapsed around us. “This is it”, we said. “This is as bad as it will ever get”.

Oh, to be that naïve again.

After 13 years of Labour rule, Britain’s voters had grown tired of looking at the miserable face of Gordon Brown and decided to replace him with a more even distribution of misery. Actually, to be fair, the nation decided nothing of the kind: we were offered a choice between a deflated scrotum, a polished turd, and an innocuous, grinning tea-boy from the HR department, who could promise anything he wanted, because he knew nobody would give him power. And then we accidentally made him Deputy Prime Minister.

Because don’t forget, it was all an accident. Think back to May 2010, the last recorded sensible decision the British electorate ever made: we looked at the choices presented to us, and picked nobody at all. But apparently – and right now, you really have to question this statement – but apparently, we’d be in real trouble if we didn’t have a government; and that’s how David Cameron, a sort of irritated glans in a shiny suit, became the sixth person since the war to start the job of Prime Minister after not winning a general election; but by no means the last.

After a meet-cute with Nick Clegg in the Rose Garden of 10 Downing Street that was as homoerotic as it was possible to be, given that each of them was little more than a life-size model of C3PO carved out of luncheon meat, the new sort-of-government set about its project. Clegg would make sure everybody in Cabinet had enough biscuits, and destroy his party for a generation; Cameron would watch as much Netflix as humanly possible and walk tersely off camera after every question; and in the background, his pet sadist, George Osborne, would drag the unsuspecting country into a pub car park, and kick the bejesus out of us.

Osborne was the political heavyweight of the outfit, having benefitted from the experience of two – count them, two – jobs prior to sitting in government. In his first role, he was a part-time data-entry clerk, responsible for filing the names of dead people at an NHS morgue. In his second job, he folded towels at Selfridges’ store.

His third job was MP and Chancellor of the Exchequer. And I’m sure, with a CV like that, we can all agree he richly deserved it.

But being in charge is such a bother, and it wasn’t even ameliorated by the opportunity to claim almost £100,000 in expenses for the paddock at George’s Cheshire home – because we all know it’s impossible to be Chancellor without having access to a small dedicated team of horses. I guess we should be grateful he didn’t claim money to install stables in the flat above 11 Downing Street. Meanwhile, Dave was also having a trying time of it: not only had he almost run out of libraries to close, but he was also having his chillax time either un-chilled or axed completely by a rabid toad named Nigel Farage, who kept yawping on about bloody “forriners” being to blame for everything.

But because the things Nigel said were so stupefyingly awful, slack-jawed TV execs kept on pointing cameras at him: and so, the idea spread.

Making all this unpleasantness go away would mean Dave delaying his ninth episode of Made In Chelsea that day. So, to avoid having to leave his sofa long enough to be mildly stern with a dozen zealots on his backbench, he decided to just call a hazy referendum on whether reality was reality. And then he decided not to bother campaigning.

In December 2015, before David Cameron lazily handed control of our fate to these maniacs, only one per cent of Britons felt our relationship with Europe was the most important issue facing the nation: by 2016 this had increased to 40 per cent, and then to 72 per cent by the time Theresa May left office.

But the Tories were determined to deliver Brexit through thick or thin (roles perfectly performed by Mark Francois and Jacob Rees-Mogg). As a result, we are where we are: Dave resides in a solid gold shed, attempting to finish the whole of Amazon Prime; Nick Clegg went off to Facebook, to deploy all the skills that had made the LibDems the powerhouse they aren’t today; George got given a newspaper to play with; and the 0.4 per cent of the population that paid money to become a member of the Tory party got to pick a new Prime Minister, because that’s how you do it in a democracy, it seems.

After a brief, messy experiment in being led by Theresa May, a woman with all the warmth and grace of a Meccano scorpion, we placed the keys to Britain in the hands of a thermonuclear tribunal-magnet named Boris Johnson.

Let us consider for a moment Boris, a moral man, and a fine politician: I’d love to talk about all three of them, but I only have space for Boris.

Johnson may well be second only to Donald Trump as the biggest, most relentless elected liar in the world, and has a decades-long record of racism, sexism, homophobia, islamophobia, xenophobia, amorality, ineptitude, and deception. He owes his success almost entirely to being able to persuade people he’s a fun, clever and educated scholar, hiding inside the bloated corpse of Billy Bunter; but he’s actually a narcissistic, bullshitting nincompoop who went on Have I Got News For You and was unable to correctly answer the question, “What is your name?”.

In a more rational world, David Cameron would have remained where he started: the PR guy for local daytime TV channel. Theresa May would be the deputy head of a primary school in Special Measures. Nigel Farage would be a shift-manager at a branch of Wetherspoons in Penge; and Boris Johnson would be children’s entertainer on administrative leave pending the outcome of a serious enquiry.

But we aren’t in a rational world: we’re in a world where the rules no longer apply. The last decade has been indistinguishable from a rollercoaster drawn by MC Escher, composed entirely of nauseating descents. Meanwhile the nation has heaved a weary sigh of relief at the demise of each iteration of their pointless, ghastly ministers, only to watch each one replaced by something even worse.

We had to put up with Michael Gove, a fantastically crepuscular backstabbing vowel-strangler, who was once considered a moderate because he begrudgingly conceded that burying the planet under discarded Tesco bags might hit profits.

Then there’s Priti Patel, Home Secretary and off-duty Dementor, who literally had to be reminded not to giggle on live TV whilst delivering news that she was going to ruin your children’s futures. People wonder how morbid egg Iain Duncan Smith sleeps at night, but I’ve done the research and finally have the answer: he sleeps in a coffin full of money, floating on a lake of orphan’s tears.

The most bearable of them was, for a while, poor old Rory Stewart, a man with the bearing of somebody who phones in sick because he went out in the wind and got a runny eye. But he buggered off to fail miserably at becoming mayor of London, and left us alone with Andrea Leadsom, who appears to be an effortlessly terrible melted waxwork of Margaret Thatcher; and James Cleverley, a stunningly successful one-man campaign to disprove nominative determinism.

Chris Grayling somehow continued to be shunted from ministry to ministry, despite (or perhaps because of) being a man so dizzyingly, dazzlingly, dementedly inept that I could write an entire book about just him, except the book would probably burst into flames the moment you got it home.

Then there’s David Davis: so good they named him once. We should not overlook Robert Jenrick who, try as he might, simply couldn’t help having dinner with a pornographer who forced his staff to sing Nazi-themed abuse at rivals, and for whom Jenrick entirely coincidentally did enormous favours at the taxpayers’ expense. We are blessed to have a cabinet that includes top fireplace-salesman Gavin Williamson, who almost started a war with China to get his picture in the newspapers, after which he got – stop, please stop – promoted. Twice.

Finally, bringing up the rear in a government that seems to be comprised entirely of absolute rears, we have Matt Hancock. If you painted a number 7 on Hancock’s face, he would be physically and functionally indistinguishable from the type of spoon they use to track your order at a Harvester.

This gang of inept, soul-sucking lunatics thought the solution to a pandemic killing 1,000 Britons a day was to make us stand on our doorstep and clap nurses. If they believed what they’d been preaching for the last decade they should make us clap billionaires, and then the claps would just trickle down to NHS staff.

So there you have it: that’s the dramatis personae of the final season of the United Kingdom. But before we launch into what must surely be the inevitably disappointing feature-length grand finale, let’s cheer ourselves up with a 400 page recap of the Decade In Tory.

A set of six postcards insulting your favourite Tories, plus everything at the Collectable level. 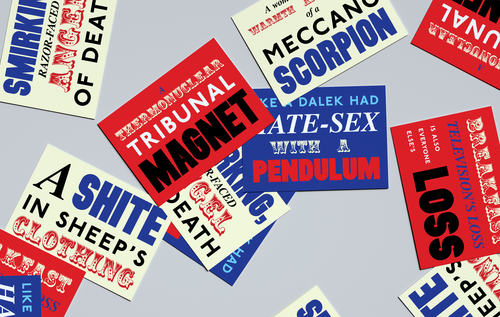 Ten signed, hardback copies, ten ebooks, up to ten names in the back of the book and a half-hour Zoom call from the author to discuss the themes of the book. 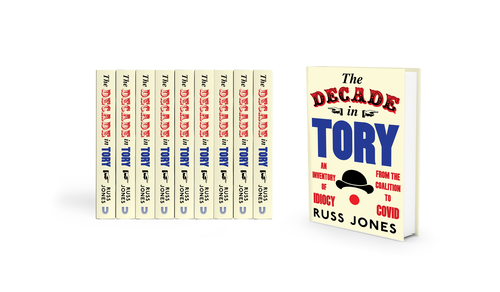