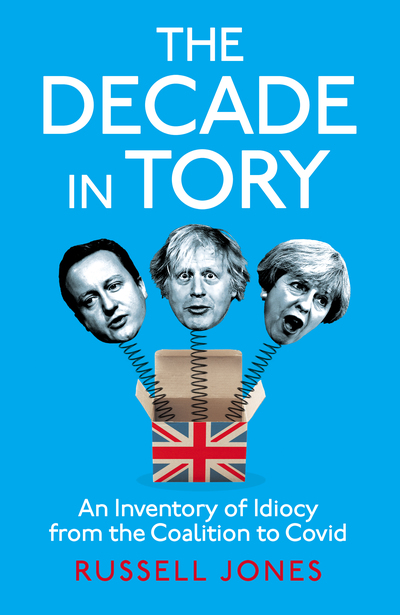 A hilarious, furious & absolutely true comedy about the most hapless government since the last one

‘Buy it for relatives who read the Daily Mail. It might work as an antidote’ Jemma Forte, broadcaster and writer

In 2020 the United Kingdom reached a bewildering milestone: ten successive years of Conservative rule. In that decade there were three prime ministers, each in turn described as the worst leader we ever had; ministerial resignations by the hundred; and an unrelenting stream of ineffectual, divisive bum-slurry oozing from 10 Downing Street.

With his signature scathing wit, Russell Jones breaks down the government’s interminable failures year by year, covering everything from David Cameron’s pledge to tackle inequality – which reduced UK life expectancy for the first time since 1841 – through the bewildering storm of lies and betrayals that led to Brexit, devastating education cuts, serial mismanagement of the NHS and Boris Johnson’s calamitous response to the Covid-19 pandemic. It will leave you gasping and wondering: can things possibly get any worse?