When Sherlock Holmes fought the Nazis 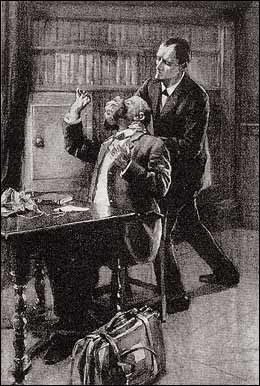 There's an east wind coming all the same, such a wind as never blew on England yet. It will be cold and bitter, Watson, and a good many of us may wither before its blast. But it's God's own wind none the less, and a cleaner, better, stronger land will lie in the sunshine when the storm has cleared.

So says Sherlock Holmes at the end of 'The Last Bow', the story in which Conan Doyle brought his detective out of retirement to strike a blow for England against the German Empire. It was published in the September 1917 issue of Strand Magazine, but set just before the war. We must imagine that Holmes and Watson are about 60, but still sprightly.

These words also appear 25 years later at the end of Sherlock Holmes and the Voice of Terror, the first of Universal Pictures' series of Sherlock Holmes films starring Basil Rathbone and Nigel Bruce. Made in the aftermath of the US declaration of war on Germany, Universal decided against making the sort of lush period pieces that Rathbone and Bruce had made for Twentieth Century Fox (The Hound of the Baskervilles and The Adventures of Sherlock Holmes, both in 1939), and decided instead to make a series of cheap first features with a contemporary setting. And, for the first three of them, they would make him fight Nazis... 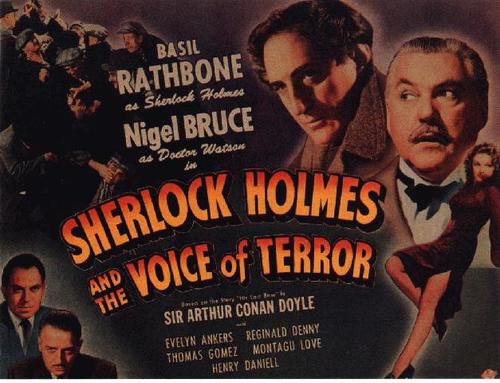 Beyond the last speech from Holmes, and the villain's name (Von Bork), there is little resemblance between Sherlock Holmes and the Voice of Terror and 'His Last Bow'. A bigger influence is the wartime activities of William Joyce, who along with others broadcast Nazi propaganda to Britain from Berlin. His affected tones earned him the nickname Lord Haw-Haw. Of course, the film itself is a piece of morale-boosting propaganda, aimed at an American public that might still harbour doubts about sending its sons to a conflict so far away. It's hard to believe that the British government would be happy with the film, given how successfully the villain is shown to infiltrate the establishment (as ever, no spoilers here, even for a film that's 75-years-old). Nevertheless, this movie set the pattern for the Holmes vs Nazis adventures that followed.

The next two entries in the series see Holmes travel abroad, though not to the front. The Secret Weapon (1942) opens in Switzerland - an important location in Holmesian lore, of course - but the detective is soon back in Baker Street. The struggle to keep from the Gestapo a dissident scientist and the secret to his ingenious bombsight is complicated by the involvement of Holmes's nemesis, Professor Moriarty (Lionel Atwill). There is no Moriarty in the next feature, Sherlock Holmes in Washington, but there is George Zucco, who for my money is the best of all Rathbone's Moriarties (in The Adventures of Sherlock Holmes, three years earlier). Here, he plays Nazi spy Henrik Hinkel - but his casting seems to complete the identification between the Victorian network of criminals that Doyle imagined and that other web of villainy, the Nazi party.

I saw these films - along with those that followed, which mostly eschewed mention of the war - in waves throughout my childhood. By the time they were being repeated at teatime on BBC2 in the early 80s, I had become a committed Sherlockian, and was appalled by them. Cheap, crude, preposterously plotted, with a fool of a Doctor Watson, and no continuity from one entry to the next. I hated that silly haircut Rathbone wore, I winced at how stupid they'd made Dennis Hoey's Inspector Lestrade - Bruce's Watson was a Mensa member by comparison - and I balked at the Bavarian horror-movie sets meant to represent modern British locations. 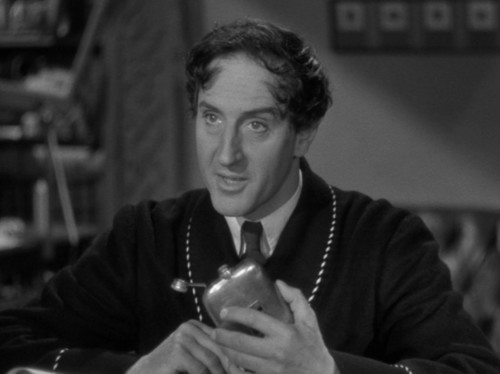 But still, I watched them. When the Granada series came along in 1984, with Jeremy Brett's actor-manager Holmes and its faithful adaptations of the stories, I became an enthusiastic devotee; but there were aspects of the Universal series I couldn't shake off. Rathbone's voice remained, and so did his physical presence, daft hairdo notwithstanding. Graham Greene, reviewing Rathbone's performance in The Hound of the Baskervilles, noted ‘That dark knife-blade face and snapping mouth, an eager face, wearing an expression of high strung energy’. There was no denying that he was perfectly cast as Holmes.

There was also the fact that I was quite happy with the idea of Holmes fighting Nazis, even if I wasn't entirely convinced by how that idea was carried through. If there were Nazis to be fought, then that's what I thought our heroes should be doing. It put him on the same side as Indiana Jones and Captain America. More to the point, it put him on the same side as my Granddad (British Army) and Great Uncle (RAF). What I didn't appreciate then - and maybe what I'm only just beginning to appreciate now - is why the films focused on the home front, on the Nazis in our midst... In a recent interview, Mark Gatiss suggested that if he and Steven Moffat were to revive their stupendously successful Sherlock Holmes update, they might set him fighting Nazis in World War II. Now that I'm much more relaxed about what storytellers  choose to do with the Holmes mythos, I'd love to see them do that. But even more, I'd love to see Benedict Cumberbatch and Martin Freeman stay in their established contemporary setting and do what Rathbone and Bruce did. 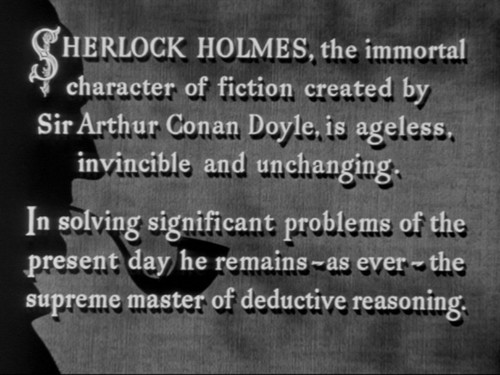