The Continuity Girl is nearly here...

Today I completed the final tweaks to the copy edit of The Continuity Girl and sent the manuscript to my copy editor, Andrew Chapman. It took tremendous self-control not to go on making changes. I once heard David Almond, the acclaimed children's writer, read from his much-loved novel Skellig, and admit afterwards that he'd edited as he'd read. The book was then over 10 years old.

All that's left for me to do now is proofread - oh, and lend a hand in the cover design. I have spent a pleasant few hours completing a design questionnaire, ahead of discussing my ideas with the designer. I've created this moodboard to help me, and perhaps to help them. Though the novel is set as much in 2014 as in 1969, I've favoured the earlier date, since it's what happens during the making of The Private Life of Sherlock Holmes that drives the plots in both timelines.

Talking of Wilder's and Diamond's late masterpiece, I was tagged in an interesting post on Twitter (along with fellow Unbounder Jonathan Coe) by screenwriter and self-styled 'son of writer' Paul Diamond, regarding the chronology of the cuts made to the film in order to placate the producers. The information has come too late to inform The Continuity Girl, though that is perhaps a good thing. The novel already contains a detailed description of the ecology of deep lakes that's effectively used as a chat up line. I'm not sure I could have pulled off the same trick again using another example of extreme geekiness.

Unbound report on the project page that the novel is due for release in Autumn 2017. Looking out the window at the golden leaves of the sycamore across the road, and glancing at the date at the bottom of the screen, I see that that means now... However, with the cover still to come, I think it's safe to say there's still time for people to sign up as a patron so that their name appears in the finished book. If you know anyone who might like to be a part of this, please let them know about it as soon as you can.

No obvious images for this one (though there is the moodboard, of course). Here's a very boring snap from my last trip to the Highlands, but one that illustrates why I was there. This little hut appears in the novel, and the car park is the setting for the crucial moment when the protagonist of the 2014 plot meets the protagonist of the 1969 plot. There you go - a mild spoiler with which to sign off. 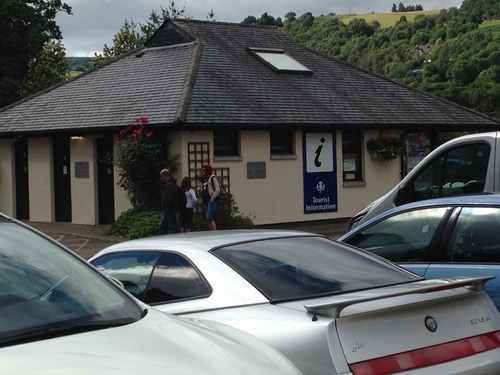