Sherlock's Muse, or A Gift to the Thirty-Percenters

30% in 17 days - that's really remarkable! To thank you and to celebrate, here's a second excerpt from The Continuity Girl, posted as an exclusive for those whose names will appear in the list of patrons in the finished book.

This time we're in 2014, not 1969. Gemma MacDonald, a London-based Film Studies lecturer, has been tasked with introducing the newly-restored version of The Private Life of Sherlock Holmes at a fesitval screening in Inverness. This scene sees her travelling north in a car with her family and boyfriend, trying her best to prepare them for a movie she loves perhaps a little too much... 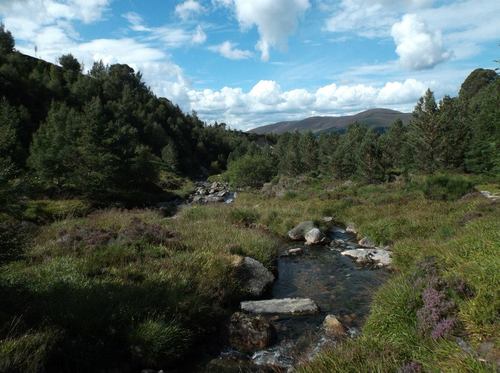 BACK IN the car, Dad has a choice of routes. Ever perverse, he decides against the more obvious splendours of the west and heads instead for the interior, on the A9. Splendour is relative, of course, and as they ascend into the Cairngorms and the landscape becomes a high tundra, like nothing else in the British Isles, Gemma’s breath is quietly taken away.

‘Any requests?’ asks Mum when the Brave CD comes to the end of its third run.

Gemma’s gained no end of Brownie points for bringing it along. ‘Is there something else you’d like, Destiny?’

Her niece shakes her head. ‘Going to play my game again.’

Gemma’s got one last CD in her bag and now’s the time to bring it out ‘Put this on, Mum,’ she says, passing it over.

‘What is it?’ Dad’s voice drips scepticism.

‘The soundtrack to the film we’re going to watch. Miklós Rózsa’s score for The Private Life of Sherlock Holmes.’

Gemma expects indifference at best and steels herself for worse. It’s always a terrible gamble, exposing loved ones to the works of art you love. It’s bad enough trying it with students—after all these years, she’s never got used to those palpable waves of boredom that emanate from nineteen-to-twenty-one-year-olds who aren’t able to meet the challenge of black-and-white photography, or silent cinema, or dialogue in a language other than English…

The brass fanfare gives way to the Baker Street theme. ‘This is Holmes and Watson,’ she explains. ‘The music is cosy, in a masculine sort of way. It represents their friendship, their mode of love.’

She does a Destiny and shrugs her shoulders. ‘I’ll shut up then.’

So she does. The tempo of the music changes and the violin theme comes in, a sharp ascending melody that refuses to resolve. She explains that this represents Holmes’s inner life, the loneliness of a mighty brain. But it also becomes the theme for Ilse von Hoffmanstal, who is perhaps his intellectual equal, but who is trapped in a nether world of espionage and deceit. She is a pawn played by higher powers, but so—unwittingly—is Holmes. Thus the theme unites them, even as their roles as agents of enemy states pushes them apart.

‘But we gotta watch Auntie Gem’s old film, yeah?’ she tells him. ‘That’s the only reason we’re here, ain’t it?’

‘You can always sneak your DS in.’

‘Nah—’ she’s stage-whispering behind her aunt’s back ‘—don’t want to make her cry, do I?’

As far as Gemma can tell, this is the first conversation David and Destiny have had together, and they’re using it to make fun of her.

‘It’s lovely, dear,’ says Mum, meaning the music. ‘I’ve heard something like it at the Proms, I’m sure.’

‘Well, you might well have,’ says Gemma. ‘Miklós Rózsa based it on his own violin concerto. The director was listening to it all the time he and his colleague were writing the screenplay. It’s where they found the film’s mood.’

Of course, there’s some truth in David’s accusation that she’s delivering a lecture. She remembers other times she’s discussed films with Dad, and he’s dismissed her arguments by accusing her of reading too much into everything: ‘You just need to enjoy it, hen.’

‘It’s romantic,’ she tells them, ‘and deeply sad. It’s about brilliant people whose brilliance means they can’t lead fulfilling lives. There’s this wonderful ballerina at the beginning who’s at the end of her career. She wants a family, but doesn’t understand that that isn’t something you can arrange through your manager. Then there’s Holmes himself, with his restless mind, which he has to stimulate with cocaine if nothing else comes along to occupy him. Relationships are too unpredictable, so he shuns them. Then there’s Ilse, who’s the most tragic of all. She’s stuck in a century when her genius is only valuable to her country because of her sex, which she is required to use to trap enemy agents…’

She does, but with a sense that her work here is done. Everyone in the tin can is listening to the music, and the sense of absorption remains for the rest of the drive through those heathery uplands, all the way to Loch Ness.