'Please grip this fact with your cerebral tentacle...' 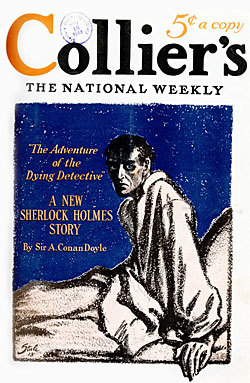 My short story 'The Doll and His Maker' was first published in MX Publishing's Sherlock's Home: The Empty House (2012). This collection, supervised by Steve Emecz and the BBC Sherlock fansite Sherlockology, was published to raise funds for the campaign to save one of Sir Arthur Conan Doyle's most important properties from what seemed certain destruction. Undershaw was where Doyle wrote some of the most famous Sherlock Holmes stories, including The Hound of the Baskervilles.

The day I heard that my little story had made it into the book was a red letter for me. This was to be my first published fiction. It meant I would share credit with a long list of other Sherlockians, including Mark Gatiss, Stephen Fry, and Douglas Wilmer. I made friends among them too, not least with author and blogger Charlotte Anne Walters (here we are together). We also, collectively, helped to save Undershaw - you can read all about that here.

Now Steve Emecz has very kindly agreed for me to include 'The Doll and His Maker' as a gift to those pledging for the SUPER PATRON PAPERBACK PLUS (eyes left, scroll down). It's been revised and edited now ('Nice story!' says the editor). Best if I say very little about it, but I will let you know that it's set during the Great War and takes its title from a doggerel poem Conan Doyle wrote in response to a reader who had mistaken Holmes's views on the fictional detectives that had come before (Dupin and Lecoq) for his own:

But is it not on the verge of inanity
To put down to me my creation’s crude vanity?
He, the created, would scoff and would sneer,
Where I, the creator, would bow and revere.
So please grip this fact with your cerebral tentacle:
The doll and its maker are never identical.

Things are moving apace with The Continuity Girl, so watch this space. There's still time to pledge and see your name in print as a patron, and it's also possible to upgrade and get a copy of this little tale with a twist.