From Dr Finlay to Downton Abbey: a short history of Sunday night nostalgia 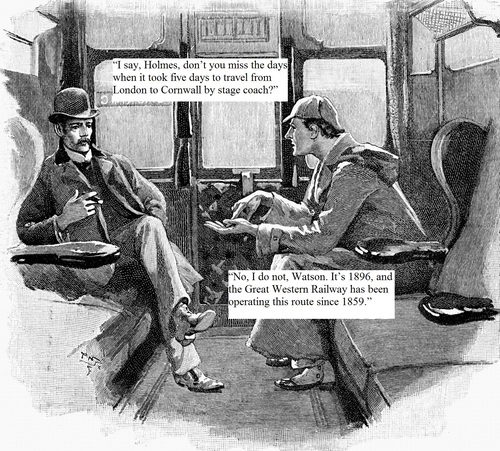 20 July 1969. You have to turn on your television set first, then sit down. You’ve had the set a few years, so it takes time for the tube to warm up and for the image to appear on the convex screen. There’s a distinctive smell—ozone and burning dust. Hang on, you wouldn’t smell that yet, would you? That’s how it will smell when it's been on for a while. You watch BBC1, because it’s what you were watching last night, and nothing short of a ‘DO NOT ADJUST YOUR SET’ card will get you out of your armchair again to retune.

First, you watch a news bulletin with the latest on the Apollo 11 mission, plus the weather. Then there’s a special edition of Songs of Praise from the Chapel of the United States Airforce Base in West Ruislip. The chaplain is from Louisiana and has a sense of humour. He makes a joke about beatniks. Then there’s the programme you’ve been waiting for: a forty-minute special that includes live footage from outer space. You witness a crucial moment in the helter-skelter race to be the first nation to set foot in the future. If you’ve been to the cinema to see 2001 A Space Odyssey, then it must seem like fiction is morphing into reality before your eyes as the lunar module separates from the command module and heads for the moon.

Then it’s over, and the continuity announcer tells you it’s time to head for Tannochbrae in the 1920s and another episode of Dr Finlay’s Casebook (1962-1971).

Is anything more unchanging than Sunday night TV? For fifty years it's been founded on ‘sentimental longing or wistful affection for a period in the past’—i.e., nostalgia. Anyone over 50 watching Dr Finlay that night would have been transported to the pleasant idyll of their childhood or young adulthood, a time before they were burderned with responsibilities. And perhaps their children and grandchildren, if they weren't doing something else, would have been caught up in the exoticism of a time before innovations in communications spread communities thin.

A decade after the moon landing, an 8-year-old me would have been watching All Creatures Great and Small (BBC 1978-1980, 1987-1990). For a while, I dreamt of being a vet, but only one from a different era to mine. I doubt it was the sight of James Herriot (Christopher Timothy) with his arm shoved shoulder-deep in a cow that persuaded me this was a good idea; I think it was more the strange little cars and odd clothes, the vistas of seemingly unspoilt countryside, and the general unharried happiness of everyone. This past was a foreign country, populated almost entirely by 'characters'. My favourite was Robert Hardy's Siegfried, a full-bodied Rioja of a performance, with every line delivered as though it needed to reach the gods in the Theatre Royal, whether it was out on the moors, at the breakfast table, or spoken into the surgery's candlestick telephone. Imagine being on the receiving end of that?

Nostalgia is always a kind of dream, but some dreams are at least lucid. All Creatures Great and Small was based fairly closely on the memoirs of a real vet, and took pains to recreate the period within the constraints of a BBC budget. Recordings of real news bulletins emerged from the Bakelite wireless sets, and eventually sent the characters off to fight in World War Two. By the time the series came to an end in 1990, it was the 1950s for the characters, who had been allowed to age with the actors playing them.

Compare that to the ITV series Heartbeat, which began two years later in 1992. Initially, it was also based on a series of memoirs—Nicholas Rhea’s Constable books—but that path to verisimilitude was quickly abandoned. Most episodes seemed set in every year of the decade at the same time, and the decade lasted 18 years. By the end, teenagers had inexpicably become 30-somethings despite time standing still. Nobody batted some much as a single mascara-thickened eyelash. By rights, the village pub should’ve been barring punks and skinheads, not rockers/mods/hippies (delete as applicable to any given episode at any point in its run). What must people who lived through the 1960s have thought of it? Unless that old saw is true, and anyone who can remember the decade wasn't really there.

But the most powerful grade of Sunday night nostalgia in recent years was supplied by Downton Abbey (ITV 2010-2015). Set beyond living memory, we might have expected its creator, Julian Fellows, to have engaged in the same rigorous research regime undertaken by Hilary Mantel for her historical fiction. But Downton Abbey isn't historical fiction, it's pure nostalgia, detached from both memory and recorded fact. If anything, it's a memory of other acts of remembering—i.e., dramas made forty years ago such as Upstairs, Downstairs (ITV 1971-1975; revived with only moderate success by the BBC in 2010) and The Duchess of Duke Street (BBC 1976-1977).

Perhaps if I’d been eight years old, I would have revelled in this fantasy of an entirely benign feudalism. I know, and am related to, plenty of people who did. There'd been a mild sort of hierarchy in All Creatures Great and Small, with educated professionals positioned above horny-handed men of the soil. But the jokes were usually on the former, when they found themselves socially, and sometimes literally (there was a lot of mud on those farms), out of their depths. Downton does something quite different. In fact, Lord Fellowes might have done well to draw his title from another verse of that Victorian hymn James Herriot's series got its name from: 'The rich man in his castle/ The poor man at this gate/ God made them high and lowly/ And ordered their estate.'

Watching the Downton Christmas special was for some years the price I paid for being allowed to watch Doctor Who earlier in the day. I couldn’t argue with the splendour of the costumes and locations, or with performances from the charismatic likes of Maggie Smith, Hugh Bonneville and Phyllis Logan. But it was all I could do not to shout lines from the Communist Manifesto at all the forelock tugging and aristocratic magnanimity. At times, the show’s engagement with the passage of time was unintentionally hilarious. My own faulty memory has turned one inelegant bit of dialogue into this: ‘Of course, being a woman, I have very few rights compared to you men, at least until the suffrage movement and the First World War forces a change in women’s roles, which will lead to the vote and the first woman MP…’ At times, the series’ grasp of chronology was little better than Heartbeat's.

Is it wrong to be so bothered by all this? Surely Downton Abbey is just a bit of well-mounted entertainment. Well, it is—but It’s hard not to see the country’s current obsession with a pretty much invented past as dangerous. That myth of a happy country with rich men in castles and poor men at gates—a myth that carefully excludes slum dwellings, infant mortality rates, atrocities in overseas dominions—is bloody powerful, and right now is being played for all it's worth.

So, what of 20 July 1969, and my own contribution to this national nostalgia binge? In The Continuity Girl, the hero isn’t keen on TV and leaves after the end of the Apollo 11 special to go to a very happening ‘moon party’. He doesn’t fit into the crowd there, but eventually another TV set is turned on and he's able to watch Neil Armstrong step onto the moon's surface. If he had stayed at home and watched Dr Finlay, he might also have watched The Black and White Minstrel Show (1958-1978), a work of nostalgia that’s more bizarre than anything on offer today. We misremember the 1960s if we imagine it was without its own strange yearnings for the past.

But the decade’s keynote—the one politicians struck when they wanted to appeal to as many people as possible—was of innovation. Harold Wilson won the election in 1964 promising to take advantage of technological advances while they were white hot. Three years earlier, Kennedy had promised to put a man on the moon before the end of the decade. This was a time when the young—ironically, the 'baby boomers' now seen as a crushing force of reaction—drove popular culture and kept it changing, even if they didn’t entirely exclude Frank Sinatra and Perry Como from the charts. Listen to The Beatles in 1963, 1966, and 1969 and they sound like three different bands from three different eras. The generation gap was stark by the end of the decade, but this was not a time when the young could be ignored. There were too many of them, and they were actively engaged in taking a stand against wars abroad and social inequalities at home.

I would be lying if I said I didn’t feel the tug of nostalgia while I was writing my novel—a nostalgia, let’s not forget, for my parents’ decade, the time just before I was born. I have tried to mix it up, and to avoid telling those same old lies about consensus and uniformity. And I have done my research. Not quite the reference-card system favoured by Hilary Mantel, but there was a lot of reading nevertheless. I am very aware of when I've stretched the timeline of the specific thing I'm writing about, and have shuffled events to make them fit in with the fictional parts of the story. Being in contact with people who were actually there has forced me to make such decisions carefully.

The other thing I’ve done is add a framing narrative, set in the present day (well, 2014, which presents its own problems). This means I haven't been tempted to apologise for my 1969 characters' lack of prescience about which of their views will be considered beyond the pale in the 21st century. I have been able to present them warts (and velvet jackets, and backcombed hair) and all. I'm trying for a historical novel (see fellow Unbounder Simon Miller's recent blog to see how I may or may not qualify), but let's face it, there's nostalgia in it, too. It's a potent drug, and that early exposure to a 1930s vet with his arm stuck in a cow isn't something I can shrug off easily.