All's Fair in Love and Monster Hunting; or a Gift to the Three-quarters

Here's another excerpt, available only to those who have already pledged. The campaign is reaching the end of its initial phase, but the progress has been wonderful and I fully expect to hit the target sometime in the next few weeks.

Look out over the next couple of days for a video interview shot at Big Comfy Bookshop in Coventry by my good friend Alex Breeze. In it, I play the part of a man who knows what he's talking about. The questions come courtesy of Heather Kincaid.

This excerpt returns us to 1969. Jim's affair with April is in full swing, but he's disturbed to learn that she has taken a tour of Loch Ness with a former colleague who is now a rival monster-hunter... 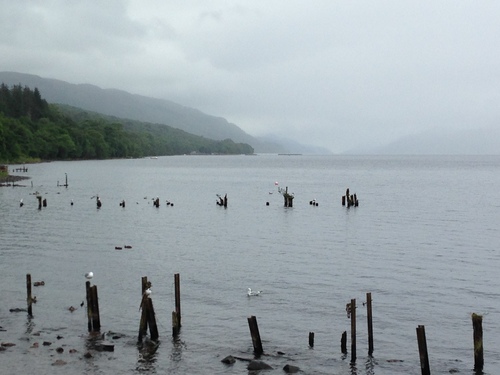 He told her about Stewart McAllister while they were lying in bed. ‘A walking, breathing warning to all scientists.’

‘Because he believes in the Loch Ness Monster?’

He shrugged. ‘I’m not sure what he believes in. He was just determined to make the evidence fit his crackpot theories.’

He explained how Stewart and Douglas had set up the Loch Ness Research Group in 1964, after meeting at a conference in Cambridge on recent discoveries in the Amazon basin. During lunch in some panelled refectory, conversation had turned to the coelacanth: the armoured fish, long thought extinct, which had turned up in the catch of a South African angler in 1938. They’d then speculated about what other ‘living fossils’ might be due a return, and naturally someone had mentioned the Loch Ness Monster. Stewart had told Douglas that his family pile stood on the banks of Loch Morar, that other home to the kelpie or waterhorse, and the rest had spooled out with the inevitability of one of those green-backed Greek tragedies on the bookshelf downstairs.

‘He was still with the group when I started,’ Jim told her, ‘but tensions were already running high. He was touting a manuscript around publishing houses in which he claimed that he’d solved the mystery of Loch Ness. All the evidence pointed to the monster being…’ He stopped himself. ‘I can’t make myself repeat it.’

My God, he thought, she could make me do anything.

‘He’d come up with a sort of chimera,’ he said, ‘by grafting together all the bits and pieces people have claimed to have seen over the years. A neck from here, a tail from there, a hump from somewhere else. A bloody diamond-shaped paddle, for Christ’s sake—something no animal has ever had. It was hard to tell how much Douglas disapproved, because…Well, you’ve met him, haven’t you? Then, one morning, I woke up and Stewart was gone. “We thought it best we part ways,” Douglas said, very matter-of-factly. “A disagreement over methodology.”’

‘Did he find a publisher?’

Jim nodded. ‘Not a reputable one, of course. Some spit-and-sawdust merchant in Edinburgh. Then, a year ago, he turned up on the loch in a boat of his own. Calls himself the Loch Ness Research Institute, would you believe.’

‘Well, I do believe, because that’s what he told us he was when we went on that tour with him.’

She slipped out of bed and Jim had to stop himself looking away. Then he had to stop himself from just staring. All he could think of now was that this was his third love affair, and that nothing in the other two had done a thing to prepare him for it. The girl he’d been with during his third year at Manchester hadn’t allowed him see her completely naked, even while they’d been sharing a bed. The one in Aberdeen had sighed heavily at the end of their second date, and had said, ‘Oh, all right, then’, as though he’d been badgering her for sex the whole night, which he hadn’t been. And then she’d treated the whole thing like some horrible ritual that needed to be got out of the way, so they could move on to important matters like arguing about who should do the washing up.

How different was this to all that.

With April, there were no such awkwardness. In fact, oddly, there was very little of anything: the beauty of it was in the absences. There was no sense of performance, no struggle for any sort of attainment. Instead, there was a sort of slackening of the self… It was almost as if maleness and femaleness didn’t exist. How could that be? There certainly wasn’t an absence of sex. Things just seemed to unfold in the right sequence and in their own time. Things simply were.

She’d picked up the volume from the chest of draws and had opened it. He liked the image she presented now, fused with the sunlight that was filtered through the yellow curtains, so that she seemed just as golden.

‘Not all the time,’ he told her. ‘Just when the mood strikes.’

‘What are they like?’ She was leafing through the pages.

‘Well, even I’ve seen those. The stories are much better. Or most of them are, anyway.’

She brought the book with her back to bed and joined him under the sheet again. ‘Which are the good ones?’

He took it from her and flicked to the contents pages. ‘That one,’ he said, pointing to ‘The Speckled Band’. ‘The villain is Dr Grimesby Roylott, a real bounder. Murders a stepdaughter and tries to murder another. “Thor Bridge” is a very good puzzle, almost the perfect crime. “The Greek Interpreter” has Sherlock’s brother in it, Mycroft. That’s who Dracula’s playing in your picture, isn’t it?’

‘But the best is the first one I read. “The Man with the Twisted Lip”.’

He struggled to find a way of putting it. Literary criticism wasn’t something he’d been required to do for ten years now. ‘Nothing’s what it seems,’ he said. ‘It starts as one kind of story and turns into another. Dr Watson is called out to rescue his wife’s friend’s husband—’

He wagged a finger at her. ‘Pay attention, Miss Bloom, there’ll be a test later. He’s gone to rescue his wife’s friend’s husband, who’s stuck in an opium den near the London docks, where only a man can possibly venture. It’s quite an exciting set up, but all that’s forgotten within a page or two. Sherlock’s in the den, but Watson doesn’t recognise him at first, because he’s in deep cover. Actually, though, nobody’s who you expect them to be. Even Watson’s not really a doctor, he’s an amateur detective. And as for the title character… Well, I shouldn’t give it away, should I?’

She shrugged, and since he was warming to his theme, he carried on.

‘There’s another desperate wife who goes looking for her husband in the banking district,’ he told her, ‘but then she turns a corner and finds herself in an alley full of squalid lean-tos, leading to the docks. Even the city has got two faces, you see. One minute she’s among gentlemen in frock coats and top hats, the next she’s being menaced by swarthy foreigners...’

April took the book back and leafed through the pages again. ‘Is Geneviève’s character in here?’

He shook his head. ‘Haven’t come across her. There’s Irene Adler, of course.’ He explained about her, then got April to turn to the right page.

‘“The woman”, huh?’ She pored over the opening paragraph for a while. ‘Can’t believe there’d be room in Sherlock’s life for both an Irene Adler and an Ilse von Hoffmanstal.’

Music from the record player, a plucked rhythmic guitar, began to seep up through the floorboards from the living-room. Sandra must be home. What was she listening to? He was pretty sure it wasn’t the Beatles. Then the song proper began and he recognised the nasal drawl. It was a request by the singer to give his regards to some girl he’d once known in the north country.

‘So, we don’t have the house to ourselves anymore,’ said April.

She put the book down on the floor. ‘Guess that means we need keep the noise down, huh?’

And before he could answer, she leaned in and kissed him.