Among the first people to show an interest in The Continuity Girl when it started funding with Unbound was someone who had reason to be wary of it. As I've mentioned a couple of times, the novel is partly set on the banks of Loch Ness in 1969 during the location shoot for Billy Wilder's The Private Life of Sherlock Holmes. Paul Diamond was there, and not only as an onlooker. His father, IAL Diamond, was the movie's co-author. 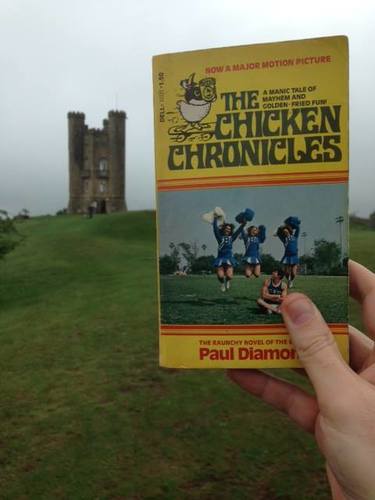 Paul would go on to become a screenwriter himself. In the late 70s, he turned his novel The Chicken Chronicles (pictured above - the hand is mine, and I'll say more about the structure on the top of the hill in due course) into a movie that co-starred Phil Silvers and introduced the world to Steve Guttenburg. You'll need to go to Paul's IMDB page to find the rest of his credits, which are legion, but I would like to mention his contribution to Miami Vice. Paul is responsible for the only bit of dialogue from that show that I can remember, and it involved Phil Collins's character - Phil the Shill - using a peculiarly British insult that had not previously been heard on prime-time US television.

Anyway, after months of badgering Paul for information about the '69 shoot, I thought it was about time I let him see what I had done. I was nervous about this - more nervous than I'd been sending relevant sections to Adrian Shine, the Loch Ness investigator. What if I'd got it so completely wrong that even a plea of 'poetic licence' wouldn't cut it? Well, like Adrian, Paul did have some things to say, which I have duly taken note of in my final edits (NB - any extant mistakes are still mine). But he also said this:

Mr. Kincaid has given us a remarkable, sweet and romantic first novel, his feet planted firmly on both sides of the Atlantic. (Don’t attempt this without stretching for several minutes.) He’s recreated, almost without flaw, the milieux of the pre-Brexit UK and late Sixties Scotland, specifically the Loch Ness set of Billy Wilder’s lost classic The Private Life of Sherlock Holmes. I can vouch for this accuracy – I was there behind the scenes of that picture. Well behind the scenes. With orders not to touch the scenes. Where was I? Right. A nuanced story of four people from seemingly-similar but heartbreakingly different worlds reaching out to each other across the years. Also it’s funny as hell.

I'll certainly take that for a first review.

Oh, and the story behind the photo? The building in the background is Broadway Tower in Worcestershire. After the crew relocated from the Highlands to Pinewood in the autumn of '69, Wilder decided he needed one more shot for the sequence in which Holmes, Watson and Madame Valladon visit a series of castles. Rather than return to Scotland, IAL Diamond took a unit to the Cotswolds and made his directorial debut, from more or less the spot that I'm standing on here.

The Continuity Girl is being serialised by The Pigeonhole from Monday. There are still a few free slots left, so you - or someone you know - can still join in the fun of a live reading over ten days. If you're a reader of contemporary fiction and don't know about The Pigeonhole, I urge you to look them up. You can find them on Twitter and Facebook, too.

For everyone else, I hope to have news of the launch date and concomitant events (i.e., a party) very soon.